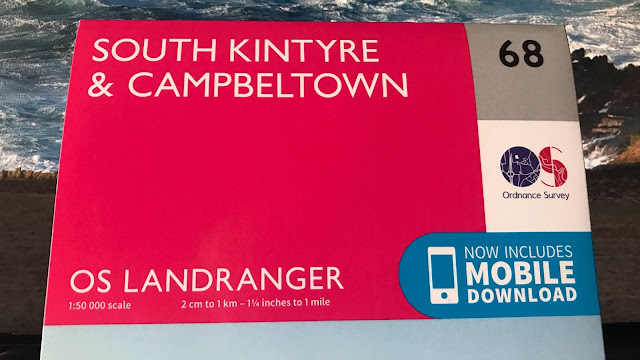 Continuing what is becoming a grand (but virtual) tour of the Scottish coastline, by moving just a few miles south from Jura & Colonsay to the Kintyre Peninsula and the Isle of Arran.  There's a small (but inevitably virtual) prize for anyone who can see reference to the "Mull of Kintyre" without hearing that song.  And you really don't want to Google "Mull of Kintyre Test".

The Kintyre Peninsula stretches south from the Scottish mainland towards Northern Ireland, by the time you reach Southend you're probably no more than 15 miles from the Antrim coast - close enough for this to be one of the 'suggested' sites for the "Northern Irish Bridge". Much of southern Kintyre coastline is defended by cliffs with just a few gaps where roads come down to the water.

Getting to Southend (the little village at the south end) is a bit of a haul - if you want to get here by road from the Scottish Central Belt, you'll wind up needing go along the bonnie, bonnie banks of Loch Lomond (there's another ear-worm for you) then round the top of Loch Long and Loch Fyne before starting to make your way back south towards Campbeltown.  There is, according to some sources, the alternative of a direct ferry from Troon or maybe Ardrossan, or more credibly via Arran. And you might even be able to fly directly into the wee airport outside Campbeltown - once (like so many Scottish island airports) an RAF station - RAF Machrihanish - which had very long Cold War-era runways.

In addition to the cliffs and the airport, the two other features leap out from this Landranger sheet are the extent of woodland, and the number of wind turbines on the peninsula - these are in two major wind farms, one at Tangy on the west coast with 20-odd turbines and a bigger one (60-something turbines) at Beinn an Tuirc.

If you have the urge to visit under your own power there is the 100-mile Kintyre Way which twists it's way from Tarbert (on OSL 62) down the peninsula to Campbell then round the east and south coast before ending up at Machrihanish.


A feature this areas shares with both Sheet 61 and with Sheet 28 from earlier in the tour (maybe this is becoming a grand whisky tour!) is a distilling tradition.  Once long ago there were numerous distilleries in Campbeltown, but my notes tell me that there are only three left.

On the eastern edge of the sheet - maybe half a dozen miles across Kilbrannan Sound is the Isle of Arran.  Arran does get an OS Landranger Sheet (number 69) all to itself, but on the edge of Sheet 68 is just a taster of what awaits if you head further east.  The impression you get from comparing the two bits of land on each side of the Sound, is that Arran is a more rugged version of Kintyre.  There's a similar mix of forestry land and open land, but the contours are much more closely packed on Arran.  The highest point (I can see) on Kintyre is about 450m above sea level, while I can see (on this sheet) spot heights up to almost 800m on Arran.

Visit?  Not yet.  I'm a wee bit embarrassed to not have visited either Kintyre or Arran.  It's got to be on the post-Lockdown tour - not least for the fresh whisky supplies.

And while I'm there - I might need to figure out how to get to Sanda Island (off the south coast of Kintyre) - it appears to have both a pub and an interesting looking lighthouse.