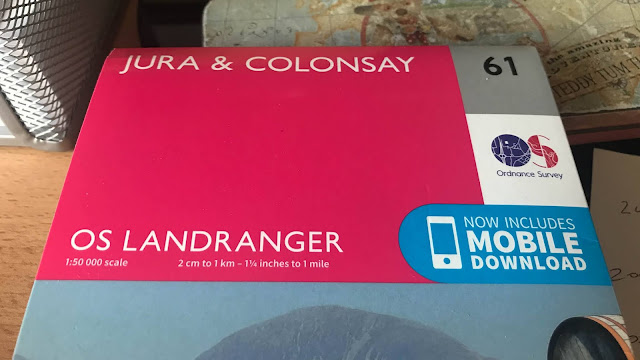 From the far north to the west coast.  This sheet has just as much blue as the previous sheet on the tour - and it includes several islands - the two headline islands (Jura & Colonsay) plus a bit of Islay too.

Jura is about 30 miles long (it fits rather neatly onto a single OS Landranger sheet) - and can be summarised as having "one road, one hotel and one distillery". The one road goes from the ferry port (just across from Port Askaig on Islay and runs round the south coast of the island, up the east coast past the Jura Distillery and the Jura Hotel (both in the main (only?) town, Craighouse) to Lussa Bay.  The landscape is pretty bare, except along the road where there are some bits of woodland, with the most memorable feature being the Paps of Jura (where you'll find, what might be, the one trig point, at 785m).

If you want to venture on past the end of the road, there is a track - and once that peters out, you can keep going up to the northern tip of Jura, you'll then be overlooking the Gulf of Corryvrecken - with a notorious whirlpool.

Further west from Jura is the even more remote island of Colonsay - it's a lot smaller than Jura (only about 10 miles from end to end, but has a similar population - it's also got one hotel and one distillery (gin, this time) and does at least have a loop of single-track road.  The island is pretty low lying (the high point is less that 500 feet).

Along south west coast of Jura is the narrow Sound of Islay, separating Jura from Islay.  At the narrowest point of the Sound (on the Islay) side is Port Askaig, where the ferry from Kennecraig on the Scottish mainland comes in - and the first thing you'll notice when you get off the ferry is that there are real two-way roads (with paint down the middle and everything), the second thing you'll notice are the signs to the distilleries. Islay has something like 10 distilleries, two of them (Caol Ila & Bunnahabhain) on the bit of Islay that's on this sheet.

And have I visited this sheet? Yes, but only once many years ago.

I spent a few days on Islay - arriving via Port Askaig, and staying somewhere around the south end of Islay (not on this sheet) - but my recollections are vague, and I've not been able to track down any photographs I took there.  Both Jura and Colonsay are still on my 'must visit' list.