So, we're now officially in Covid-19 lockdown.  We're only supposed the leave the house for essential errands - and for one fix of exercise a day.

It is strange how rapidly one starts to adjust to the new normal.  For most of the week I've been getting up at the usual time, then going out for a long-ish walk with camera in hand before settling down at my home desk with a large pot of coffee to do the usual email and meeting related work activities (using a variety of different online meeting tools).

If I was looking for positives - the main one has been having a proper lunch break each day rather than grabbing something at my desk.  It has also helped that the Oxford weather has been good all week, so the morning walk hasn't felt like an ordeal.

Over the last few days, I've found it more relaxing to stick to the Headington streets rather than the lanes that would be my usual choice for a local walk.  The lanes are fine if you have them to yourself - but if you meet someone there is really no chance to being able to stick to the 2 metre separation 'rule'. Mind you some folks seem to have a pretty strange idea of what 2 metres might look like - am tempted to wander around brandishing a walking pole to enforce my view of what 2 metres looks like.  Last week I was threatening a lot of pictures from the C S Lewis Nature Reserve -  this week I'm taking the view that it's out-of-bounds because the paths are just too narrow.

To add some variety to the local walks, I've been finding different routes each day - and I've been trying to find a photographic theme for the walk each morning - today I was looking for blossom. 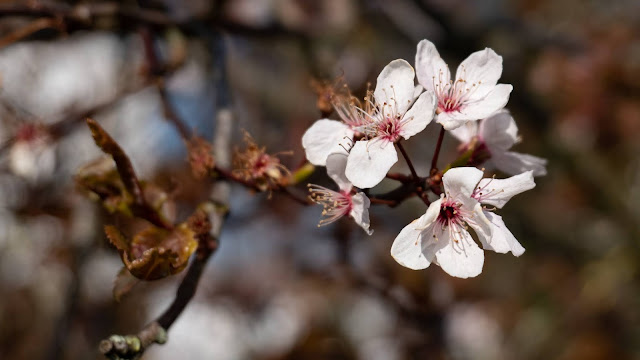 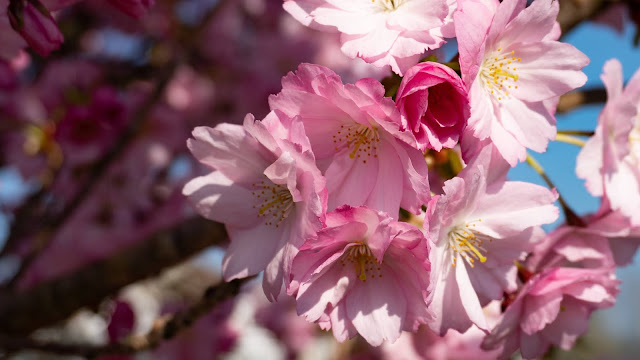 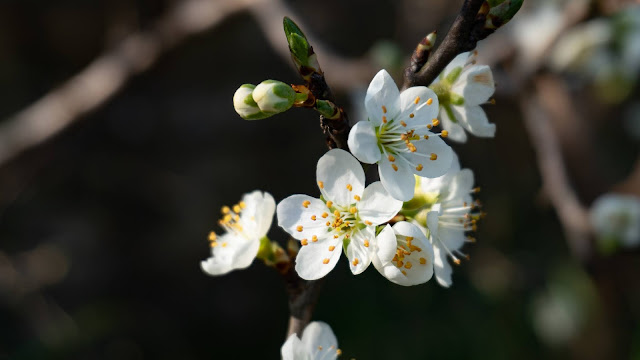 The other innovation this week has been starting to get groceries delivered to the house rather than facing the supermarket crowds (not that I've been doing that, I'm still grounded).

Over the last year I've got coffee quite regularly from a coffee roaster in Witney, since things have gone strange they've branched out into groceries - and do a local delivery which includes Headington.  Highly recommended if you're in the area - UE Coffee Roasters.  Their delivery this morning included lots of peppers (which rapidly became a pepperonata) and some lovely sourdough bread. 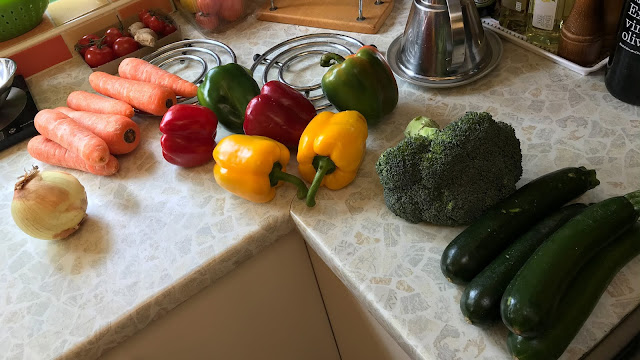 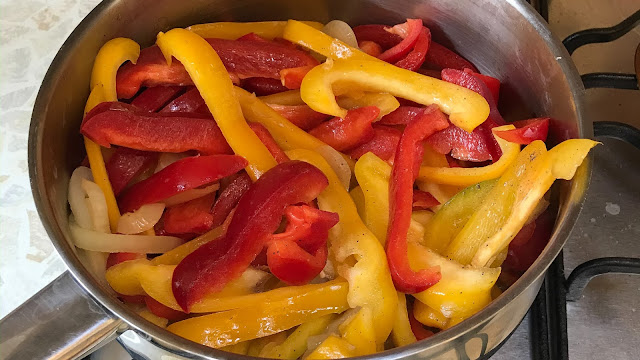 The other highlight of an otherwise housebound day was the chance to watch the bird activity around the garden - a coffee break down the garden provided magpies, starlings, blue tits, lots of house sparrows, robin plus blackbird, joined a bit later by long-tailed tits and jackdaw. 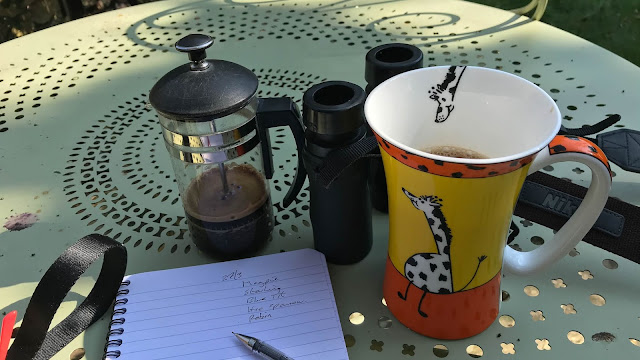 They say that a week is a long time in politics - but when I re-read my blog from last Friday it really is remarkable how much has changed in the last seven days.

1. I've now been told that I'm going to be working off-site.  Initially that was to be until the end of April, then (because I'm "vulnerable" - I'm not taking well to that description) it's for the next 12 weeks (until mid-June).

2. The May walking trip in Germany hasn't yet actually been cancelled - but I'm expecting both that and the July trip to Italy to be canned at some point.

3. The coffee bar where I typed last weeks post has put the shutters up.

4. I didn't get to go to the airport this week - I've currently no idea when I'll get back up to Shetland

5. I assume the concert (I didn't go to) got cancelled.

I grumbled last week about the lack of certainty - I'm not sure I'm much happier about the short term clarity.

At one level I'm OK about Working From Home (although I need to get better at being clear when I'm working and when I'm not), I'm mostly OK about Social Distancing (truth be told it's probably my default setting anyway).  What I'm not OK about is the lack of mobility.

I'm not good at being told that I can't go places - whether it's local, to the other end of the country or to the other end of world - I want the option of going.  UK government advice is pretty clear about only making essential journeys (although I'm not aware that that is being enforced yet) but crossing international borders looks as if it's pretty much a non-starter at the moment.

So, what have I done to combat the 'cabin fever'?

Over the last few days, I've made contact with quite a few friends around the country - really just to check that they're doing OK - but somehow maintaining these links at least by social media seems more important than ever.

I'm also trying to keep up my regular walking.  At the start of year (back in the days BC - Before Corona) I set a target of doing 2000 miles this year - about 5.5 miles a day (or about 450 lengths of the back garden).

So far I've not needed to resort to pacing the garden, and I've tried to get a walk each day this week before I open the work inbox.  I suspect that I'm going to be posting a lot of pictures from the C S Lewis Nature Reserve over the next few months.

The walk this morning took in the C S Lewis Reserve plus Shotover Country Park. 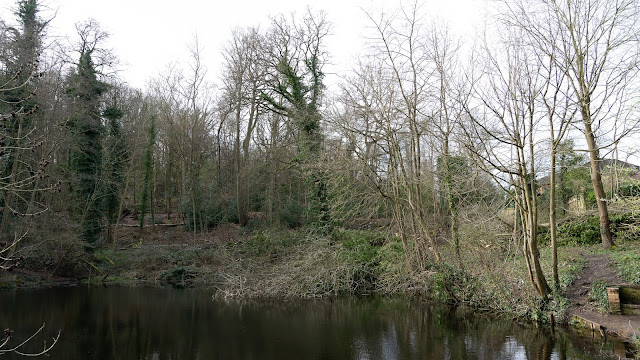 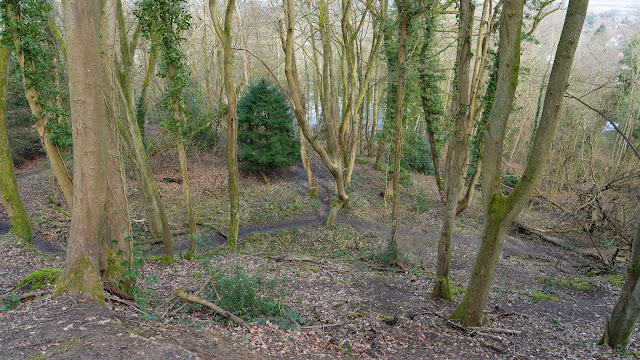 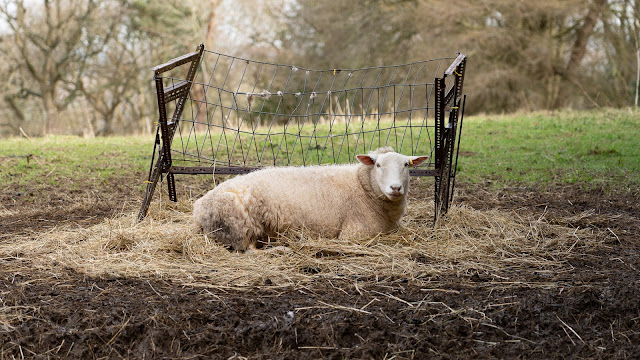 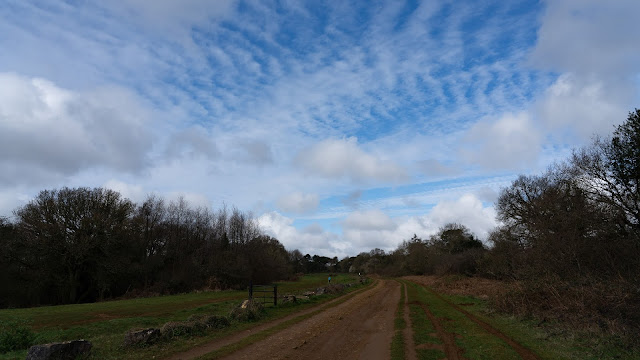 When I’m not off exploring places, with a camera, on a Friday, I’m usually to be found plotting and planning future trips.  And rather unusually the planning this year has gone rather further into the future than has been my habit recently.  I had got into the pattern of planning from month to month - so it came as a major shock to find that I have been booking trips 6 or 8 months into the future this year (in addition to the usual ‘what am I going to do next month’ planning).

Then Coronavirus.  Which is pretty much throwing everything up in the air.  So much for forward planning.

I’ve spent much of the week expecting to be told to go and work offsite - or to find that I need to self-isolate.  Neither have happened (yet).  It’s not clear if international trips planned for May (or indeed, July or September) will go ahead.  It’s even less clear if UK trips later this month can - or should - go ahead.

I’m pretty unconvinced by the (UK) Government assertion that we should (effectively) keep calm and carry on (or is it closer to an extension of “we won, suck it up”).  Seems bizarre that pretty much every European country adopts the same approach but the rampantly contrarian UK Government does the opposite just because.

I’m angry that this is happening at all - I’ve got my plans, stop messing them up. I’m not sure who exactly I’m shouting this at.

I’m frustrated at the uncertainly.

Do I just carry on as normal, and what does that mean?

I’m sitting typing this in my local independent coffee bar - does this qualify as reckless behaviour these days?

Is it a good idea to head to an airport next week?  I’ve got concert tickets for next week too - that doesn’t seem too clever at this point.

I’m torn between the desire just to carry on and the realisation that avoiding other people might be a good idea. 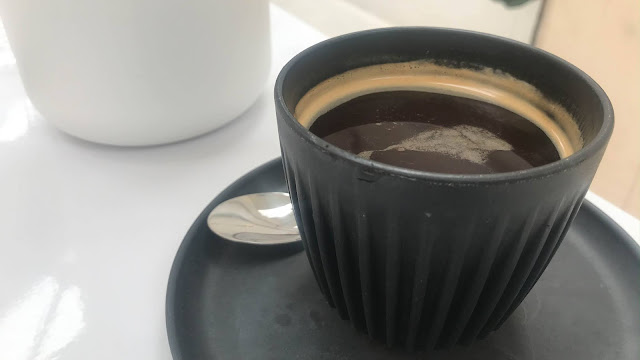 In the meantime, I'm planning to try to Keep Calm and Drink Coffee. And to Wash My Hands. Again.
No comments:

Doesn't everyone start planning their next trip before they get home from the previous one? Unless of course they've already got the next trip planned.

There are already plans in the diary for later in the year - but they seemed way too far away so shorter term action was needed.  This turned into a Friday trip (virus panic not withstanding) into London, to spend time in Stanfords.  I'm pretty sure that every trip to somewhere new, involves time browsing the shelves and map racks there.

Over the years I've spent a lot of time (and, truth be told, money) in the shop - and I still have a soft spot for the old shop even though I'm pretty sure that the new one probably has space for more stock.

I'm not sure that I yet fully understand the logic behind Kompass maps - they don't work quite the same as Ordnance Survey ones - but I'm sure I'll get used to them.

Having stocked up on maps for later in the year - it seemed like a good time to wander in London (and to burn off a little of the surplus strudel).

The Same. But Different.

Four years ago we spent an idyllic week in a splendid hotel near the Achensee in the Austrian Tirol - and as so often we said “we must go back” but it was tinged with the thought that it couldn’t be as good again.

It’s taken a while, but eventually we decided to go back - but this time to see Pertisau in it’s winter guise.

Our first visit to Pertisau was in May 2016 - and at that time of year it really is a lakeside resort - lots the activities revolve around the water and the regular ferry services that chug up and down the lake (and the old steam railway that brings people up the hill from Jenbach).

A winter visit to Pertisau is very different.  The resort turns it’s back on the lake and looks towards the mountains, and now it’s all about snow.  There are lots of downhill skiing options, an excellent network of cross-country skiing routes and a great network of winter walking trails too.  I was fully expecting to spend time on skis on this trip, but the winterwanderweg were so good that we wound up sticking to these.

And in both seasons there also the Almen to visit.  There were, once upon a time, the refuges used by farmers when they were looking after their flocks in the high pastures.  These days they have been developed into cafes/guest houses/mountain resorts when the exhausted(!) walker or skier can stop for fortification (in the form of soup, coffee, beer and - of course - strudel ).

Will we go back again? I'm pretty sure we will.

But it might take a while to decide if it’ll be in the summer or winter.