One of the bonuses of a trip to Greenland is that you can’t fly straight there from the UK.

The last couple of the visits involved city breaks in Reykjavik and Ottawa (yeh, not the most direct route that one) - this time the lucky winner in the city breaks lottery was Copenhagen.

On the way to Greenland I opted for the hotel closest to the airport (which was about 6 minutes from the terminal by S-train), on the way back I decided that a rather longer stopover in the city centre was in order.  I had the added bonus of my other half joining me there and a collection of local relatives who were able to step up to ensure that we got a proper tour of the city.

Copenhagen is a fabulous city for a quick city break - everything is walkable, and getting in to the city centre from the airport takes less than 15 minutes.

We spent time in numerous food markets (Paper Island is fantastic) and bars - and found time to watch the changing of the guard (it’s not just at Buckingham Palace), visit New Harbour (not so new these days - started in 1670-something), have a boat trip round the harbour, visit the Little Mermaid and wander the (slightly suspect) streets of Christiania.  And try a few of the 61 beers on offer at Copenhagen’s Taphouse.

And next time we’ll make sure there is time to visit Tivoli rather than just go past the gates.

And on the theme of next time - I think Hans Christian Andersen was right - and we should be doing more city breaks (as well as the longer ones!) 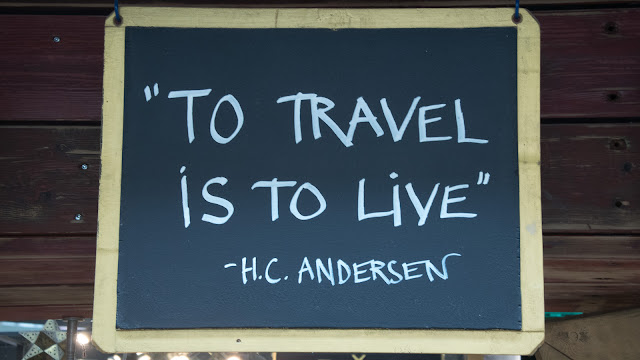 My first visit to Ilulissat was as a stop-off point along the Greenland coast on the way into the Northwest Passage.   My recollection was of being somewhat underwhelmed by the Ilulissat weather - which could most charitably be described as dreich.  It’s taken me a few years to sort a visit back to the west coast of Greenland to see what the weather can be like!  This time I spent a week in and around Ilulissat - with near-cloudless blue skies every day, and the one brief shower of rain was snow!

Ilulissat is the tourist centre of Greenland - the business and administrative centre is Nuuk a few hundred miles to the south, but the tourist magnet is Ilulissat and particularly the Icefjord on the southern edge of the town.  The Icefjord was designated as a UNESCO World Heritage Site in 2004, and has been key to many tourist activities developed in the town to complement the traditional hunting and fishing industries.

The vast majority of the town’s tourists arrive on cruise ships throughout the summer - almost all are little expedition cruise ships, but occasionally larger ships are now adding Ilulissat to their itineraries. The arrival of even a small ship transforms the town, filling the streets with yellow- or red-clad visitors depending on the boat visiting.  Having been a red-clad visitor in 2013, this time I was in town as an independent ground-based tourist.

There are a limited number of routes to Greenland.  In 2013 I flew into Kangerlussuaq on a charter flight from Ottawa, this time I flew in from Copenhagen on Air Greenland’s only big red plane.  From there I caught one of their little red planes into the little airport just outside Ilulissat town.

The recent surge in ground-based tourism does rather seem to have out-paced the development of hotel rooms.  I struggled to find somewhere to stay for week in July or August, so I wound up booking a little apartment in the town centre in September.

September is definitely the end of the Summer season - the temperatures are significantly lower (mostly around freezing), but the real plus is that the falling temperatures see off the mosquitoes and black flies which can make wandering in the Arctic unpleasant in summer

With one or two minor exceptions you can walk pretty much anywhere you want in hills and valleys around Ilulissat, but the local hiking clubs have defined a series of way-marked routes going from the town to various points along the northern edge of the Icefjord.

The Icefjord is a deep inlet from Disko Bay reaching right up to the edge of Greenland Icecap about 70 kms inland.  This channel is the most ‘productive’ single route for Greenland ice to get to the sea accounting for 7% all the ice output (this equates to an implausibly large number of tons of ice flowing out to sea each day).  Traditional anecdote suggests that it was an Ilulissat iceberg that met with the Titanic in 1912.

The settlement at Ilulissat has been around for about 275 years, but people have lived near the Icefjord for thousands of years - the bay at Sermermuit just beside the Icefjord has evidence of houses almost 4000 years old.

The glacier front has been moving inland quite dramatically over the last few years, but the appearance of the icefjord has been pretty much unchanged. For most of its length the fjord is well over 1000m deep, allowing even huge icebergs to calve from the front of the glacier.  Having calved the icebergs are then free to float towards the sea.  Or at least they would be were there not a seabed ridge at the mouth of the fjord. This ridge blocks the big bergs from reaching the sea and in turn leads to fantastically dramatic iceberg traffic jam backing up the entire 70 km length of the fjord.

From one of the viewpoints outside the town you can see the front of the queue, which at times is a 10km line of icebergs across the entire width of the fjord.  At a glance (or two) everything looks pretty static but if you return day after day you will notice that new icebergs have broken free and are now making their way out into Disko Bay (no doubt aspiring to make their mark as in 1912).

Occasionally as you sit watching the ice you might just hear a crash of ice somewhere in the distance, and if you get really lucky you might just see one of the bergs at the front of the queue disintegrating as the pressure from behind finally gets too much.

The crash of ice isn't the only thing you’re likely to hear around Ilulissat.

If you sit quietly you might also both see and hear one of the many humpback whales around the bay coming up for air. The seabed around the fjord mouth is constantly being churned up by the icebergs crawling their way across the ridge - this make the waters around the fjord incredibly fertile - which means lots of food for marine life right up the food chain, including both whales and the local fishermen.  So if you can’t hear a whale blowing you’re probably going to be able to hear an boat motor somewhere on the water.

The other sound that characterises Ilulissat (and most other Greenlandic towns) is of the dogs.  Ilulissat has a resident population of about 5000 people and about 6000 dogs.  During the winter the dogs eat well and work hard pulling sledges - but in summer they don’t get so much to eat (they wouldn’t work it off!) and they are chained up on the edge of town.  This makes the dogs a little bit cranky, and once one starts howling its very likely that the other 5999 are going to follow the lead.

The one except to the chained-up rule are the young puppies.  The puppies get one summer where they can wander at will around the town causing the mischief that you would expect from a couple of hundred puppies!

The other bonus of visiting places like Ilulissat in the autumn is that it gets dark!  In summer you get 24 hours of daylight, but in September you get both sunrises and sunsets.  And if you get really lucky you’ll get a display of the Northern Lights too.

Most people who visit Greenland do so as cruise ship passengers - this undoubtedly makes the visit logistically easy (although not cheap) and means that although you get to see lots of places you only get a glimpse of each.  Visiting Greenland as a ground-based tourist is easy to do and means that you get the chance to spend longer in places - and also to see them without the crowds of other tourists. I’ll certainly be back in Greenland at some point again.