Well, I didn't intend to let the festive period interfere with the regular Friday blog posts.

I did however plan to spend rather more of the Friday outside than turned out to be possible.

Plan A was a quick drive from Oxford to Surrey, then back to Oxford for lunch and an afternoon walk - trouble was that I'd rather overlooked the fact that the entire population of the UK (slightly exaggerated for effect) also wanted to use the M25 or the M40 (or to sit in the queue at Beaconsfield Services).

The drive south was OK, but when I checked the traffic to pick a return route, every option was showing long delays.  This didn't really fit with my plan to get an Oxford walk, so I opted to get a wee fix of fresh air along the towpath of the (partially open, I think) Basingstoke Canal before heading north.

This was a very peaceful - and good head-clearing - way to spend a bit of time.  And, of course, it was peaceful (everyone else was already on the M25). 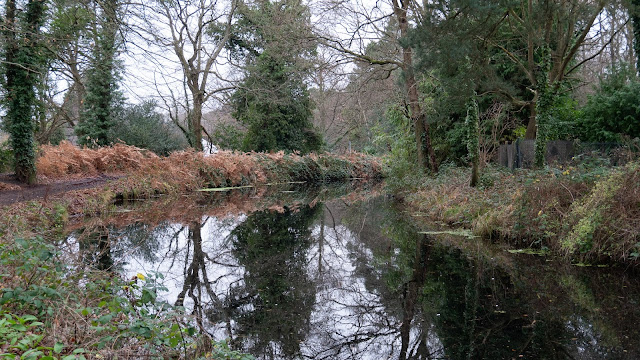 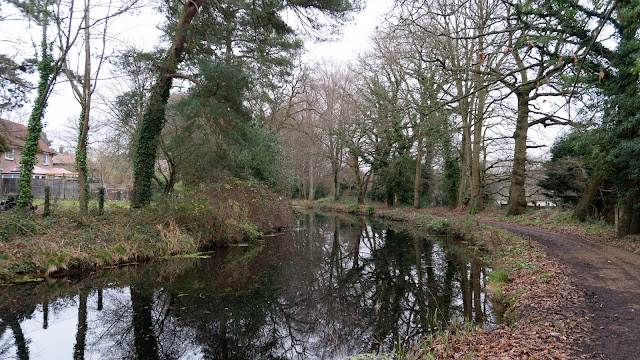 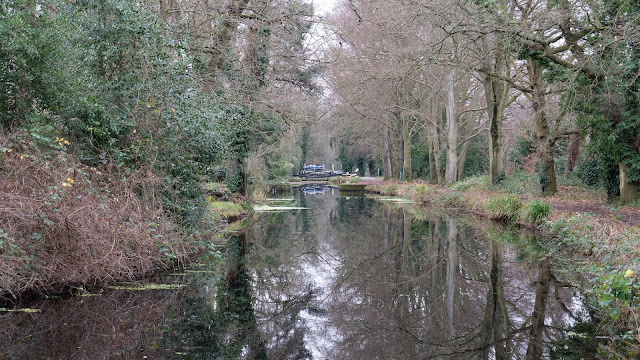 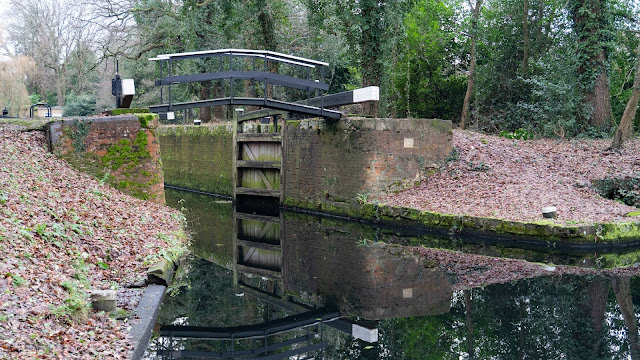 Having cleared my head, and tracked down a further fix of coffee - I headed to the motorways.  I'm sure it has taken longer to get from Surrey to Oxford, but at this point I just can't quite remember when.

Note to future self: 27th December is not a good day for travelling!
No comments:

Today (23rd December 2019) is a bit of a personal photographic landmark.

My first digital camera was something I helped build in the mid-1980s - it involved an analogue TV camera, a monstrously expensive digitising framestore and a computer (a BBC Micro).  The 'camera' was good for capturing electron diffraction patterns, but not really much good for anything else - and the images were 512 x 512 pixels.  You also needed a pretty robust trolley to move it around and mains electricity. There's an entire PhD thesis somewhere at the University of Bristol if you want to know more.

My second digital camera was about 20 years later, in November 2004 - when I finally bought a compact (and portable) digital camera.  Although the images weren't, with hindsight, that much bigger than the 1980s ones they were at least in colour.  I was also, in a rather nerdish way, intrigued by the extra information that came attached to each image such as date and time alongside the image information such as exposure time and aperture setting.  This metadata lured me into being rather more interested in thinking about the pictures I was taking - and generally into becoming a better photographer.

The first step in this was to be one year project to try and find (and take) a digital image every day.  And the rest, as they say, is terabytes.

The original plan was to take a picture everyday during 2005, but I started early - on 24th December 2004, looking out of my office window at the Open University in Milton Keynes.


Somehow, I just haven't yet managed to stop.

Today marks the completion of 15 years taking at least one digital photograph each day.  During the first year, I posted pictures here, then for a few years they mostly just stayed on various computer hard discs, and since July 2010 the images have been posted on Blipfoto usually with a short diary entry saying something about the picture.

I might well be a rubbish diarist (in the traditional sense), but I think I'm getting the hang of the photo-blogging malarkey.

And, yes. I do still worry about happens if I get round to crossing the International Date Line.

A rather strange Friday.

In some ways just a normal 'not-working' Friday, in other ways it felt like it ought to be the start of the long Christmas break (it isn't, I'm back at my desk on Monday morning).

The plan for the morning was to explore some of more remote parts of the Lye Valley - despite the rain, which switched between heavy and torrential.  The usual walk along the valley boardwalk was peaceful albeit wet, and it was good to see the work by the reserve volunteers, particularly in adding barriers to control the water flow.  The reserve is particularly vulnerable to heavy rain and the local building development has made the 'flash floods' worse - I'm inclined to suggest that a family of beavers might have been recruited to help with the work, but I suspect there are rules about this sort of thing.

Walking from the House

Over recent months I've found myself reflecting on the value of having the option of a decent walk that one can do without needing to have a 'car commute' added in too.

In Shetland, I regularly head off onto Quendale beach - simply because it's my local 'no-car' walk. Sometimes that walk does just turn out to be a there-and-back walk along the beach.  At other times it'll stretch to either the Garth's Ness walk - or even the Fitful Head loop which gives splendid views along the west coast of Shetland.

If I want further variety (on foot from the house), I can also opt to head towards the Pool of Virkie, Grutness Voe and the east coast of Shetland which isn't much further away.  Shetland might be best part of 80 miles from top to bottom - but it's very narrow.  I've seen it suggested that nowhere in Shetland is more than three miles from the sea - I've always been a bit skeptical about that number, I'm pretty sure it's not that far.


In Oxford, there isn't any (obvious) walk from the house that involves sea cliffs, beaches or whales, there are however quite a few that involve nature reserves and woodlands.  My regular walks locally involve the BBOWT C S Lewis nature reserve and on into Shotover Country Park, or down the local streets to the lovely Lye Valley.

Headington also has lots of lanes which give the option of time away from traffic - I often wind up sharing pictures from the lanes or from Mesopotamia on the way into Oxford (and although this post was about no car walks, on that walk there's always the option of getting a bus home).

Friday the 13th. What could possibly go wrong?

At past elections I've often stayed up late to see the drama unfold, or at least kept a radio playing at the bedside to hear the story play out.  This time the exit poll was so overwhelmingly depressing that it didn't seem worth the missed nights sleep.

So rather unusually, for a post-election day, I was just pissed off rather than sleep deprived.

An early morning visit to a local Sainbury's started the day.  I was tempted to shout at anyone who looked remotely happy (and particularly the person on the check-out who asked me cheerfully "how my week was going?").  It's kind of hard not to judge people based on how you think they might have voted, which is (I guess) a bit unfair - even if I have been doing it on a daily basis since the referendum in 2016.

Having endured the retail crowds I headed for the solitude offered by Harcourt Arboretum - this is part of the University of Oxford, and linked with the Botanic Garden in the middle of Oxford. There isn't much going on at the arboretum at this time of year - even the pigs hadn't bothered getting up, and I was, for most of the time I was there, the only visitor.

There is a sense of the trees settling down for winter - the leaves have dropped, the surrounding bracken is dying back - and when the snow comes, the woods are ready.

Today, there was no sign of snow just some watery sunshine casting shadows between the tree trunks.

A calming place after a tumultuous night and a busy start to the morning.

One of the paybacks of a long weekend on Shetland is the extent of the "To Do" list the following Friday.  I'm certainly not going to start grumbling about it, but it does rather shape the day.

The day, this time, included several shopping malls - and even (may I be forgiven) a garden centre. I may have already reached my CCQ (Christmas Carol Quota) for the season.

I did however manage to combine these retail experiences (apparently, one does not simply 'shop' anymore) with a slow peaceful wander through Mesopotamia.  Still plenty of water coming down the river - but at least the water levels have dropped far enough to make the path passable.

Everytime I pitch up on Shetland, I watch the skies hopeful that I'm going to get stuck there.  The closest so far, was only getting as far as Aberdeen before Flybe decided that they weren't going to go any further that day.

And, I'm afraid I need to report that both northward and return journeys again went smoothly this time, even if the weather did immediately close in for the rest of the week.

Having checked the forecast I'd gone North in the full expectation what much of the time was likely to be spent inside or possibly wrapped in so many layers of clothing that wandering along the beach would be challenging in any conditions.

However I was able to spend most of the 6 or so daylight hours on offer outside each day.

I've enthused in the past about the wonderful low sunlight during a Shetland winter and when you combine this with gentle (or no) winds you're definitely onto a winner photographically.  The only thing the pictures don't reveal is the temperature - there were still traces of snow in a few places when I arrived, and for most of the weekend, it felt fine as long as you kept moving.  Sitting around waiting for the light wasn't always fun!

One real bonus of the calm weather was the return of the Sumburgh guillemots - it's always a delight to both see and hear them, when they are back.  It might not be breeding season just yet - but their reappearance is a reminder that it won't be long until the solstice, and the days will start to get longer again.