Going to the Edge of the World

The Outer Hebrides are the islands that protect western Scotland from the North Atlantic.  Barra, the Uists, Benbecula, Harris and Lewis form an almost continuous line of islands separated by the Minch from mainland Scotland. If you look even further out into the North Atlantic (another 40 miles or so beyond the Outer Hebrides), you will see another isolated little group of islands. This is St Kilda.

These islands were occupied by generations of subsistence crofters until 1930, when the falling population finally left the crofters with no option other than to petition to be relocated to the Scottish mainland.

The islands are now owned by the National Trust for Scotland.  A number of companies run boat trips to the islands, at least when the weather co-operates. I choose to travel to St Kilda with Kilda Cruises who aim to run boats from Harris three times a week.  My previous attempt to get to St Kilda several years ago got weathered off, so this time I based myself on Harris for several days to try and ensure that I had as good as chance as possible to get to the islands.

As I might have predicted, the first attempt to get to St Kilda (on this visit) got weathered off, with instructions to be at the pier at Leverburgh at 07:45 the following morning, when the weather was expected to be a bit better.

I’ll gloss over the details of the boat trip out – suffice to say that the trip felt much longer than three hours (and I always used to say I was a good sailor).  Once ashore I and my fellow day trippers got to spend about 5 hours wandering pretty much anywhere we wanted on the island of Hirta, the main island in the group.  The most recognisable images of St Kilda are either of Village Bay (on south-east side of Hirta) or of The Street, a string of 19th Century cottages. Many of the cottages have fallen victim to years of weather but six have been restored by the NTS to provide accommodation for researchers and volunteers visiting the islands and to house a museum telling the story of St Kilda.  The other feature of 21st Century St Kilda is the little military base at the northern end of Village Bay. This provides a home for staff supporting the various radar installations on the island.  On my first day on Hirta I opted to spend time around the Street (trying to take pictures without Goretex-clad visitors) and then climbed up to The Gap on the eastern edge of the island to see Boreray and its sea stacks about four miles away.

Once we’d been summoned back to the boat, we went out for a closer look at the sea stacks, and the vast gannet colonies on them before heading back towards Harris.

In an ideal world I’d have had a chance to work through the first batch of photographs before a return trip to take more, but North Atlantic weather doesn't often offer ‘ideal’ conditions. So, at 07:45 the next morning I presented myself at the pier again for another St Kilda fix. "I can't remember anyone going twice in a week" was my welcome.

The seas were a bit different for the second day, and I travelled on Kilda Cruises single-hull boat rather than the catamaran I’d used for the first trip.  The second trip was a little bit quicker, felt much like a high-adrenalin fairground ride that the first one had and I was a much happier sailor.  My main target on day two was to climb to the various radar installations on the island and to have a look at the islands of Soay and Dun.

The St Kilda story grabbed my imagination many years ago, and I'm really pleased to have finally been able to see the island myself.  As I was bumping back cross the water at the end of the second day, I was reflecting on the difference that decent communications might have made to the islanders.

In the 1920s postal services were unreliable at best, supply boats regularly didn't get through and any medical services were a complete lottery.  After 25 years of being abandoned, the UK’s need for a missile testing range during the Cold War lead to St Kilda being re-established as a military base in the mid-1950s, from that point on supply boats have been regular enough to support 10-12 service people during the winter, and upwards of 30 during the summer months, and there is even a regular helicopter service between St Kilda and Benbecula. It's not easy to see how the St Kildans would have been supported through the Second World War, but it does seem sad that the long term heritage of the island has been lost. It was particularly touching to walk round the little graveyard on the island and to see from the recent headstones that at least some of the evacuated St Kildans do eventually get to make it back to the island.

The Edge of the World label is from the 1937 Michael Powell film that tells the story of the evacuation of St Kilda - it's worth tracking down.

North by Northwest and 500 Miles.

North by Northwest doesn’t make sense on a compass (and in truth it didn't really make much sense in the film plot either), and it’s just over 500 miles (I'm only planning on walking very limited parts of it) but my next trip is to a remote UK location about 500 miles northwest of Oxford.

I regularly head due north from Oxford for about 500 miles to get to get Shetland, this time I'm going the same distance but heading rather further west to the island of Hirta, more commonly just known as St Kilda.

There are half-a-dozen islands in the St Kilda group, but the only one that was ever regularly inhabited was Hirta.

Hirta was probably continuously occupied for about 5000 years until the summer of 1930 when the remaining residents finally conceded that they weren't going to be able to stay and petitioned to be evacuated. Since then the island has come into the ownership of the National Trust for Scotland, and since 1957 there has also been a military presence on the island. There is a certain irony in the fact that the island was evacuated in 1930 because it wasn't considered practical to establish regular communications to the island, but only a few years later a well-supported base was created on the island (presumably from a different budget!)

St Kilda has been on my visit list for a long time. My last (somewhat) half-hearted attempt to get there was in summer 2006.  I was spending a bit of time in the Outer Hebrides, but on the days I was able to go all the tourist boats to St Kilda were either fully booked or weathered off.  This time St Kilda is the focus of the trip, and I've got several days booked to try and get there.  I've opted to go with Kilda Cruises from Leverburgh at the southern end of Harris in the Outer Hebrides and I’ll be getting there via Skye (and CalMac Ferries).  It’s a long time since I visited Skye, so long ago that I needed to get a ferry there rather than being able to use the bridge!

So what's the attraction. The island is unique in the UK in having UNESCO dual heritage status - for both natural and culture significance. It's also remote and at least a bit difficult to get too - both factor getting points on my list. And I don't know very many people who've been there.

Hopefully Hurricane Bertha won’t be doing an encore in the UK next week, but I do know from spending lots of time on Shetland that Scottish island weather is an unpredictable at any time of year - particularly on isolated little islands surrounded by ocean - so I won't be crossing St Kilda off the list until I've actually set boot on ground.
No comments:

A date for your diary.

I'm going to be talking about, and showing, pictures from the far North and the far South.  If you want to hear about snow, ice and the northern lights, or puffins, penguins and polar bears do come and join me.

And there will be an opportunity to buy prints, cards and calendars.

The acquisition of a new tent provoked me into digging out images of old tents - and it also turned out be an automative history lesson too. 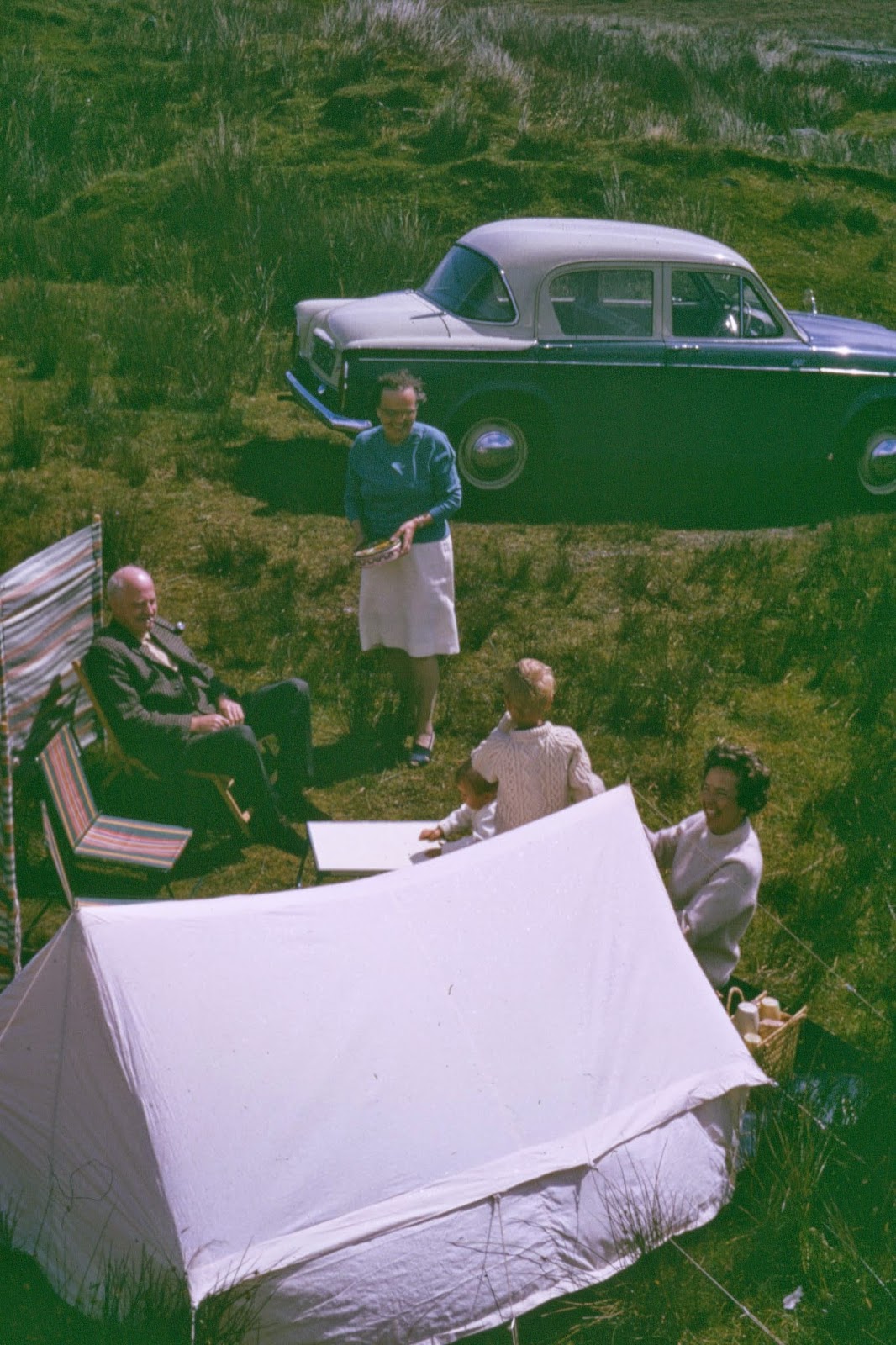 I'm claiming this as first tent - and I did spend a few nights sleeping in it mostly in the back garden or alongside my parents caravan.

Wouldn't claim it was very weather-proof - single layer of thin canvas, no ground sheet and wooden poles.  Was more often pressed into service for summer picnics - this particular picnic was somewhere in the Sperrin Mountains in Northern Ireland.

In case you're wondering, I'm the little chap in the Aran sweater with back to camera.

Spending too much time in the mountains as a student meant needing to find a little back-pack-ready tent.  I had (I think) a Pheonix Phantom - it's the brown tent on the right of the image. Storm proof synthetic fabric, proper inner tent, aluminium tube A-frame.

And in the background - somewhere in North Wales, I believe - an array of Ford Fiesta, Ford Capri, Morris Traveller and a Mini. I think I'd arrived in the Fiesta.

[UPDATE] And in breaking news - my brother has just confessed to still having the Phantom - hidden in the cupboard under his stairs.

Another generation of tent technology - and I've probably missed a few innovation cycles over the years too. The wee brown one was pretty weather proof, lets see how the new one (a Vango Tempest 300) does. Properly separated inner, curved tensioned poles, wind-proof inner tensioning.   It gets it's first outing in a couple of weeks. 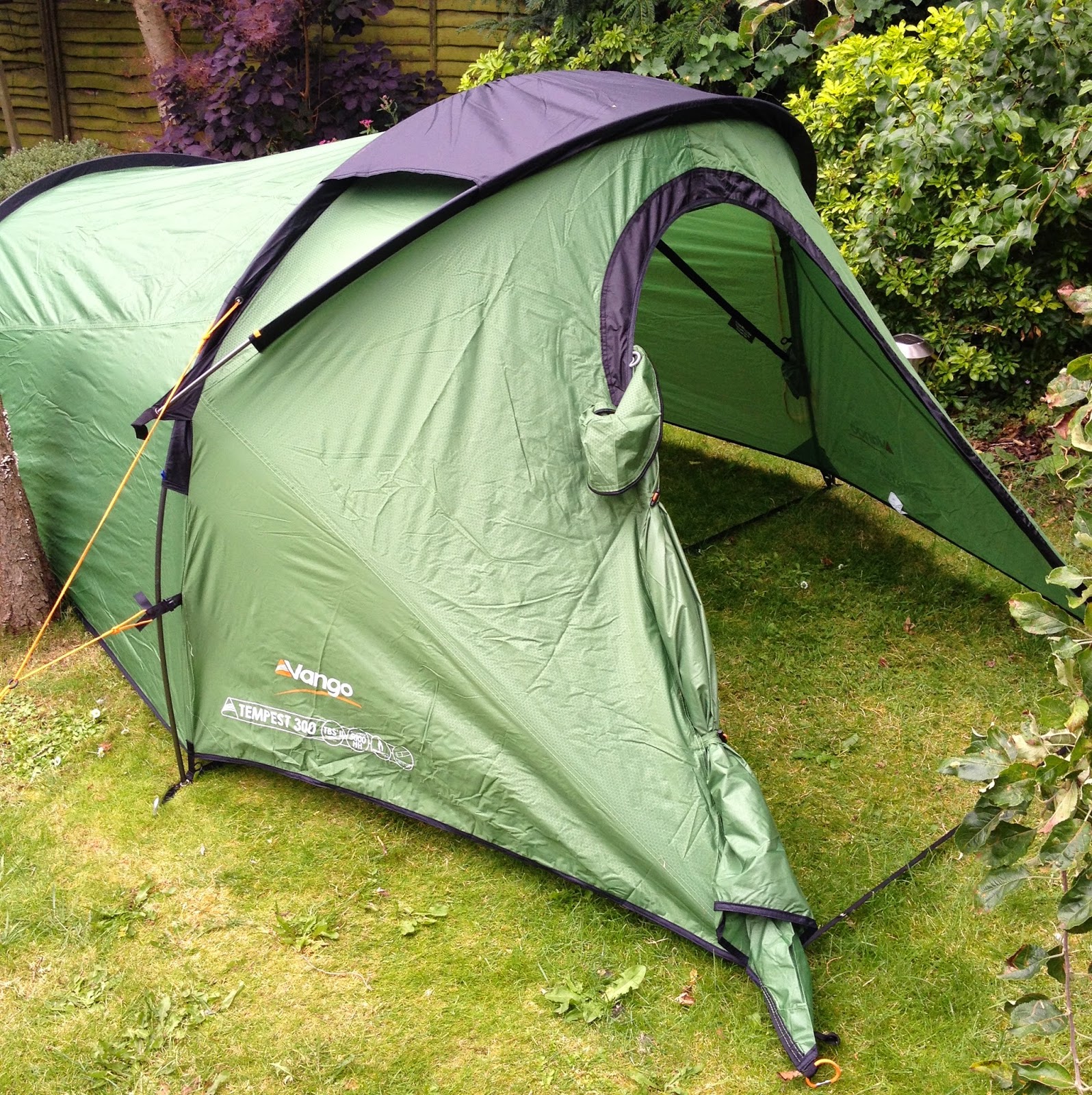