Over the last few years I’ve been on Shetland in every month of the year, with the exception of April.  This year I’ve had the chance to remedy this.

In most parts of the country April is a time of changeable weather and Shetland is no exception, indeed it could be justifiably said that April on Shetland is no different, in terms of changeability of weather, to any other month here.  Over the last few days I’ve seen hail, rain, gale force winds, and bright sunshine, in temperatures from below freezing through to ‘shirt-sleeves’ warm.

April on Shetland marks the transition from winter to summer – this is seen through the light, the boats in the harbours and most of the all the bird life.

Light.  Once we get past the spring equinox, the days are longer further north than they are down south.  Already (by 21st April), we’ve got to dawn at 5:30 and sunset at 20:40, but it feels like there is more light than this.  It’s already bright daylight like when I first wake in the morning – it’s hard to turn over and go back to sleep when the light is streaming in.  There is still light in the skies to the west at 22:00.  It’s only just got to “Simmer Dim” (the four month long Shetland summer season), but it already feels later in the year than it is.

Boats.  April marks the start of the summer ‘cruise ship’ season.  This was kicked off by the arrival in Lerwick this week of the sail training ship the “Statsraad Lehmkuhl” from Bergen.  There are scheduled to be over 40 cruise ships turning up in Shetland over the next four months.   Many will be much larger than the Statsraad Lehmkuhl, and most will have many more passengers, but few will be more evocative.  There is something timeless about coming down onto the Esplanade in Lerwick and seeing (and hearing) a tall ship tied up on Victoria Pier.  It’s a long time since this was a routine sight in Lerwick, but the masts between the old buildings seem to give a brief glimpse into the past.  Elsewhere, and in other days, in the harbour are the more normal working boats that reflect 21st Century life on Shetland.
Birds.  Just as I arrived on Shetland in early April, so did the puffins.  During April the cliffs, hillsides and skies of Shetland are filled with returning bird life. Every field seems to have a crowd of oystercatchers in it.  Every cliff is covered by fulmars. Or perhaps I should be using the Shetland names.  Every field seems to have a crowd of shalders, and every cliff a covering of maalies.  This being the 21st Century, my twitter stream is also littered with announcements that the summer visitors are returning.  The puffins (tammie nories) get most attention, even getting either own webcams.  Elsewhere the returning swallows (who don’t seem to have acquired a local Shetland name) and arctic terns (tirricks) are starting to appear, along with the great skuas (bonxies) and red-throated divers (raingeese).  As I’ve explored the cliffs, headlands, harbours and lochs at the southern end of Shetland, I’ve also seen (in their breeding finery), swaabies, scarfs, dunters, lungwies, tysties, solan, staneshakkers and rippack maas amongst others. (For reference these would be, in order, greater black-backed gulls, shags, eider, guillemots, black guillemots, gannets, wheatears and kittiwakes).


April is the time when everything kicks off for the summer season on Shetland. On good days the clouds will just bubble away leaving the cliffs clear. And if on the other days the weather looks bleak, just wait a couple of hours. The weather is sure to change.  And the final sign that it really must be spring on Shetland - the fence gets a fresh coat of paint. 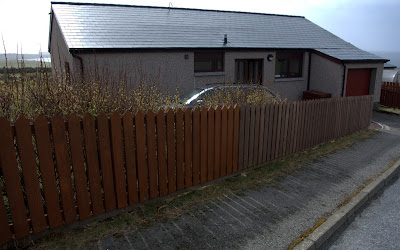 And there is also a Flickr set with some of these, and some other images taken this month around the southern end of Shetland.