The sun shone, the daffodils were out, the birds were starting to reappear on the cliffs and the wind didn't blow (too much).

I was really pleased to see the birds back on the cliffs at Sumburgh Head - fulmar, guillemot, razorbill and shag much in evidence and even one or two puffins putting in an early season appearance.  And I can't remember ever seeing so many oystercatchers - in one field near Bigton I counted over 60 oystercatchers farming the field to the slight consternation of the six sheep who thought it was theirs.

One unexpected sight was the Smyril Line ferry Norrona passing close to Sumburgh Head on the Sunday afternoon. At one time the Norrona used to call into Lerwick regularly giving Shetland ferry routes to a Denmark, Norway, Iceland and the Faroe Islands  - this service got caught up in a variety of legal and logistical knots resulting in the ferry now by-passing Shetland most of the time, and leaving Shetland with ferry links only to Aberdeen.  I'd be very pleased to see this service reappear.

Room with a View

I'm sitting typing this looking out of the ofﬁce window in Shetland. It's a beautiful sunny morning in late March - and the only domestic sound I can hear is the kitchen clock ticking in the background.  If I push the window open I can hear the waves in the voe just below the house, and the herring gulls and fulmar crying as they swoop down over the waves.  In the distance I can see Sumburgh Head and directly in the foreground the Scatness peninsula reaching down to Horse Island.  A little further to the right is Lady's Holm and behind it on the horizon the outline of Fair Isle. After dark last night I could see the three ﬂashes of the Sumburgh Light and on the horizon the two ﬂashes of the Fair Isle North Light.

This week the waves in Quendale Bay have been very gentle, a real contrast to the energy we saw on the last visit. The big winter storms were a reminder that just along the coast was the site of the Braer disaster in January 1993, even my ill-educated eye can see how much of the beach at Quendale was moved around last winter.

We ﬁrst looked at the house 10 months ago, and ﬁnally bought it last summer.   At that time it was a freshly refurbished empty house and when we stayed there it felt a bit like a very lightly furnished rental cottage not unlike the ones we'd stayed in on previous visits.  Over the last eight months we've gradually ﬁlled up the house with our stuff - big furniture bought locally in Lerwick, smaller stuff  brought up from the south of England in several car loads, and pictures unearthed from various cupboards down south have ﬁnally been hung around the house.  It now feels like a northern home rather than just somewhere to visit.

My original plan had been to spend a lot of the summer up here watching birds and waves, and taking photographs as the days lengthened into Simmer Dim, and then gradually retreated into long autumn and winter evenings.  I'm actually only going to be able to spend a few weeks here over the summer but I will be based in Shetland over the dark months next winter and with the exception of a few trips to the southern hemisphere to see some sunlight and to take some pictures on some other remote islands,  I'll really be calling Shetland home.

One of the things I've always wanted to have in front of me is a sea view - this house has it in plenty.  However I must admit I'd never given serious thought to the fact that the view might be a problem. My Oxford view is a relatively unchanging (or at least slow changing) street or garden view.  My Shetland view is the constantly changing sea - each bird cry or crashing wave brings the possibility of something different happening, and even if there isn't anything dramatic the ebb and ﬂow of the tide ensures that even minute to minute things do change.  It all makes it far too easy to look up from the keyboard, and then glance back and ﬁnd that 20 minutes have somehow disappeared. Maybe in the winter it'll be easier to concentrate on the computer screen - although the hypnotic lights from Sumburgh Head might still be a problem.
No comments:

I blame the folks at Wanderlust Magazine – they sent a reminder that they’re asking for ten top travel experiences.  This is ten I put together at lunchtime today.  I’d probably pick a different set on other days.  I can see two themes – one involves getting up early, the other involves wildlife – which probably explains why the first one is the first one….

Penguins at Dawn.   Having gentoo penguins pecking my boots on the beach at dawn on Sea Lion Island while I tried to photograph them is a wonderful experience.  Wide angle wildlife photography doesn’t get any better. (Falkland Islands, 2009)

Polar bears dining.  Sitting in a Zodiac watching polar bears feeding on a whale skeleton – there were other people there but I was too absorbed watching to notice them. (Svalbard, 2010)
Lunch en route.   Sharing lunch with a local family on a steam train from Coonoor to Ooty.  The train was delayed – and the family travelling on the train with us produced leaves to use as plates and rice with serious pickles and insisted we share.  Now referred to as a ‘Palin’ moment – if it has been included in one of his travel programmes you would have assumed that it had been staged. (India, 1994)

Seeing forever.  Having read about how clear the Arctic air was it was amazing to arrive in Kulusuk and really see what this meant in terms of how far you could see. (Greenland, 2007)

Early Start.  Seeing the El Tatio Geysers at dawn – required a very early start from San Pedro de Atacama and many hours being driven along unlit and in places very rough roads over high passes but arriving at El Tatio as the sun just started to strike the geysers was more than worth it. (Chile, 2007)

Tiger's Nest. First close-up sight of the Tiger's Nest (Taktshang Goemba) – it’s first revealed through the trees in the distance high above you and occasionally re-appears as you climb up the track, then after a long haul when it’s completely invisible you suddenly reach a turn on the path and the Monastery is visible bathed (if you are lucky) in bright sunshine. (Bhutan, 2008)
Tiger. After several days seeing fresh pug marks along the tracks finally seeing a tiger in the wild for the first time at Nagarhole NP. (India, 1994)

Nesting Albatross.  Sitting on the edge of a black-browed albatross colony on Saunders Island. (Falkland Islands, 2009) 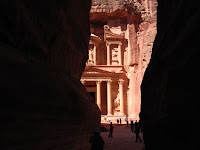 The Treasury.  First sight of the treasury in Petra after walking through the Siq first thing in the morning with no-one else around. (Jordan, 2006)

Getting in touch with your inner Viking.  Seeing Up HellyAa - everyone should do it at least once. (Shetland, 2007)
No comments:

Back to the Candy Store

My annual visit to the candy store that is the Destinations Travel Show – wasn’t able to make the London version this year (too busy travelling) so it was up the M40 to the NEC this time.
Felt like a smaller scale event than the London show last year – or the Birmingham version I went to a couple of years ago – and it felt like there were more ‘lifestyle’ stands (No, I’m not interested in a massage, a new bed(!) or a static caravan – this is a travel show), but at least I didn’t have a fight with anyone from nPower this year.
My aim this year was looking for inspiration for travelling in the first few months of 2012 – and particularly contemplating slower travel rather than just jumping on a plane, doing some tourist stuff and then heading back to Heathrow.
I’m not going to manage a top ten this year, but the ideas I came away from the show contemplating were:
I resisted the temptation to book anything at the show – but the dining room table is now covered with a big pile of brochures. Difficult business this trip planning malarkey. 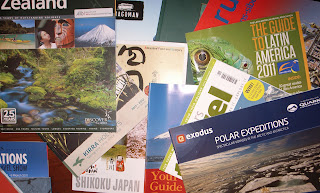