A Transition Day.  After another fantastic week in Pertisau, today was moving day.

But we didn’t move very far.  In a  desperate attempt to avoid re-engaging with day to day life in Oxford, we decided to add an extra few days to the trip and spend a bit of time exploring Innsbruck.  Last Friday we drove through the outskirts of the city - today we got dropped off at a city centre hotel.

Pertisau was in deep blizzard when we left - in contrast Innsbruck was in bright sunshine.

And as is traditional when visiting a new city our first targets were places where we could look down on the rest of the city.

First stop was the Stadtturn (City Tower) in the middle of the old city - 140-odd steps up a double-spiral staircase.

Second stop was the wonderfully futuristic funicular railway which climbs 300 metres from the city centre (via tunnels and a bridge over the River Inn before) climbing up to Hungerburg.

Next step will be to explore more of the old city… and to thoroughly test the coffee and cake shops of Innsbruck.

A travelling Friday.  Several years ago we spent an idyllic May week on the edge of the Achensee in the Tirol.


And somehow, it’s taken nearly four years to get our act together.  But, today we got up early and headed to Heathrow and got a direct flight to Innsbruck, and an hour after landing we were having lunch at our hotel in Pertisau not far from the shores of the Achensee.


If anyone is looking for me. I’ll be on the piste.

After an ‘active’ Friday (Thames Path) and a ‘retail’ Friday (Cameras), today was probably best catalogued as a ‘lazy’ Friday.

As is often the case my ‘lazy’ Fridays usually end up with time in a coffee shop spent either drafting blog posts or figuring out future travel plans - in this case either on foot (in the UK) or by rail (elsewhere in Europe).

The prelude to coffee was a walk through Mesopotamia (the Oxford version) - this currently has some novelty value, as the walk has only just reopened after being shut for most of the year.  I’ve lost track of which storm did the damage, but it is clear that a lot of river bank has been weakened - and the concrete pathway has suffered.  There is fencing in place now, but it certainly has a sense of temporary-ness about it.  There is also lots of tree damage - no doubt some from Storm Ciara last weekend, and likely more to come from Storm Dennis this weekend - although at the current rate I’m also expecting Ellen and Francis to hove into view shortly.

And after a spot of coffee shop skulking, the latter part of the day was a slow walk back to Headington via Christ Church Meadow and the river bank - water levels were high but not yet overtopped (pretty sure that’ll have changed by the end of the weekend).

Next week; a 'travelling' Friday.

One of my weaknesses is a tendency to hang onto stuff, just in case it might come in useful.

I've been particularly guilty of this with old camera kit (and the boxes!) - until this week I've had quite a substantial hoard of camera kit that I'm no longer making real use of.  But not now.

I've been, over the last year, experimenting with Sony cameras and lenses as an alternative to the Nikon kit I've been using since 1999.  I've now finally traded in my Nikon collection to help fund the new Sony collection. 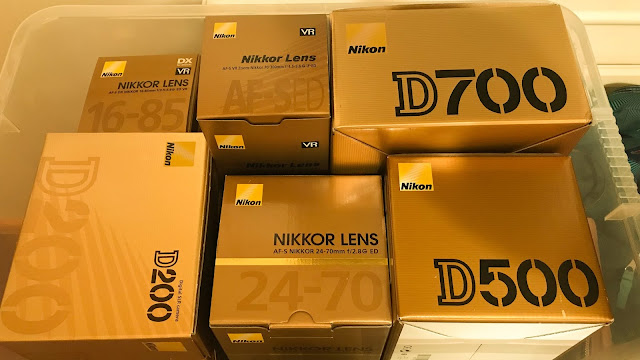 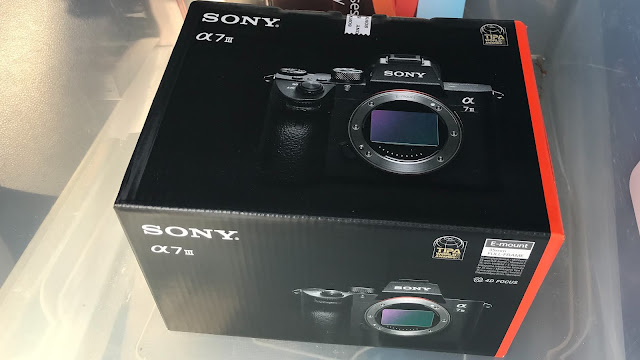 This trade-in has triggered a wee bit of photographic nostalgia.

There were three cameras in the collection I traded in.

A D200 (bought in 2007, 60K pictures) the stamps in its passport would include the Antarctic, Bhutan, Falkland Islands, Norway, the US, Sri Lanka and Norway.  A D700 (acquired in 2010, 78K pictures) saw action in the Falkland Islands, Scandinavia, Greenland, along the Northwest Passage, Sri Lanka and of course Shetland).  And the youngster in the collection, a D500 (which joined in 2017, only 38K pictures) has seen a lot of time on Shetland in addition to travels to the Arctic.

And since my current camera dealer of choice is down near Gatwick, it made absolute sense to turn a camera buying trip into lunch and a wander on the beach in Brighton. 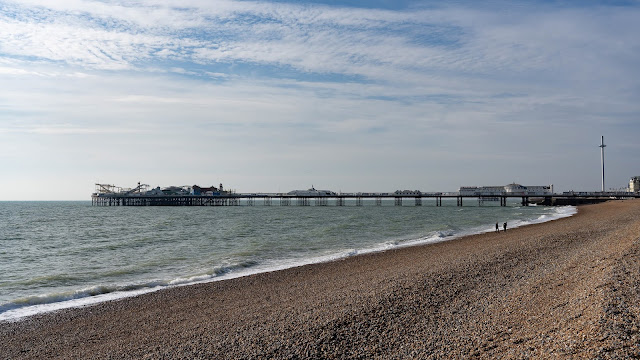 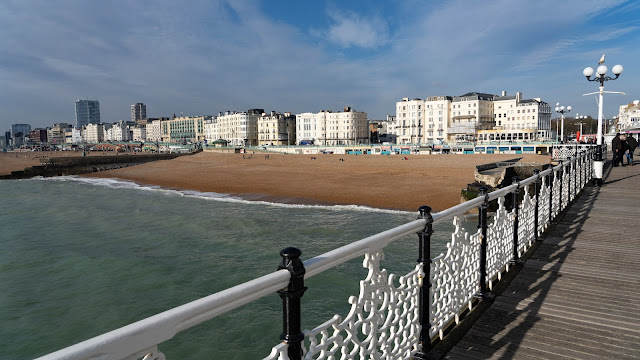 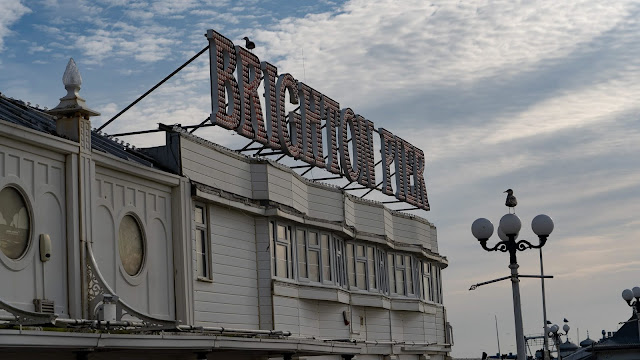 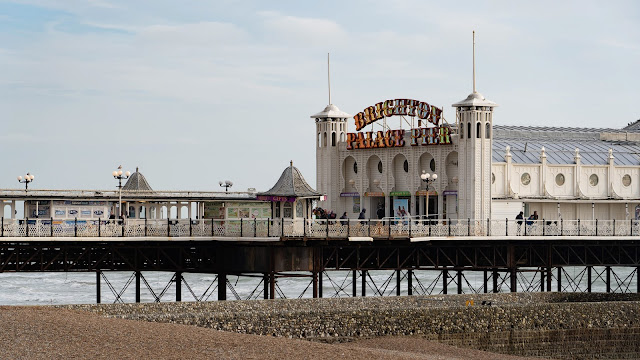 Lovely weather for it too.

Thames Path: Marlow to the Tideway

Have covered the 'middle' 90 miles of the Thames Path a couple of years ago, I felt it was high time I topped and tailed it.  Having done the middle bits as a series of day walks, it made more sense to tackle the remainder as a series (three!) of multi-day walks.

The first of these three walks covered the roughly 40 miles from Marlow Lock down to Teddington Lock (where the Thames becomes tidal).  There is just one more lock downstream of Teddington, at Richmond - but I must confess that I don't understand how a lock works without blocking the tide - maybe I'll figure that out on the next bit of the walk.

The character of the river down here is very different to the river further upstream - the river is much wider for a start, and the banks are very different. Upstream there is lots of farmland, downstream there is a mix of parkland and buildings.  The banks are often lined with expensive houses with their own moorings and big boats - or with boat houses that probably also contain expensive boats. In other places the bank is filled with houseboats.  One of the other features down here - it that the river is big enough to have it's own islands, often with both houses and 'keep out' signs.  The locals are clearly very possessive of their bits of river bank - with signs ranging from the passive aggressive to the plain aggressive, from the low tech "Beware of the Dog" or even "Beware of the Dogs" to the high tech "Grounds protected by CCTV and Laser Monitoring".

The Thames Path also has to negotiate the local land ownership complications - there's a lot of "Crown Estate" to be avoided - over my three days walking I has to cross the river nine times (8 times by bridge, and once by boat), but at least the waymarking is good.

The walk split into three tidy (equal length!) chunks - the first day ending at Windsor, and the second ending at Chertsey, in both cases with a convenient pub or hotel (The George in Eton, and The Bridge in Chertsey.


Picking up from March 2018 - the river seems to be much more meandering than I'd remembered - my phone kept insisting that I wasn't far from my destination - but the signposts kept insisting that I still had a long way to go along the river bank. There is only one stretch, on this bit of the river, when the path gets diverted 'inland' through Cookham rather than being able to follow the river directly.


I was both relieved and thirsty by the time that Windsor Castle appeared in the distance as I walked across The Borcas (on the Eton side of the river).

The biggest surprise of Day 2 was the weather - cloudless blue skies hadn't been factored into the plan, so I was carrying waterproof and but not sunscreen!

The big question of Day 3 - after the question about whether I wanted a full cooked breakfast - was would the little Weybridge-Shepperton ferry across the river be running early on a Sunday morning to save me from the long (and not v scenic trudge to rejoin the main Thames Path at Walton-on-Thames).  For the record, the answer to both questions was yes.  I don't think I've ever knowingly turned down a boat trip - or a cooked breakfast, probably.


Marlow to Teddington (60km) is a decent three day meander, and it leaves plenty of time for stopping and taking pictures.

Next time: down the Tideway, through the centre of London, towards the sea and more specifically the Thames Barrier.

Do Photographers Dream of Electric Cars?

I'd really like to replace it with an electric car, not one of those hybrid things, a proper new-fangled just "plug it in and it goes" electric car.

But here's the other thing.  I don't do very much heavy mileage these days, but I do drive up to the Scottish mountains from Oxford every now and again - and the 500 mile run between Oxford and Aberdeen (for the Shetland boat) is likely to continue to feature for a while yet.  At the moment I can drive from Oxford to Aberdeen or vice versa on one tank of diesel - how much more complicated is my life going to be if I need to find a charging point half way (or worse at each third). I've got enough going on without adding range anxiety to the collection of ailments!

I've been looking at the options. There are cars with similar carrying capacity to my little SUV (it rarely has more than two people - but those two people often have a lot of stuff).  There are cars that have four-wheel drive, and having had that for a while it does give an extra level of control/confidence when the weather is less than ideal.  There are cars that can at least get me from Oxford to the Scottish border (always an important landmark) on one charge - but are there going to be any plugs to use there when my fuel gauge gets to 'E' or 0%?

And here's the last thing.

I know I'm probably going to save on fuel costs. I know I'm going to be doing a bit less damage to the planet.  But still, you don't get much electric car for £18K - even factoring in a bit of inflation (and the fact that the pound has tanked against pretty much everything) you very quickly get into double that and way more too.  Affordable isn't the word that comes to mind.

Not sure where that leaves me.  Do I wait another couple of years hoping that the options will get wider (probably), that the range will get better (probably) or that the price will fall (probably not)?

It took me while to bite the digital bullet with my photography - I put off buying a digital camera until the costs dropped (which meant I missed out on buying one of the overpriced low-resolution versions that started the rush).

Will the same happen with cars - the prices will drop, with the range (like the resolution of the camera) getting forever better.  Not sure the analogy really works - I never felt guilty using an extra roll of Ektachrome, not like the extra tank of diesel.
No comments: