This should have been a weekend of at least mild panic.  The Headington bit of Oxfordshire Artweeks starts next Saturday (20th May) and in each of the last three years I would have been running around getting pictures framed and hung and trying to get the house into a state where visitors could be invited in.

But not this year.

This year I’ll be running away to sea.

This weekend I’m getting my wet weather, cold weather and photography gear ready to do a trip I’ve wanted to do for a while.  Next weekend I’ll be heading up to Aberdeen and then getting a boat to the Shetland Islands.

“So what?” I hear you cry.  “You’ve gone up to Aberdeen and got a boat to Shetland more times than I can remember”.

This trip is a bit different.

Instead of getting onto one of the Northlink boats in Aberdeen, I’ll be joining the MV Ortelius run by Oceanwide Expeditions and heading to Fair Isle, about 25 miles from my house at the southern end of the Shetland Mainland.  From there the boat will turn north, crossing the Arctic Circle until we make landfall on the remote island of Jan Mayen at almost 71N.  This little island is home to an isolated Norwegian weather station and Beerenberg, a 7,500 ft high active volcano.

After a little bit of time on Jan Mayen, when hopefully we’ll have seen the top of the volcano (although statistically this is extremely unlikely) it’s north across the Greenland Sea and into the high Arctic.

Next stop is Spitsbergen (79 North).

So why has this trip been on my must-do trip for a while?

It should let me see a variety of whales (including orca, fin, bowhead and minke) as well as polar bears, seals, walrus and arctic fox.  It should let me add another seriously remote location to my island list (and spend a few hours on Fair Isle too).  It gets me back to Svalbard, complete (at this time of year) with 24-hour daylight.

Perhaps most importantly it will let me experience the gradual transition from the (relatively) mild maritime conditions around the Scottish coast at 57 North to the full arctic conditions at 79 North. I’m interested to see how the weather changes, and when during the voyage we first encounter ice.

The last time I went to Svalbard I jumped from London via Oslo to Longyearbyen enclosed in an ‘airline bubble’ so the transition was a step change rather than the slow change I hope to see this time.

It would be lovely to be able to come back south by boat too, but unfortunately that would involve staying around Svalbard until the autumn when the tourist boats come back south again so my return journey will be in the airline bubble.

Over the years I've had some pretty dubious waterproof garments for wandering up mountains.

Some of these really weren't waterproof at all.

Some of these were very waterproof.  They mostly didn’t let the rain in, but they also ensured that they didn’t let water (aka sweat) out, so in anything warmer than near-arctic conditions you were pretty much sure of getting wet.  Incidentally, one bonus was that it was possible to put a pint of beer into each of the two big pockets of one of those coats and it would stay there until it was drunk or until the wearer fell over.  Probably better not to dwell on the research that went into that discovery.

Once funds allowed I swapped from the ‘beer-coat’ and it's like to decent Gore-Tex based waterproofs.  These have done a very good job over the years in keeping me mostly dry and usually warm too.  Over that time I’ve usually bought Berghaus kit and generally been very happy with it, certainly when it was new. 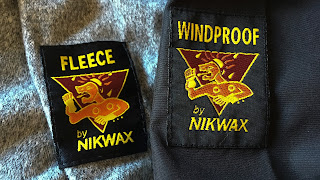 Over the last few years I’ve become aware of an increasingly large number of walkers and photographers wearing Paramo/Nikwax kit, and had rather assumed that this was just another (high-end) flavour of the same sort of kit.  The need to replace my own all weather gear led to me doing a bit of deeper investigation.

I am certainly interested in the reviews that talked about the Paramo 'directional' approach of attempting to push (or indeed pull) liquid away from the wearer.  I'm also interested in the environmental impact that Paramo (and Greenpeace) talk about - and particularly in trying to move away from the use of PFCs (fluorinated compounds) in outdoor clothing.

So on the basis that you can only do desk-based research for so long, I have just bought a set of Paramo Enduro garments - and I’ll report back on how I get on with them over the next few months, although I don’t think I’m going to try and repeat the beer test.
No comments: