The subject is (rightly) a key factor in figuring the best aspect ratio but the other factor that often drives my choice of image shape is what the picture is going to be used for.  I tend to imagine my images being viewed on a desktop or laptop monitor or as part of a stream of images on Twitter or Facebook - where a landscape format seems to fit more naturally, and a portrait image often needs an extra click to see the whole image.

So, since I really should practice what I preach, over the next few days I'm going to experiment with taking portrait format images on my morning walks. 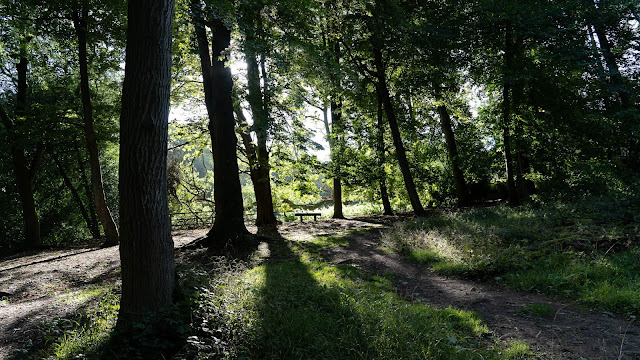 The landscape alternatives I took at the same time included 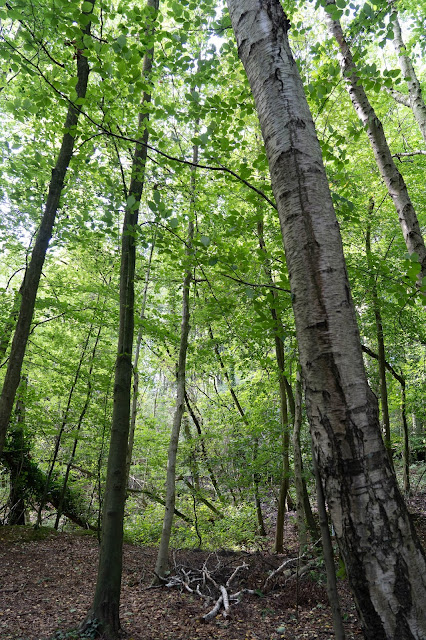 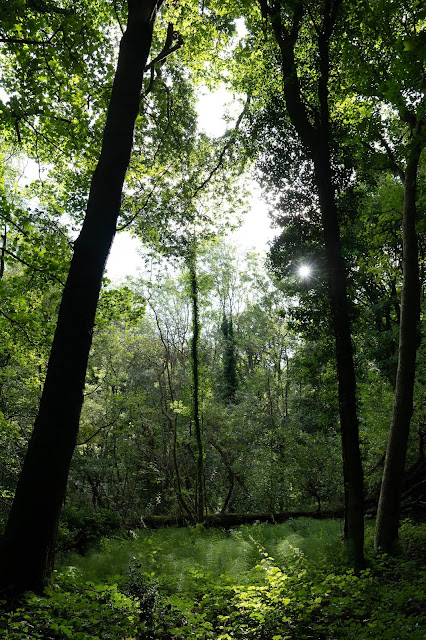 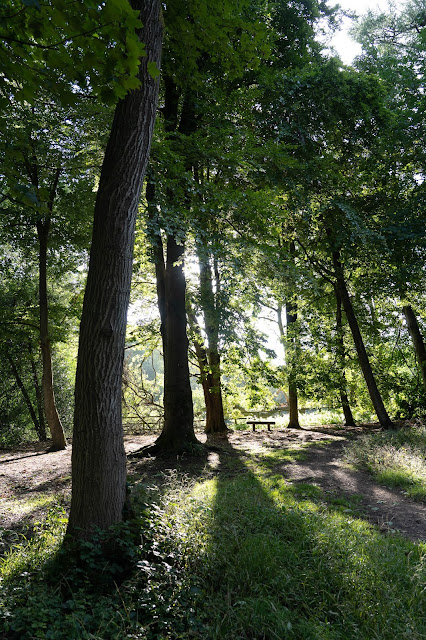 This was going to be the year to spend lots of leisure time in mainland Europe.

Early on in the year we booked three trips - and then added a fourth - all to various places in the Alps, with the expectation of being a bit pampered and getting the opportunity to wander in the mountains. And we'd decided to do it this year while we still had EHIC cards and travelling was supposed to be easy.

All the trips were booked through Inntravel (lovely folks, highly recommended) - and used a mix of trains and planes - and one flightless trip (to mark a landmark birthday) involved the luxury of the NightJet sleeper trains.  With the benefit of hindsight we were lucky to have managed the first of the trips before travel went completely haywire on the back of Covid-19, and very fortunate that Inntravel were able to refund the various deposits we'd paid for the other three (thank you, Inntravel).

The trip that happened (to Pertisau in Austria) was revisiting a trip from 2016 (first time in the summer, this time in the snow).  And the sleeper-based trip was partly revisiting previous day-train-based trips to Austria and Switzerland - and sleeper journeys in Scandinavia in 2011 and (I'm old enough to have used) a sleeper from Oxford to Edinburgh.

The theme of revisiting previous travels has been bubbling around in my head for a couple of weeks.  Maybe that's related to the inaccessibility of travel at the moment (at least the lottery of cross-border travel and quarantines), and the hope that eventually it'll be possible to use the words 'travel' and 'relax' in the same sentence (although I fear that the time when these can be linked with 'EHIC' and 'No-Roaming Charges' might have already gone).

I've already done this by day-trains, so I really would like to re-book the sleeper-based version that didn't work out this summer. This involved a morning Eurostar to Brussels, day-train to Cologne and sleeper to Innsbruck - and gets you into Innsbruck station just after 09:00 the next day, refreshed and ready to head on into the mountains.

I've been to the Lofoten Islands twice so far - and the travels were mostly surface based (with only the UK legs involving planes), so next time I'll dump the planes entirely.   The first time was using the train from Oslo to Bergen then the Hurtigruten (the Norwegian coastal steamer) up the coast from Bergen, and the other time using trains from Oslo to Trondheim and then to Bodø before getting a local ferry across the Vestfjord to Lofoten.  The third option for getting to Lofoten involves train journeys up through Sweden, then the 'Iron Ore Line' to Narvik (there's a little bit of rail track into Narvik, completely disconnected from the rest of the Norwegian rail network). All three of these routes (if I'm going to avoid flying) involve starting with the Eurostar - and going via Brussels, Cologne and Hamburg - and probably Copenhagen too.

And since we've figured out that any surface based route to Lofoten involves going through Denmark this would be an excellent place to add back into the future plans list - it's a lovely city to spend time in.

Although there are no ferries from the UK to Scandinavia (dreadful shame), there are ferries between various bits of Scandinavia. There are boats from Denmark to Norway, and there is also a ferry from the north end of Denmark to both the Faroe Islands and the east coast of Iceland. I've been to Iceland a couple of times but only to the area around Reykjavik - it would be good to do a complete lap of the island next time.  The ferry to the Faroes and Iceland is run by the Faroe-based Smyril Line using the MS Norröna, which once upon a time did used to regularly stop in both Bergen and Shetland - and it's high time it did so again!

Long ago I did a travel writing course in Cordoba and Seville (yes,  really) - on that occasion I tried to make enough time to do the entire trip by train.  Unfortunately work got in the way and there was only time to fly to Madrid before finishing the journey by train.  Next time I'll avoid the air miles and go via Eurostar to Paris and then onto Barcelona by TGV.

And now we're into nostalgia - long, long ago I spent a couple of summers Interrailing around Europe - in 1981 I used trains to explore the mountains in France, Switzerland, Austria and northern Italy, and in 1982 explored Italy from Venice in the north right down to Sicily.  This was in the old days when crossing the Channel meant a boat, TGV was just three letters, sleepers (at the budget I afford) were six-berth compartments and the train to Sicily went on the boat. Trains may be faster now than they were in the early 1980s, but that doesn't always help when you're using the train as an alternative to a hotel night, and you really don't want to arrive in the wee small hours. However the train to Sicily does still go on the boat, and when I do the trip again it'll probably involve going via Paris and Milan before getting the direct train all the way to Palermo (in about 20 hours)

But in the short term, it's much more likely that I'll be heading to Shetland - and rather than flying I'll be either driving or getting the train to Aberdeen before the overnight Northlink boat to Lerwick.

It would be good to try the Caledonian Sleeper to Aberdeen one day, but I'll not be using the Sleeper bus again.

I was challenged (thanks Ivi) to post my ten favourite travel pictures.

After a little bit of contemplation, I did eventually manage to find ten pictures from my collection, all from either the bleak North or the far South - and just to be even-handed, I picked five from each hemisphere.

The prompt from a fellow photographer to share some of my 'favourite travel photographs' has also prompted me to reflect on long haul travelling.

As anyone who's followed my photo diaries over the last few years will know, I've not been reluctant to jump on a plane - my back of the envelope (it was a big envelope) estimate is that I've clocked up just over 500 flights and 600,000 air miles over the years - and flown on everything from Airbus A380s down to the Britten-Norman Islanders, and from Row 1 back to Row 60-something (not forgetting some of the Islander flights where I wound up sitting in the co-pilots seat).

Having been set the 'favourite photo' challenge - I started by making a list of places I've been to as a prompt (and for this exercise I decided to stick to places away from the UK - I can always find another excuse to share my favourite Shetland pictures).  The long list covered places all over the world - ranging from the cold places in the north and south but also included a lot of hotter, mountainous, deserted places too.

The deal breaker for the shorter list was defining 'favourite' - I decided on places and events that had really stuck in my mind, where I can visualise and be back there at least mentally at the drop of a knitted hat.  And the places that I'd love to revisit.

All of which gets me to the long haul question. Do it or not?

Even before the Covid-19 mayhem, I was having major doubts about the ecological ethics of participating in what are essentially tourist trips to wild remote places. I was offered a space on a trip to the South Sandwich Islands (the more remote version of South Georgia) and decided against it partly on the basis of cost but more substantively because I didn't think I could defend the carbon footprint of several long haul flights and several weeks on expedition cruise ships.  Yes, you can offset the footprint in various ways - but maybe it's better to do the offset anyway and not actually do the travelling.

And the Covid question?  At moment I'd still be pretty concerned about spending an hour on the bus to Heathrow, never mind having to sit for 12 hours in Seat 38B surrounded by other people ahead of joining a cruise ship with a hundred other people who've also spent 12 hours on long haul flights from every corner of the planet.

One mental experiment I've thought about in the past involved trying to visualise the journey maps of the 300 (or so) people on a big plane.  Every one of those individuals will have been on a range of different transport types getting to the start point of their flight (ranging from taxis, cars and buses, through to feeder flights) and although they complete the flight together, they then set off on another series of car, bus, plane and maybe boat journeys.  And at every stage they are encountering other people making different (but equally complex) journeys.  I'm pretty sure there are epidemiologists making a living modelling these patterns but the complexity - and interconnectedness - certainly scares me!

Picking out my favourite pictures has definitely fired up my enthusiasm to be back around the colder wilder places.  These are currently being kept out of reach on public health grounds and I fear that my conscience may keep them out of reach in the longer term too.

In the short term, I'm expecting to do less travel, and for that travel not to involve much flying.

There will eventually be vaccines to help control Covid-19, but I'm very sceptical about low-emission flying being around anytime soon - but it would be good if NorthLink would do something about getting lower emission boats in service between Aberdeen and Shetland.

It didn't take too long to find an excuse to share a Shetland picture - even in a post about long haul flying.

Borne from long-stranding habits, I felt the need to produce a monthly report.
In summary, a very successful month - in addition to bringing two gardens under control, and painting a considerable fraction of the Shetland garden fences,  I spent a lot of time outside, carrying cameras, away from desks.
In Oxford this time was spent at the various local nature reserves (all without venturing more than 3 miles from the Oxford house), and on Shetland (after facing the social distancing challenges of a significant number of motorway service areas, a Premier Inn and two NorthLink Ferries) I spent almost 3 weeks without venturing more than three miles from the Shetland house.
On Shetland that 3 mile distance includes Sumburgh Head, Scat Ness, Quendale Beach and Garth's Ness - and an awful lot of sea birds.
A various points during LockDown, I was pretty despondent about making it back to Shetland before the puffins packed up their burrows and headed back off to sea for winter, so I was delighted to see so many puffins (and pufflings) still in residence.
Alongside the puffins, I was particularly delighted to spend time with a pair of Red-throated divers and with a group of very accessible black guillemots.

Key objectives for the coming month; another trip to Shetland - and continued avoidance of Zoom, Teams and Hangout meetings.  And maybe finishing the northern fences.
No comments: