After very relaxed three Christmassy weeks in Oxford, it was time to head back to the south end of Shetland.  As you might expect at this time of year there was lots of weather about, ranging from relatively warm dry weather, via pretty serious winds accompanied by horizontal rain, sleet and hail, through to bitterly cold clear weather.

These different weathers provided incentive to do different things.  The winds bring both dramatic waves to the cliffs and beaches and interesting ships to harbour seeking shelter.  The sea can be particularly photogenic (from the shore at least) in the days just after a big storm when there is still lots of energy in the waves, but it can be accompanied by good light.

The cold clear weather can provide mirror ﬂat lochs and lakes just crying out to be photographed. And if the weather is wet and windy, with low clouds and rubbish visibility there is incentive to stay inside in the warm and work on photographs and words from other trips. 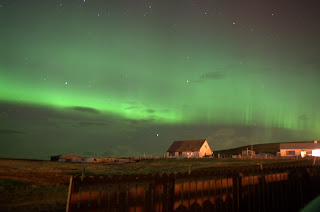 The cold clear weather also brings the tantalising possibility that the Northern Lights might put in an appearance.  The odds on seeing the aurora are better in Shetland than anywhere else in the UK, but a good aurora forecast still sets local media (both traditional and online) buzzing. Late January this year was marked by lots of sun spot activity, which led to quite a lot of aurora activity, including a couple of days when the aurora was directly over Shetland, rather than being far off to the North.  And on one of these days the clouds cooperated too, clearing away for about 40 minutes late one evening at the south of Shetland, and providing a magniﬁcent view of the Northern Lights.  After standing watching for a few minutes, nearly speechless (I wasn't actually speechless, but I was struggling to describe what I was seeing to my other half over the phone without going 'wow' every other word), I did ﬁnally have the wit to say that I needed to stop talking and take some pictures.  Once I got round to sharing the images via twitter I got requests from both SkyNews and STV News to use the pictures online and on their TV broadcasts.  One of the interesting aspects of my aurora watching was the role of online media, particularly twitter, both for sharing photographs after the event, but also for tracking what was happening during the evening as the aurora started to become visible. The aurora watching was very much a community activity.

The one thing I needed to miss out on in Shetland this January was the extra-ordinary event that is Up Helly Aa.  This ﬁre festival is held on the last Tuesday in January each year, and is the chance for Shetlanders to get in touch with their inner Viking, to dress-up in clothes both traditional and esoteric and to spend the best part of 24 hours getting wasted in the 'Halls' of Lerwick.  I've been on Shetland on the day after Up Helly Aa, and the only sound you hear is the wind (and people going "shhh" as you walk past the doors of their houses).
No comments:

Over the last few days a few people have asked about tips on photographing the Northern Lights. So, although I can't really claim to be an "aurora veteran", I thought I'd say something about the settings I used to take my pictures.


I’ve been looking for the Northern Lights for a while.  I remember vaguely peering into the skies in the Cairngorms on Christmas and Easter visits during my childhood, but without any expectation that I’d see anything.  However, over the last few years as my interest in, and enthusiasm for, all things Northern have become stronger it’s increasingly seemed like a gap in my “list-of-things-I’ve-seen”.   When we first visited Shetland in 2007 (actually five years ago this week) I did look optimistically out of the windows of the Sumburgh Hotel and conclude that all I was seeing were the lights at the airport.

Fast forward to late 2008. A serious attempt to see the Northern Lights was needed.  I decided that a good time to try and see the Lights was in the days between Christmas and New Year.  To try and make the most of the time available, I found the most northerly airport in Europe that you can fly to direct from London.  It’s actually Tromso on the coast of Norway, deep inside the Arctic Circle, and well known as a good place for seeing the Northern Lights.  The trip started promisingly.
On the day I arrived it was bitterly cold, plenty of snow around and the skies were clear but there was no sign of the Northern Lights.  Things degenerated after this.  The cloud cover closed in, the rain started (yes, it did warm up that much), and it quickly turned pretty snowy Tromso into slushy overcast Tromso.  I didn’t see the skies again after the first day – and there certainly wasn’t a sniff of an aurora.  And just when I got to point of thinking the trip couldn’t get much worse, I started feeling feverish.  By the time I got home to Oxford, I was decidedly unwell, and on the first day my doctor was back at work after New Year I was diagnosed with pneumonia, told I’d had a very lucky escape, consigned to bed and signed off work for January.  We’ll file that trip under ‘disappointing’.

Summer 2010.  Not you would think a good time for seeing the Northern Lights, but it is the next step in my quest to see the Lights.   The best place in the UK to see the Northern Lights is Shetland - it’s 60 degrees North, and although the clear skies can’t be guaranteed, the Lights are visible fairly regularly.  The problem is the unpredictability of the aurora – you need a mix of the right activity in the upper atmosphere and the co-operation of the weather closer to sea level.   The solution to the unpredictability is to be on Shetland for lots of time.  In Summer 2010 we bought a house on Shetland so that it is possible to spend time up here waiting for the Northern Lights to appear.

Winter 2011/12.  Amongst other travels to both far North and far South, this winter has given me some time to spend on Shetland.  I was pretty disgruntled at a dramatic show of the aurora in September  2011, when I was still down south in Oxford.  In late October when I was up on Shetland there was one evening when with a bit of imagination I could claim that the sky was brighter and greener that I might otherwise have expected, but it was difficult to claim that I’d “seen the Northern Lights”.  My ‘patience’ was finally rewarded earlier this week when at 10:30 on a Sunday evening, through the kitchen window, I finally saw the Aurora Borealis.  This was the Northern Lights doing exactly what the guide books enthuse about – green curtains waving slowly in the night sky.    Splendid.  Can now tick that off the list.
There are a few of my images from earlier in the week already on Flickr, and if I can add more I certainly will.

And as for what's next - I might get to see the Northern Lights again this winter either on Shetland or further North.

And then, it's probably time to start thinking about the Aurora Australis.