When I look back through my photographs from Summer 2012 one event dominates - unusually for me it doesn't involve time out and about with a camera on a remote island - it was the London Olympics.  And I still get emotional thinking about it.

Way back in 2012 the UK felt like a welcoming, confident, positive, multicultural, inclusive place - the 2012 Olympics was the platform to allow us to celebrate that along with welcome visitors from pretty much every country.

My Olympics started with watching the archery at Lords and the cycling road races in Surrey, and ended with two days on the Olympic Park watching water polo and diving.  My feeling at the time was that this was a special time in the UK's history - the usual busy and indifferent London was transformed into a city filled with smiles and a warm welcome.

My diary at the time says 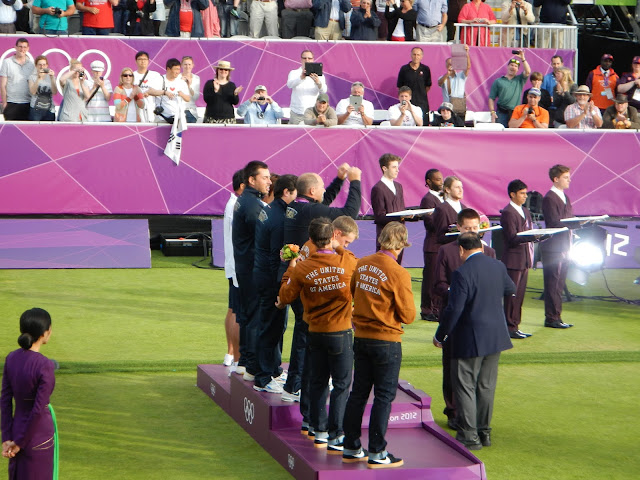 28th July 2012.  Today was a wonderful day to be in London. The city was heaving with tourists, supporters, athletes and volunteer guides, everyone seemed to have a smile on their face and the weather was wonderful too. Any Olympic cynicism I might have had has been swept away. Welcome to London 2012. 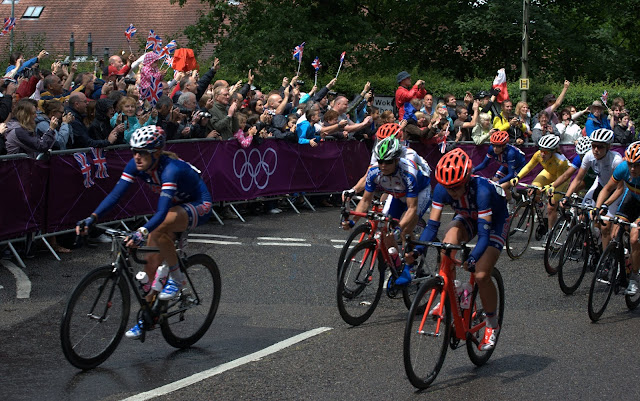 29th July 2012.  Although the weather didn't match up to yesterday, the crowds were just as good-humoured.

5th August 2012.  Absolutely bubbling with Olympics enthusiasm. Really didn't expect the feel-good factor to be quite so strong.  Am getting excited about getting into the Olympic Park tomorrow - and that's to see a Water Polo group match (that doesn't include TeamGB). 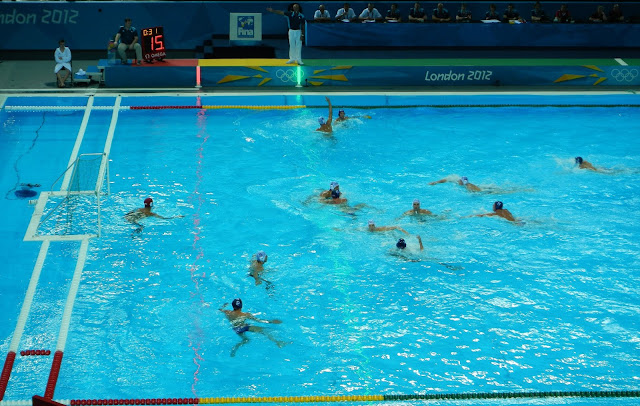 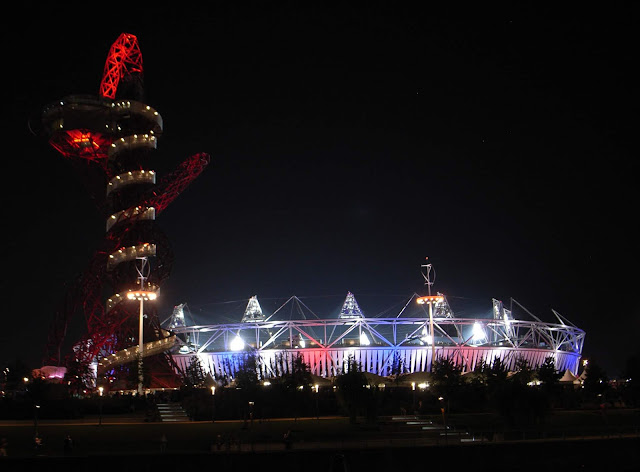 10th August 2012. Wonderful day in the Olympic Park again - this time to watch the preliminary stages of the mens 10 metre diving. Also made sure there was lots of time to just soak up the amazing atmosphere in the Park.  The whole Olympics experience over the last couple of weeks has completely blown me away - it's just been so much better than I could ever have imagined. The organisers have thrown an amazing party that everyone has wanted to join in with, the GamesMakers have been fantastic and TeamGB have been awesome.  And of course the Stadium was lit up in red, white and blue when we left the Aquatic Centre.

Part of my emotion looking back is despair at how far we (and very particularly England) has fallen since that summer.

Where we were "welcoming, confident, positive, multicultural, inclusive", England is now hostile, scared, negative, isolationist and exclusive.  Other people have posted much more elegant statements of this over the last couple of days but I was struck by just how positive my diary entries were at the time.

The London Olympics could, and indeed should, have been a stepping stone to allow us to become an even better place instead it's going to appear in the history books as a missed opportunity.

Yes, we threw one hell of a party for 17 days that glorious summer - but at this point I don't see how the UK (assuming it continues to exist) can ever regain the place we had in the world just seven years ago.

A few months ago I, perhaps foolishly, lamented that I’d seen every flavour of weather in a few days with the exception of fog.

Last weekend I got the fog.

It being high summer on Shetland, the temperature had soared into the low teens - and mostly it was entirely safe to venture out without a knitted Fair Isle hat, and for some of the time there were both blue skies and sunshine in evidence.

The calm weather gave plenty of opportunity for puffin action - and since it is definitely peak puffin at the moment there was plenty of that to be seen.  The last few weeks of the puffin season involve a lot of breeding adults bringing food back to the burrows and lots of the non-breeding adults hanging around on the cliffs tops (presuming trying to figure out what they are going to have to do once they are of breeding age, or possibly just scouting out desirable burrows for next year).

One potential risk (or bonus, as some of us might see it) is that the persistent fog can and does disrupt the flights in and out of Sumburgh.  And sure enough on the day I was due to fly off, the fog swirled low around the runways for much of the morning playing havoc with the timetables.  Then, suddenly as my flight time ticked round the clouds lifted and everything went back to schedule.

Oh well, maybe I'll be stranded on Shetland next time.

If you feel the need of more photos from Shetland - have a look at the latest Flickr album.

A few days ago, well 1st July to be exact, I was feeling particularly disgruntled that I was sitting in an office rather than being out and taking pictures in cool/remote/wild places.

And I happened to come across a picture that I’d taken on 1st July 2010.

Suddenly I was back on the Zodiac in the middle of small bay at the northern end of Svalbard  watching a female polar bear dive down to a submerged minke (or it might have been fin) whale carcass to bring up some old meat for its cub. 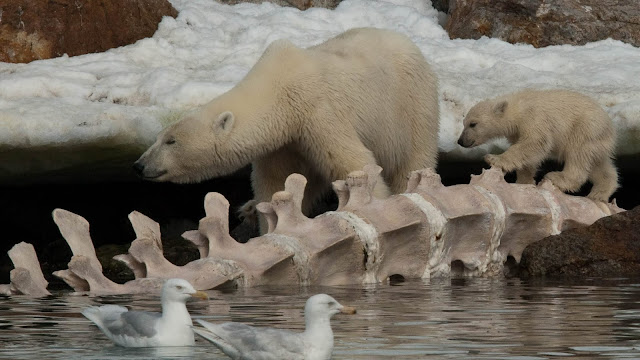 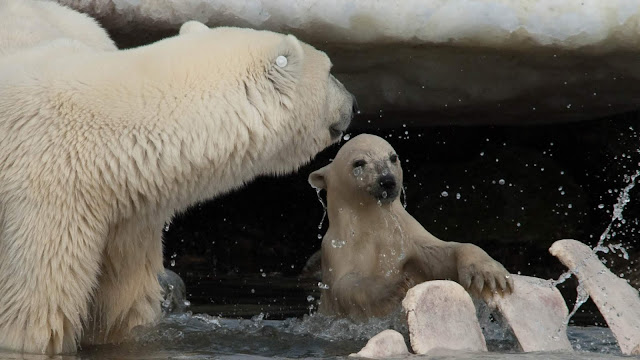 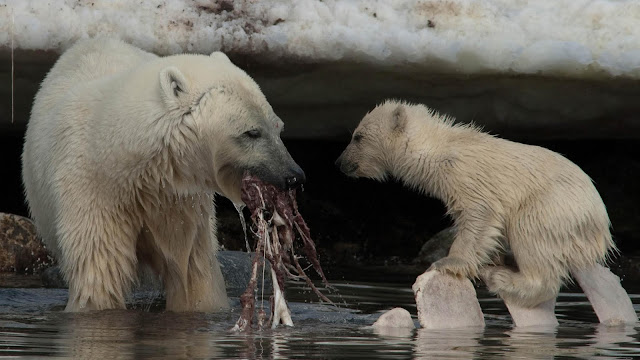 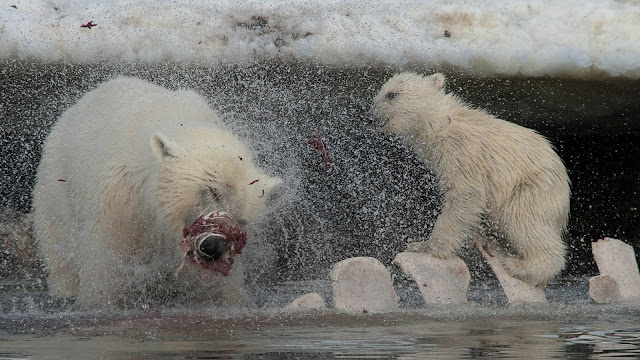 That was a Good Day.

That set me thinking.  Do I have a memorable picture for every day of the year?  I’ve been taking digital images for about 15 years, so I must have something memorable for most days at least?

So starts my #OnThisDay series - over the next 366 days (we get a leap day next year - not many 29th Februarys to choose from) I’ll aim to post something interesting on Twitter from my photo collection each day.


I’m already finding that some days have an embarrassment of choice, while others are rather more of a struggle.  Maybe July wasn’t the best month to start, over the years I’ve tended to regard July and August as working months (when everyone else goes on holiday).
No comments: