Six Buses and a Boat - Getting to Shetland, April 2016

I’ve used several different routes for getting from Oxford to the south end of Shetland.

This time (since I didn’t need a car, and I baulked at the airfare being quoted) I thought I’d try using the direct Megabus Sleeper service from London to Aberdeen, spend the day pottering around in Aberdeen and then get the ferry from Aberdeen to Lerwick in the Shetland Islands.

The trip started very smoothly - the X90 runs from Oxford straight into Victoria Coach Station in London, and gave me just time to get something to eat before joining the queue for the Megabus Gold S9 Sleeper service, direct to Aberdeen. 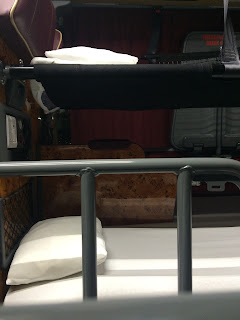 I was booked on a lower bunk on the S9 - which meant I had a reasonable mattress but had to limbo into the bed and had no space to sit up (In fact I could only just turn over).  An upper bunk was more like a hi-tec hammock but would have offered the scope for sitting up.

I concluded that I probably could manage to cope without turning over for the next ten hours, and closed my eyes and dozed off.  About an hour later I woke up and realised that the bus had stopped and the only movement was the bus being bounced around by passing traffic.  In the absence of a window (from a lower bunk all you could see was the rain-spattered window and the clouds overhead) I consulted my phone to discover that  I was about 5 miles from home in Oxford, on the hard shoulder of the M40.  The bus had inconveniently decided to have an electric issue.  It did however manage to limp to the Cherwell Valley Services where it finally expired.

Eventually a replacement bus appeared.  No sleeper bus luxury this time just a conventional coach - by this time it was about 01:30 and we’d covered about 65 miles in 4 hours and at this rate our 540 mile journey to Aberdeen was going to take about 2 days.  However rather than taking us to our intended destination at some point it was decided that where we really needed to be was Glasgow.  So at about 8AM we were offloaded at Buchanan Street bus station (I suppose it might have been mentioned at some point when I was asleep, but I certainly wasn’t the only one surprised by the turn of events).

After about 20 minutes loitering without much intent (I had got as far as checking train times for the rest of the journey), another MegabusGold coach appeared - the now busier than usual, and late, scheduled service from Glasgow to Aberdeen.  One fellow traveller did express the view that he certainly hoped this wasn't the same bus we’d started the journey on in London.  This time there was no sign of bunks, the bus was set up in its normal daytime layout - complete with a cheerful stewardess who would regularly foist scones, tablet and Irn Bru on unsuspecting passengers. This bus trundled its way across Scotland stopping briefly in Dundee before reaching the outskirts of Aberdeen. At this point the bus decided that it had way too many tyres and offloaded one with suitably dramatic sound effects. End of bus 4.

We were only about 10 (driving) minutes from the end of the journey, so there was a temptation to complete the journey on foot - but the traditional Aberdeen spring welcome of sleet was in full force, so I just sat still.  The still remarkably cheerful stewardess (who was aware that most of us were at the wrong end of a less than entirely successful journey from London) started drawing comparisons with “On the Buses”.  About 20 minutes later, just as the sleet stopped, yet another bus appeared to successfully get us into Aberdeen Bus Station just under 4 hours later than planned. 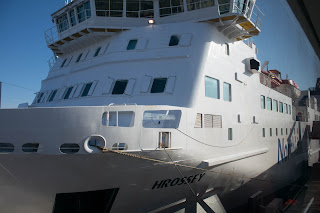 I had been wondering what I was going to do with my day in Aberdeen.  In fact there was really only time for a decent lunch before wandering over the Northlink Ferry Terminal to check in for the MV Hrossey - where a cabin and a hot shower were waiting for me.  And I’ve probably never slept better on the ferry to Shetland - and we arrived on time on a chilly but beautifully sunny Shetland morning.

Having done all the other land bits of the journey by bus I thought I’d complete the journey with the aptly numbered Number 6 bus from Lerwick which stops about half-a-mile from the Shetland house. 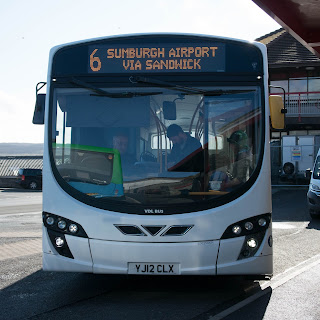 Time for a little bit of an experiment.

I've been picking out pictures to show at Oxfordshire Artweeks next month (7th - 15th May, if you've got your diary to hand).  This year I'm sorting out wide images rather than square ones - this definitely lets me see some of my image archive in a different light.

A little selection here - more on the walls next month.  Do come and visit - full details on the Artweeks Website.