In the far north of Scotland, beyond the traditional northern scenery of mountains and glens lies that mysterious place called the Flow Country.

Caithness and Sutherland are far beyond where most tourists reach, and the few that do get to this part of the world are usually on their way to John O’Groats.  The landscape here has always been forbidding but without the grandeur of the mountains in the south.  There are few roads across the Flow Country, and those that do exist are single track with occasional passing places.  There is one railway line (The Far North Line was listed for axing by Beeching, but eventually reprieved) that threads it’s way North from Inverness across the moor lands until it reaches Wick and Thurso - just occasionally connecting up with the roads.

The Flow Country covers over 1500 square miles of blanket bog up to 5 metres deep that has been building since Scotland was last covered with ice.  Over the time the blanket bogs have been developing in Sutherland, the Romans and Vikings have both come and gone, and bears and wolves have both disappeared from Scotland.

The recent history of the area hasn’t been uneventful either.

In the 19th Century Sutherland was one of the most dramatic sites for the Highland Clearances - the shameful episode where landowners evicted huge number of residents so that they could expand their sheep farming interests and later their sporting estates too.

In the 20th Century the Flow Country suffered further attack from the forestry industry which drained great swathes of the country to make it more suitable for industrial scale tree growing.

Evidence for both of these ‘transformations’ are still obvious.

There are over-grazed moorlands with big herds of deer - the evidence for over-grazing most dramatic when you see lochs with islands.  The vegetation on the islands is the clearest indication of what the surrounding land would look like given the opportunity.

There are still dense sterile pine plantations in many places - the close-packed trees might result in straight trunks, but completely exclude any other plants, birds or animals. And worse to allow the trees to grow on what was wet bog, lots of drainage networks needed to be dug to lower the water table and as a consequence, completely undermine the layers of peat.

These forestry activities have now been hugely scaled back - and the remaining forests are gradually being cleared, and the drains blocked to allow the water levels to rise again. Already there are indication that the landscape in recovering and the bird life is starting to return.

This year there is also a new viewing tower on the reserve, which lets you get a rather better perspective on the landscape than is possible from ground level. There are also plans afoot to establish a Field Centre on the reserve to allow researchers to spend time based on the reserve to better understand how the ecosystem there works and to be able to showcase that work to visitors.

It would be wonderful if, as the wet land in the Flow Country recovers, there was also a route by which the over-grazing could be wound back to let some of the other parts of the Flow Country recover too.
The Clearances in the 19th Century flushed people out to make space for sheep and eventually deer, a 21st Century version of the Clearances could push out some of the hunting stock and allow the native species such as wildcat and lynx to be reintroduced, and perhaps even one day with bears and wolves joining them.

The Flow Country is a special place, I hope the development work will not only restore the damage of the last 50 years, but also the longer term ecosystem damage from the last 200 years.

I’ve been fortunate to have had the chance to spend a bit of time visiting the Flow Country over a couple of summers - I’m looking forward to being able to see what the country looks like in winter too.

As I've been doing the various iterations of the Lairig Ghru walk this year (the plan being to do the same walk each month during 2015) I've been saying that while I'll stick to hotels during the winter I'll revert to camping once the weather improves. Once it gets to June (even in Scotland) it's hard to say this with a straight face and book in to an hotel - so for this first time this year the tent was broken out.

And, perhaps surprisingly, the Scottish weather co-operated - I got to spend a couple of dry nights camping and a couple of downright hot days in the mountains.  It was about six weeks since the last walk, and the seasons had clearly moved on.  There was much more bird life visible (and audible) below the tree line, although there were fewer grouse making their presence felt higher up.  The gorse was in flower, and there were lots more insects around (including the legendary scottish midge). The snow banks that were still very obvious in early May have mostly disappeared except in a few protected gullies.

The lower level walking in the forest was very easy, but higher up the boulder fields were pretty attritional under the bright Scottish sun.  Early in the year the boulder fields are covered with snow and offer pretty simple walking, in June there is no alternative to scrambling through, between and over the boulders.  The way-marking cairns high up on the Lairig Ghru are often pretty much impossible to spot until you've passed them.  My only consolation was watching a couple of mountain bikers struggling through the boulder field - they needed to do the same boulder-to-boulder dance I was doing while carrying bikes.

After two days of sunshine (often referred to the Scottish summer) weather reverted to type. The cloud base dropped to Loch an Eilein level, and now that my tent was throughly soaked I decided to pack it up and move on to the second target for this trip.

A couple of years ago I'd driven up through the Flow Country in Sutherland en route to Orkney, and have been saying that it deserved a longer visit. This time I arranged to spend several days around both the Flow Country and the north coast of Sutherland.  There have been changes around RSPB reserve at Forsinard since my last visit - the hotel appears to be permanently closed, there is a lovely new viewing tower on the reserve and pretty much every house in the village appears to have an anti-RSPB sign. I don't (yet) understand where the disagreement lies between the RSPB and the locals.   There are also quite a lot of areas around the Flow Country where there appears to be industrial-scale forest clearance underway. I'm hopeful that this is all part of the programme to restore the peat lands there were damaged by large scale drainage and tree planting in the 1970s and 80s, but on the ground it's not always clear quite what's going on.

After a couple of days exploring the Flow Country, I spent a bit of time on the north Sutherland coast - area I've not visited for over 40 years. There are some wonderful beaches along this bit of coast - and, even in the summer, not very many people visiting them.


If you get a chance to visit here, you should also stop off at the Smoo Caves - a dramatic little series of caverns!


And the hospital visit? I decided to ignore an ear infection on the assumption that it would sort itself out.  A GP in Ullapool told me that I'd got to a state where some intravenous antibiotics were needed - so if you ever wind up in Inverness, the Raigmore Hospital is highly recommended.  Although I'm hoping to avoid needing a repeat visit next time I'm in the north of Scotland. 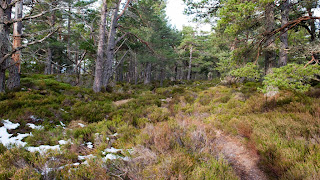 I saw today that Rewilding Britain is starting to become visible, and is looking for a first Director.

This is a new charity being established in the UK, to give nature the chance to reclaim at least part of the country.

I've heard chatterings about this for a couple of years and I am both excited and delighted to see this initiative finally getting off the ground.  The vision brochure that accompanies the job advert is inspiring.  It paints a picture of a Britain where we might one day see a wilder side to life all over the country.

So often I feel that the country around us has been beaten into submission by years (and generations and centuries) of over exploitation.  It's time to think a bit harder about this over exploitation and to do something about it.

I'd love one day to be able to walk through a restored forest with just the glimmer of a hope that the rustle in the undergrowth nearby might be a wildcat or lynx.

I'd love one day to walk along a natural river bank with the hope that the ripple in the water might be an otter or beaver stalking it's patch, and to know that the bird song in the spring isn't that of a species tottering on the edge of extinction, but is part of a thriving local natural ecosystem.

I'd love one day soon to stop having to explain to people what rewilding is, simply because it's now part of everyday life in every part of the country.  This month I'm taking part in the Wildlife Trust initiative to encourage us all to do something wild everyday in June.  I'm one of ten thousand people who've said they want to go wild in June - next year I'd like to see 100,000 getting involved.

The reality is that it's going to be an uphill struggle to get rewilding into the mainstream, there are going to be many vested interests talking the initiative down.  And the results won't be instant either. We might well see some changes in the short term, but most of us won't see the bigger changes, but we will at least have the comfort that we gave the changes a chance to happen.

I hope you're going to support the project, I certainly am.

The vision brochure I mentioned is on the Friends of the Earth website - read it, share it.  I'm sure we're going to be seeing and hearing a lot more about this project in the next few years.
No comments: