Back in January I decided that it might be both interesting (and fun) to visit the Cairngorms regularly throughout the year.  This evolved into a plan to walk up into the Lairig Ghru from Loch an Eilein on the Rothiemurchus Estate at least once each month during 2015.

Early December marked the end of the project.

Having started the year in snow - I also pictured finishing the year in snow, and fortunately (despite the crazy warm start to winter we've had) the weather co-operated.

It co-operated so well that the A9 presented challenges to traffic although it did look very pretty as I waited for the lorries and the police to sort themselves out near Blair Atholl.


On the day I'd designated for this months walk I was fortunately to get low temperatures, but with bright sunshine and almost no wind.  This meant plenty of snow underfoot and also the start of the winter ice forming on the Rothiemurchus lochs.

At lower levels in the temperatures had been wandering up and down around zero - the result being that some of the paths were a bit hazardous to walk on.


However, higher up the ground was properly frozen, and it was a delight to have snow under my boots again.  One of my regular view points, Top Tree guarding the entrance to the Lairig Ghru, looked very dramatic in the fresh snow.

I walked up as far the 'the way mark stone ' which I decided was a suitable turning point, in December even on a clear day the daylight hours in the Cairngorms are limited.

At Lochan Deo after a cold clear day you could see the water surfaces gradually freezing over - in some places as a fairly featureless surface, but in other places fantastic ice crystals were visible.


And to mark my last Cairngorms report for 2015 - a still winter evening at Loch an Eilein.  I've probably visited here on about 50 days during 2015 - and photographed this view more times than is sensible. Won't be long until the ice slides across the water.

If you happen to be in/around Headington during December I'm going to be taking part in three pre-Christmas activities.

At all these events I'll be happy to enthuse about photography in (mostly) cold places and give you the chance to buy pictures, cards, calendars, mugs, notebooks, key rings, fridge magnets and rulers! 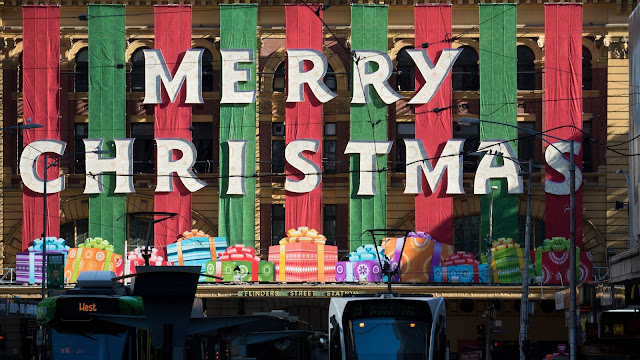 Lovely riverside location, great weather in November, fabulous coffee and excellent food. Only real downside - it’s a 21,000 mile round trip from the UK.

I got to spend a week there - and it did involve an awful lot of time spent sitting in economy-class seats on very large planes!

I was staying in the Melbourne CBD near the banks of the Yarra River - an ideal place to stay if you want decent coffee, good restaurants and a splendid choice of skyscrapers.

My excuse for a few days in the heat (and it got up to 33C one day - which is rather warmer than I like) was to spend time talking with folks from Monash University.  This meant that I got to spend time around the Monash Campuses at Clayton and at Caulfield.


And at this time of year there really is no escaping the approaching holiday season - although I gather the odds on a White Christmas in Melbourne are pretty long.

The November visit to the Cairngorms was to see a mountain ready for winter.

The temperatures were bubbling around 10-12 C, and there was (usually) rain falling, but the overwhelming impression was that the landscape had been through its autumn retreat and was just sitting patiently waiting for the temperatures to fall and for the rain to change to snow.

On a couple of deceptively still days I walked from Loch an Eilein to Piccadilly and back in darkness (my claim to know the paths so well by this stage in the project that I could do the walk blindfold was put to the test) and then again from Loch an Eilein up to the Top Tree - the last big path-side tree as you climb up into the Lairig Ghru.

The lack of wind meant that a few of the tougher midges were still around - surely that’s the last of them for the season!


During the weekend the cloud level wandered up and down dramatically - at times dropping right down to loch-level and just (occasionally) lifting completely to let some late afternoon sunshine light up the little castle in the middle of Loch an Eilein.

I'm going to be open for Oxfordshire Artweeks on Saturday 14th and Sunday 15th November - if you are going to be in the Oxford area over that weekend, do come and visit. 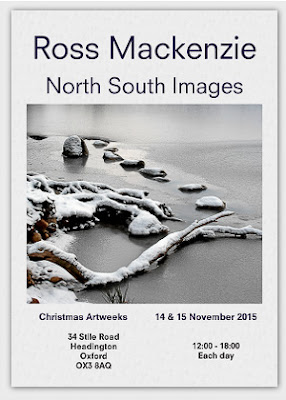 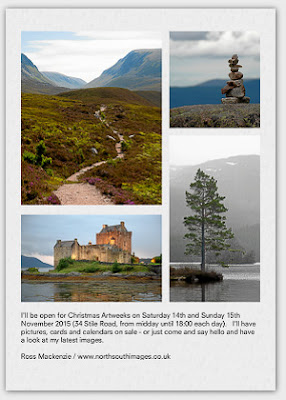 Instalment 10 of my 2015 visits to Rothiemurchus and the Lairig Ghru - and again good dry weather on both of the walking days I had in the Cairngorms National Park.

The still weather (and dry walking) made it fairly easy to complete the walk from Loch an Eilein up to the top of the Lairig Ghru.  The biggest challenge was that the still weather was almost ideal midge conditions - they weren't noticeable when walking, but they were more than plentiful enough to make sitting still very unpleasant.

I suspect that October might have been my last chance to get to top of the Lairig Ghru this year, by next month I suspect that my weather luck might have run out - and there probably isn't going to be enough light to do the full walk anyway.

Loch an Eilein, Changing and Unchanging

I've walked up into the Lairig Ghru at least once each month in 2015 - each time starting from the car park at Loch an Eilein, and inevitably taking some pictures of the Loch with the iconic pine trees on a little head-land at its north end.

The cloud level may wander up and down, the sunshine may come and go and the state of the water (from frozen to still to windswept) may change but there is something unchanging about the scene through the year.

After the September visit to the Cairngorms, there was just enough time to fit in a few days on Shetland before heading back to other activities in southern England.

But it was just long enough to have a look around the harbours in Lerwick and Scalloway.


And to wander along a few beaches.


And to explore a few cliffs and headlands.


And to chat with the local livestock.


And to get a quick glimpse of the Northern Lights.