Travel was again pretty much curtailed - still haven't been on a plane, train or bus since early 2020 - and travel has been primarily day trips between Oxford and Surrey plus a number of extended trips to Shetland (achieved by car and boat).

Having got the travel grumble out of the way, and on the plus side, I'm actually quite pleased that my carbon footprint has been so reduced and it's been splendid to have had so many days when the big decision was which Shetland beach to wander on.

My vague target was to walk 2000 miles this year - haven't even made it to 1500 - again, I think I'm going to blame the auks, I spent far too much of the Shetland summer sitting watching them to clock up the walking miles I might otherwise have done.

And since this seems to have turned into another post about auks, I might as well point out that I've seen five species of auk around Shetland this year - puffins, guillemots, black guillemots and razorbills and, finally, a little auk - much less common around Shetland than it's cousins but no less welcome.

The month has been spent back in the south (mostly the Deep South) - and most of the photographs have been tree (or at least autumn-colour) related.

Location: A wee bit in the Cairngorms, then Oxford

Having found very few trees around Shetland last month, it's been good to catch up on my arboreal photos this month - and it feels like the autumn colours were pretty good this year.

It also been good to spend a little bit of time birding around Oxfordshire too - aside from watching the usual suspects around the garden - was particularly pleased to spend time with the snipe at Otmoor and with the kingfishers along the banks of the Thames.

And just in case you might have gotten the idea that sunrises are only found on Shetland - or that snow only falls in winter.

Good to have been able to spend so much of the month at the south end of Shetland - and particularly to have seen so many fantastic sunrises and sunsets (there might well be dramatic sunrises on Shetland in the summer, but they are way too early for me).

Location: Shetland (but just made it to the Cairngorms for the end of the month)

Puffins seen: None (but a few guillemots plus one little auk)


Between sunset and sunrise - there's always a chance (at this time of year) of getting a glimpse of the mirrie dancers.

And between sunrise and sunset - this being showery Shetland, there's always a chance that there will be rainbows on show.

And when there aren't sunrises, sunsets, aurora and rainbows - there are always waves to watch (which are lovely, except on days when you are due to catch the evening ferry south!).

This being autumn on Shetland - there are always wildlife specials on offer too - occasionally the glimpse of a fin, sometimes a visiting little auk and (unusually) mass landings of By-The-Wind Sailors.

And finally, one more thing, trees - these in the Cairngorms National Park (more trees in the November report!).

And any month that closes with a glimpse of the northern lights is OK in my book.
No comments:

Part 1 was razorbills, Part 2 was tysties and now Part 3 of my 'Auk Summer' reflection is all about puffins.

And, I know I'm biased, but is there anywhere better to see puffins than Sumburgh Head?  There are probably places to reliably see bigger groups of puffins, there might be places where you are more likely to get puffins wandering around your feet but I'm pretty sure there's nowhere where it's easier to see puffins.  I'm also not aware of anywhere else where you watch puffins and eat fantastic cake at the same time.

Every summer I say that I'm going to keep track of how much time I spend at Sumburgh Head - and every year I lose track of the number of visits never mind the number of hours spent looking over the walls just watching what the puffins are up to.

So did I have a favourite picture from the 2021 Season?

In getting to this I found I needed to divide the pictures into three groups.   Firstly, there's the puffins just hanging out on the cliff-tops category. I still can't decide the winner here - it's either the puffin in the rain or the puffin in the mayweed. 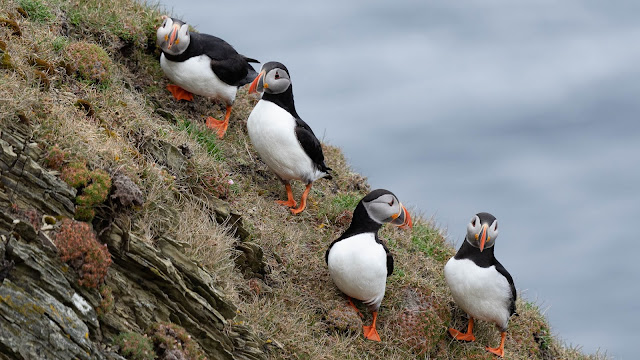 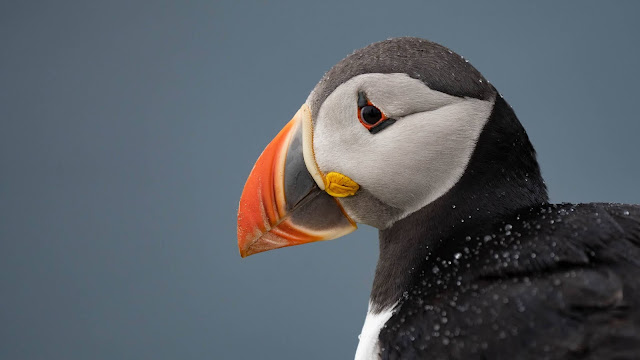 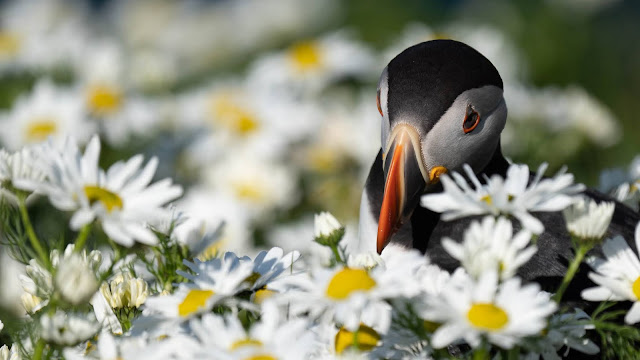 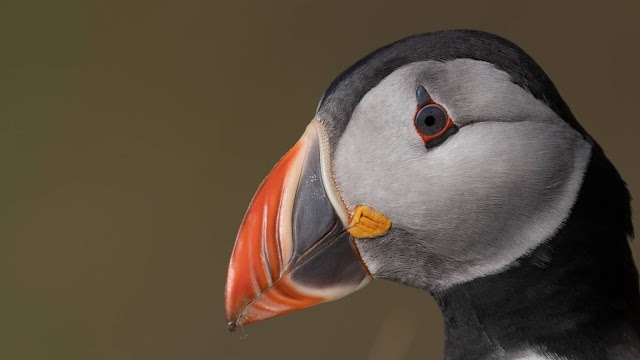 The next catagory is the pairs catagory - a heady mix of bill-rubbing and fighting!  Favourite here might be the first picture (taken at the end of the season as the puffins are making plans to head out to sea) 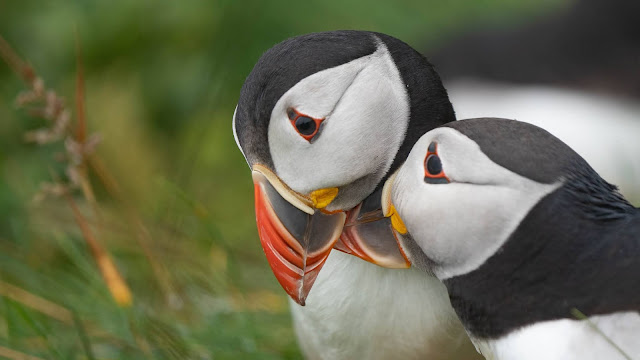 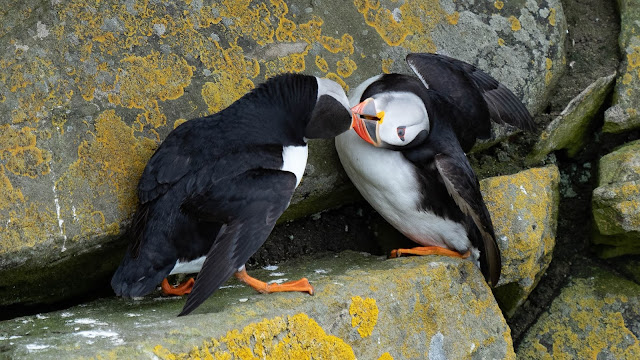 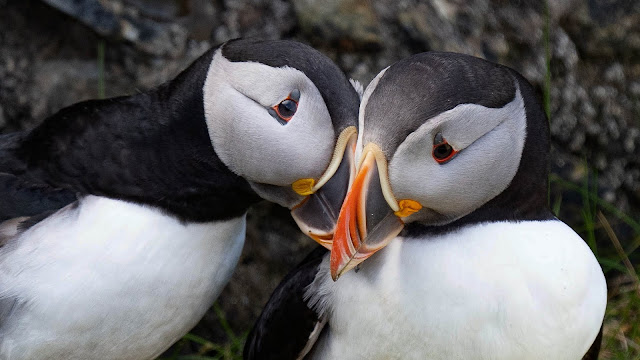 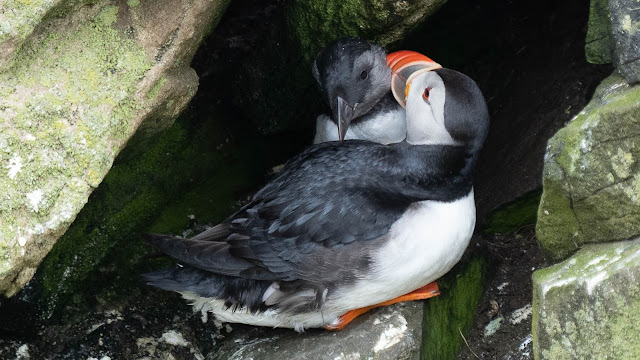 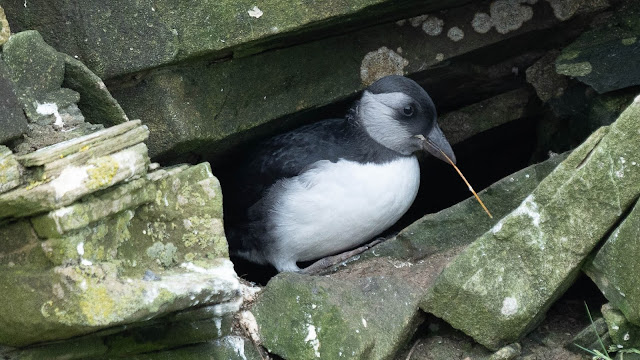 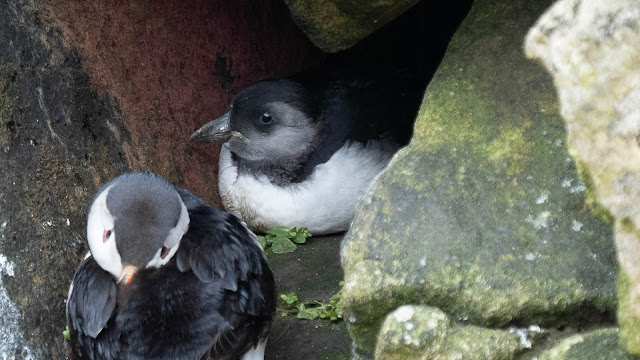 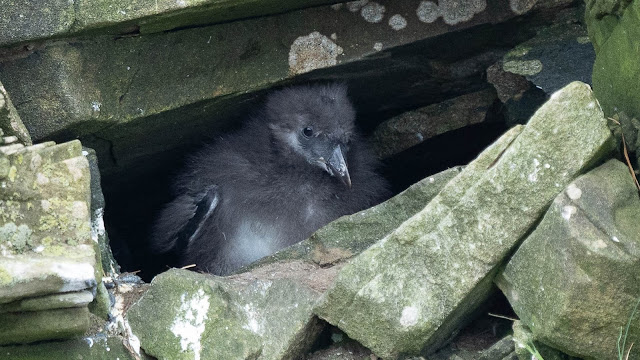 And the winner of the puffling category... 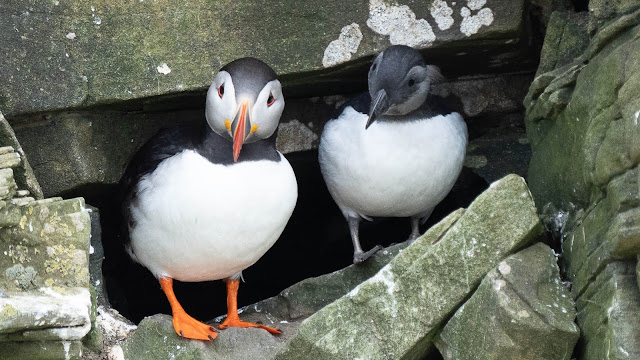 I didn't give all the pufflings names, but this one is LB (it's a long story) posing beside his Mum (or possibly Dad) - and I think this is probably my favourite puffin picture of the season!

Next year?  More of the same please. And more cake.