A collection of my images from remote places are going to be on show in The Boiler Room at the Jam Factory in Oxford from mid-November.

Over the next few weeks I'm going to publish a blog post about each of the regions I've included in the exhibition where I’ll tell the stories behind a few of the images. 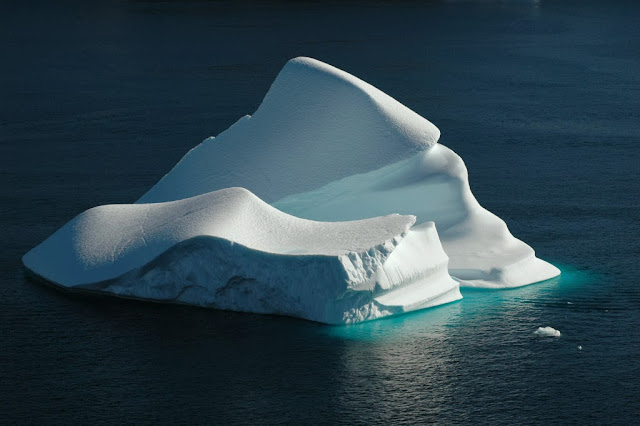 Eastern Greenland is prime iceberg spotting territory.  From the coastline of any of towns along the coast you can watch bergs on the horizon being carried south by the East Greenland current.

Sometimes these bergs will get pulled in closer to shore until they run aground.

This particular berg was in King Oscars Havn just outside the town of Tasiilaq.  Tasiilaq isn’t the easiest place to get to – I got there by flying from Reykjavik in Iceland to Kulusuk, and then getting a helicopter ride to Tasiilaq, in the summer the only other way to get there is by boat. After that if you want to go any further than the edge of town, walking is your only option.  I walked out of town onto a deserted headland where I could look down onto this grounded berg.  The scars and grooves on the berg show that it had rolled and calved many times as it melted on its journey south from northern Greenland.  This berg would have stayed put near Tasiilaq for a few days or weeks until it melted enough for it to either float on, or to roll again and unpin itself from the sea bed.

One of the delights of photographing icebergs is the knowledge that an image can never be repeated.  After just a few minutes the light was different, in a few hours the water changed and after a few days the berg would have been transformed out of all recognition.

Every iceberg image is unique. 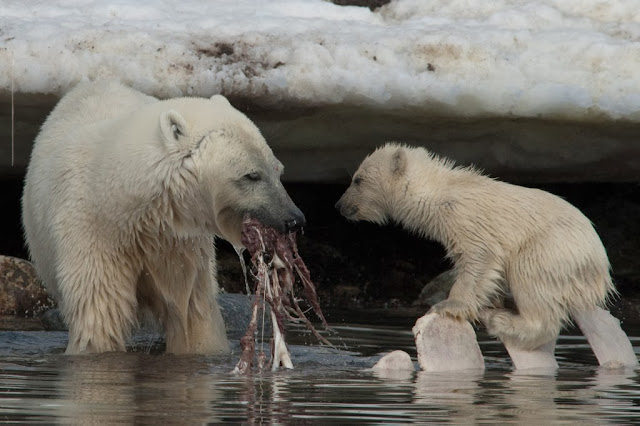 A whale washed ashore in the Arctic is a feeding bonanza for polar bears – even an old carcass is still likely to have lots of meat on it.  This carcass, probably of a Fin Whale, in a remote bay at the northern end of Spitzbergen Island in Svalbard had already been ashore for over a year when I visited.  When it was fresh, bears had come from huge distances to eat their fill on the water’s edge.

By the time we turned up the bit of the skeleton above the waterline had been picked clean – but that meant that ‘Mum’ needed to drive deep into the water to tear off huge mouthfuls of meat to feed herself and her cub.

While feeding time was underway we were able to sit in a Zodiac just a few metres from the bears, watching as the adult got a full feed, and the cub discovered just how cold Arctic water really was. 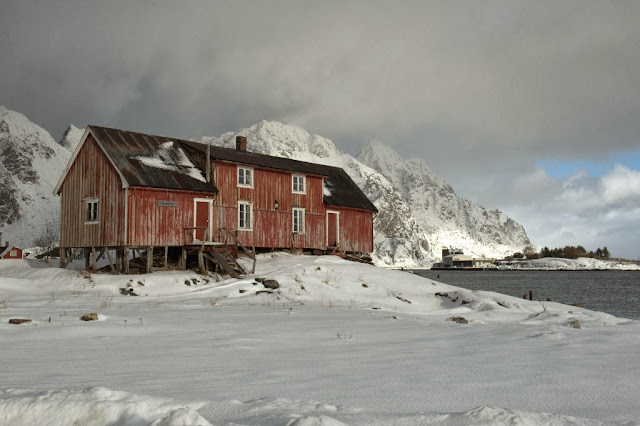 The Lofoten Islands are just off the west coast of Norway about 100 miles north of the Arctic Circle.

Despite this bleak location the islands aren't usually covered with deep snow – the Gulf Stream stretches far enough north to ensure that this.  When I visited in February the islands had just been transformed by a heavy fall of snow – the custodian at a local museum felt the need to apologise that she hadn't yet had the chance to clear her paths and car park.

Around the Lofoten coastline are lots of red-painted, black-roofed, white-windowed wooden huts.  These are the rorbu, the traditional fishermans huts.  Many have now been transformed to luxurious holiday cottages others, like this one at Henningsvaer, looks as if it’s ready for the more traditional use.

In the background there is just a glimpse of the jagged ridge of mountains which run along the length of the Lofoten Islands – from a distance these peaks all seem to join up forming the ‘Lofoten Wall’. 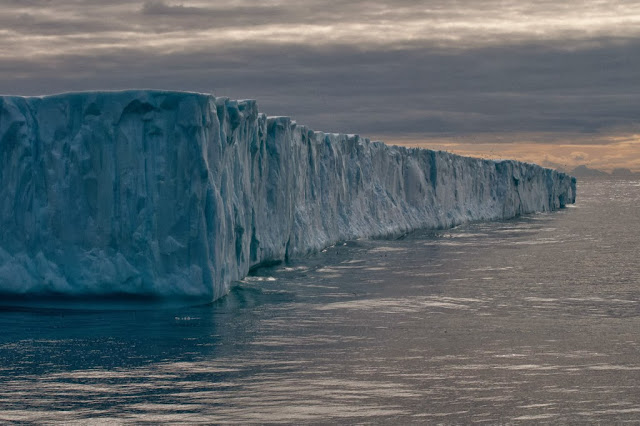 The first glimpse of this berg was no more than a white line on the horizon.  The crew agreed that it looked a bit like a huge tabular berg, but it couldn't be because you don’t see that sort of berg here.

As we continued north-west across Baffin Bay the white line got longer, and gradually thicker too, then we could pick out the abrupt ends of what really was a tabular berg.

The crew, long experienced in both Arctic and Antarctic waters, decided that this deserved a detour. Several had seen bergs like this (and this big) in the Antarctic, but none had seen a berg like this in Baffin Bay.  The berg was close to two miles long with about 20 metres of ice visible above the water line – we couldn't see the top surface of the berg from the highest point on the boat.

We spent about an hour exploring the edge of the berg, which had probably split from Petermann Glacier in northern Greenland before drifting down into the southern end of Baffin Bay, getting as close as we could to the face.


Images from this collection are also available on the new North South Images website.
No comments:

I first travelled on the Eurostar in April 1995.  At that time it was a new service and left from Waterloo Station and then trundled slowly across Kent, before dipping under the Channel to emerge at Calais at which point the train dramatically accelerated. That first trip was to Brussels, and one of my recollections was of the train decelerating again (to Kent speeds) after Lille as it crossed into Belgium - the Belgians were as slow as the Brits in getting high speed lines in place.

In September 2013, I had my second experience of the Eurostar.  In the intervening years I'd done about 400,000 air miles, but hadn't left the UK by train again. In my absence, the train companies had built what is now called HS1 and  transferred the Eurostar service to a nicely rebuilt St Pancras station.  That trip took me to Paris and on, via the TGV network, to Switzerland.  I wondered at the time when I'd next get to use Eurostar, and vowed that I wouldn't let another 18 years go past.

The appearance of a useful looking meeting in Brussels on development in the Arctic was the ideal excuse to head back to St Pancras and to Belgium.  The journey this time was significantly faster than the 1995 version, and I certainly wasn't aware of any dramatic changes in speed as we went from country to country.

My Brussels trip in 1995 was just a day-trip for a meeting in an hotel just beside the Atomium on the outskirts of the city.   On this trip I managed to spend a couple of nights in the city, in a city centre hotel close to Brussels South station (also called Brussels-Midi), where the Eurostars arrive.  This meant I had time to sample a least some of the delights of Brussels.  A country that appears to run on beer, chips and chocolate must have something going for it.

I had visited Brussels once before, in summer 1977, and from the few pictures I've got from that trip I didn't appear to be very impressed with the Manneken Pis.  Having visiting it again this time, I think my scepticism was justified. There are lots of stories about the statue, and why it's there but I really don't understand why it has become such a famous landmark. I found it very easy to resist the encouragements to buy a replica for the mantlepiece.

The Grand Place is a different matter altogether. This really is a magnificent square, and is well worth visiting both for the architecture and the people watching.  The lighting is very dramatic, so an evening visit is well worth fitting into your timetable.

The meeting I was attending was in the EU Quarter of Brussels, which in addition to lots of dramatic new EU-centric buildings also has a number of equally dramatic (albeit shorter) old buildings.  The location meant I had an excuse for an early morning wander round the Parc du Cinquantenaire - built in 1880 to mark 50 years of Belgian independence.

There is a small selection of pictures on Flickr from the limited time I had to be a tourist in Brussels.

As with so many city visits, I wish I'd added in an extra day for wandering so I could take more pictures and try a few more of the local beers. 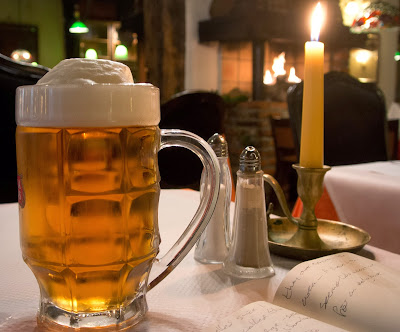 It's a pretty good bet that you won't get snow on Shetland in September or October, but anything else is highly likely.

You might well get gale- (and sometimes storm-) force winds that will attempt to blow you off the cliffs, in one direction or the other.  You might well get fog, which while it probably won't delay your flight to or from Shetland too much, it will wreak havoc with any plans you might have to get to Fair Isle. You might even get gale force fog, which at least means that you can't see the cliff edge as you get blown towards it.  You might well get big seas which will make the ferry crossing to Aberdeen very entertaining, and the wee boat to Fair Isle, at least two notches beyond entertaining.  You might get bright sunshine, still air and dramatic sunrises and sunsets.  And if you get lucky, clear overnight skies will coincide with a little bit of auroral activity and you'll get a glimpse of the Mirrie Dancers, the wonderful Shetland name for the Northern Lights, and even if the aurora doesn't play ball the dark skies might give you some dramatic starscapes.

I've spent the last three weeks in the house at the south end of Shetland, and have seen all the variants mentioned above.

The ever changing autumn weather (although on Shetland 'ever-changing' is a reasonable description of the weather at any time of year) also changes the wildlife that can be found. In the autumn Shetland draws in a huge variety of migrating birds some intending to spend time on Shetland, other blown there en route somewhere warmer.  The bushes and fields have been thick with unlikely birds over the last couple of weeks, and the roads have been choked with visiting bird-watchers all intent on adding another tick or two to their lifetime lists.

My own personal highlights (I don't really get that excited by seeing birds that have been blown to places that they shouldn't be visiting) was seeing huge number of porpoises in the bay in front of the house and seeing otters on a beach where I hadn't seen them before.

I suspect the porpoises are in the bay for a lot of the time, but with waves blowing through it can be pretty hard to spot them.  When the water is mirror-smooth they are easy to see - I counted about 40 in the bay one morning, and another more diligent observer got to  75.

Shetland has the highest density otter population in the UK, allegedly averaging one otter for each mile of coastline (and Shetland has a lot of miles of coastline) and that probably means that otters are visiting pretty much all of the coastline quite regularly.  I am always delighted when I spend time watching a beach where I've not seen an otter before, and I get rewarded by a new sighting.