With the start of my temporary escape (henceforth just TE) from timetabled routine approaching, I'm still struggling to stop thinking like a tourist.

Over the last 30 years travels have tended to be largely planned around two, or in a few cases three, week blocks of time away from the lab or office. These blocks have had to be planned far in advance to allow things to be fitted around work projects and domestic plans and commitments (and in a few cases trip availability).   I'm still thinking like this. Over the next few months I've got three 'slots' booked each of which could have been done in normal annual leave - although I certainly couldn't have done all three in a three month period. Part of the challenge is booking trips through the usual tour companies. Their bread and butter is mostly based around planning and selling trips to folks taking normal time off from work and returning on a fixed timetable, so a lot of their trips fit that pattern. And to be honest using these companies is generally the easy way to arrange to go places.

I hope that realising that this is how I'm still thinking will give me the chance to do something different later in my TE. My short term action has been to tear up all the ideas that would fit tidily into routine life, there will be chances to do these things in future years. Next step is to figure out something that I wouldn't find easy to fit into the timetables. That probably involves buying one way tickets rather than return ones, and being more relaxed about what comes next. The last time I can remember buying a one-way ticket ticket was when I came back to the UK from the US almost 25 years ago - it's high time I bought another one.

After a couple of years of contemplation and a lot of time talking to people and following the blogs and tweets of various career-breakers, I’m about to join their ranks.
At the end of September I’ll be packing up my desk at the Open University, handing over the Learning and Teaching Systems reins to my colleague Paul (twitter.com/paulbeeby - I hope he’s going to start tweeting soon so I can keep track of what’s happening), and leaving Moodle and e-learning behind for six months.
The first three months are planned – Sri Lanka, Shetland and the South Atlantic - but although I’ve got lots of ideas for the second three months (including some places not starting with S), I have for the first time in a very long time got no firm plans.
One of my frustrations, over the last five years particularly, has been the lack of time to think about the trips I’ve been fitting in around work commitments.  I’ve rushed off somewhat manically to the airport as soon as I could, and spent as much time away as possible – and then plunged back into work again.  One consequence has been not enough time to go through the photographs I’ve taken or to put together the blog postings, or any longer pieces of writing, from the trips.
My hope during the six months way from the office is to have time to make the trips a bit slower than they might otherwise have had to be, to reflect on and to write about my travelling, to spend some longer chunks of time in our house in Shetland, and maybe get re-enthused about e-learning.
I'm not planning to update my work blog again until next Easter – I will be posting here, and I’ll be tweeting (twitter.com/rossmackenzie) when connectivity allows.
Sitting in my study in Oxford on a Sunday morning, I have lots of conflicting thoughts about the time away.  Part of me can’t picture being away from the OU for such a long time (I first joined the University in late 1995 – and the commute to Milton Keynes is just part of what I do most days).
Part of me can’t picture doing anything other than returning to the OU in April. And yet another part of me can’t picture getting back into the formality of the daily commute again.
I'm certainly looking forward to the opportunities this winter will present - and I will give the occasional thought to the roll-out of Moodle 2 at the OU.
1 comment:

Back in the Wild North - Shetland September 2011

Decided it was time for a quick gardening trip up to Shetland.

My work colleagues main pre-occupation ahead of the trip, aside from the observation that it was a long way to go to cut the grass, was that the weather was going to be bad ‘up there’.  The stories of Hurricane Katia crossing the Atlantic to wreak havoc on Britain were all over the media – and that led to the assumption that if it was going to be bad in England, it would inevitably be worse in Scotland and, therefore, near apocalyptic on Shetland. 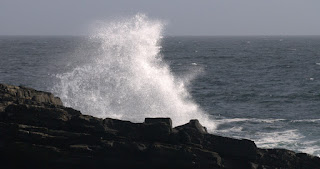 I’m pleased to report that Shetland came through the battering unscathed – indeed the weather was better (and certainly warmer) than when I came up for the Tall Ships in July.   When I arrived the airport windsock was hanging limp at the end of the runway, and despite some rain over the weekend – the sun did shine, otters got seen, beaches got walked, boats in the harbour got photographed and the grass did get cut. 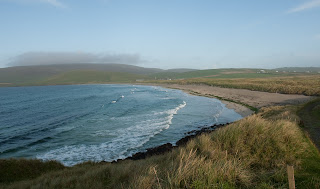 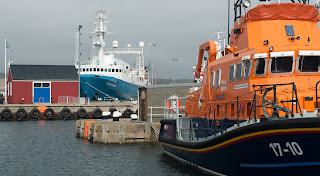 And when I turned up late back in Milton Keynes everyone just assumed I’d been delayed by the weather and had to spend an extra night on Shetland.  No such luck. Flybe managed to strand me (and lots of other folks) in Aberdeen overnight by encountering “technical  problems” with the plane coming up from Birmingham.

These and other photographs are on Picasa and Flickr
No comments: