"I Wish I Could Go Travelling Again".  Stacey Kent, Breakfast on the Morning Tram (2007)

The daily rummage through my map box has, perhaps inevitably, triggered nostalgia for past road trips.

Two of my favourite road trips were in North America - only six months apart.  Firstly joining up a series of National Parks in and around the Rockies in the US in September 2006, then driving between Vancouver and Athabasca in northern Alberta in Canada in April 2007.

The first trip was entirely vacation, and the second (mostly, -ish) a work trip.

The US trip was very vaguely planned - hotels were booked a day in advance and the standard dinner conversation theme was 'where do we go tomorrow?'.  The Canadian trip was booked in advance (couldn't be late for the various work meetings in Vancouver, Edmonton and Athabasca) with quite a lot of guess work about how long the driving was going to take each day, given that April is still snow season in that part of Canada.  My one real concession to the weather was renting a 4x4 truck rather than a standard 2-wheel drive compact we had for the US trip.

The US trip started (and finished) at Denver airport, and meandered through Colorado, Wyoming, Montana, Idaho, the Dakotas and Nebraska, and featured time in Rocky Mountain, Yellowstone, Grand Teton, Glacier and Badlands National Parks plus Devils Tower and Scotts Bluff National Monuments - and at Mount Rushmore.  And to ensure a taste of genuine Americana, the list of hotels included Comfort Inns, Quality Inns, Days Inns, Best Westerns plus a variety of Motel 6s and Super 8s. And once we got back to Denver Airport (not in the original car - it gave up the ghost somewhere in rural Montana) we'd clocked up just under 3000 miles.

The Canadian trip started with a few days in a waterside hotel in Vancouver (conference venue) - just round the waterfront from Stanley Park and in a room with an awesome view across the Coal Harbour marina.  By virtue of good planning the next meeting was in Edmonton three days later which gave me plenty of time to drive the 1300 km, stopping off in Revelstoke and Lake Louise en route (passing through Mt Revelstoke, Glacier, Yoho and Banff National Parks).  After Edmonton a short (by Canadian standards) drive north to Athabasca.  Next confirmed stop after that was to drop off the rental truck back at Vancouver Airport - but the opportunity to spend a couple of days around the Jasper National Park wasn't one to be passed up (although I did manage to resist the temptation to head up the 'scenic route to Alaska', maybe next time).  By the time I dropped the truck off at the airport I'd clocked up just over 2000 miles.

At this point, I'd settle for the opportunity to do the road trip from Oxford to Aberdeen, but one day long road trips like this will seem possible again...

So how do you counter wanderlust in a LockDown in the middle of a pandemic?

Do you reflect on places you've been to in the past?  Or do you plan speculatively for trips you might be able to do at some point in the future?

Do you browse through the old photographs of places you seen? Or unfold the old maps to revisit the paths you've walked, the trains you've ridden and the roads you've driven?  Or browse the old guide books that you've bought both for trips you've taken and for trips that were planned and didn't (for various reasons) ever happen?

Over the last 11 months, I've tried all the above strategies.

The latest ploy is digging my way through the 'old maps' box - this is where all maps (with the exception of Ordnance Survey maps) wind up.  This is a mix of 'proper' maps comparable to the OS maps, and usually associated with places we've gone on walking trips, road maps (of various scales) and 'scenic' maps which have been acquired when I've not been able to find real maps.  Some of the maps are associated with trips from the 1980s and 1990s - other are so new that they were bought for trips last year that ultimately got Corona'ed.

Recently, I've spent time 'wandering' around the Achensee, along the banks of the Charles River in Boston and through the French Pyrennes.  I've toured Denmark, wandered the Old Town in Edinburgh and been back to The Faroe Islands, and rounded off the week by heading back to Grindelwald in the Swiss Alps. 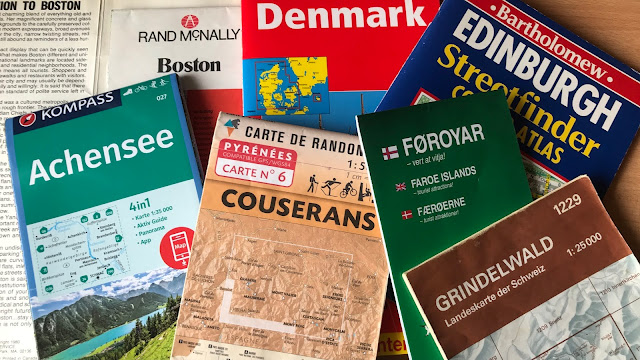 And does this work in fending off symptoms of wanderlust (you know, itchy feet and a deep desire to spend more money at Stanfords in London or to plan trips on Seat61.com)?  No, of course, it bloody doesn't.  Makes it much worse, but it does at least help the time pass.

It would have been good to have started the year (as I have done in past years) by spending time in the snow in the Cairngorms, then heading to Shetland for a spot of Viking spotting (Up Helly Aa season) and wave watching.

However, although there is plenty of snow in the mountains and both snow and waves on Shetland at the moment, the Vikings have been stood down for another year and I'm trapped in Oxford.

Puffins Seen: None - but lots of sparrows, starlings, magpies and red kites