Flights of Fancy (and other means of transport)

One of the problems with the UK is that it's just too small.  I can drive from Oxford to the southern-most tip of Cornwall on the same day, I can make it to northern Scotland in under two days, and even our blessed train companies can match sort of range in a couple of days.  Maybe this is why I've got a fascination with long journeys - and particularly with trying to do more ground based travelling.  When we first visited India nearly 20 years ago we pushed our travel companies really hard to figure out ground-based itineraries (and when one of the trips coincided with a pilots strike this turned out to have been a really good idea).  The plus for us then was that we got to see a lot more of rural and village India than we would have done otherwise - and the food on the journeys was certainly better.  It was probably better for the environment too - but I don't remember that being talked about in 1991. When did we acquire 'Carbon Footprints'?
In the 'maybe' pile at the end of my desk I've currently got plans and ideas for three long, mostly ground-based, journeys.  There was a fourth idea - involving the Silk Road and the Karakorum Highway, but the trip to Xinjiang last year seems to have got these out of my system (temporarily at least).
The first long journey doubles as an ego trip (Is this where the term "ego trip" comes from?).  I thought it might be fun to go to the Ross Sea via Mackenzie Country.  A little bit of investigation suggested that while it is possible to get to the Ross Sea via South America and the Antarctic Peninsula it is only occasionally possible and is stupidly expensive, so it would make more sense to get to the Ross Sea from southern New Zealand (that's how Captain Scott and all the other early Antarctic explorers got there), and if I'm going to have to go to New Zealand I might as well spend a bit of time there in Mackenzie Country too.  Getting to New Zealand is pretty difficult these days without spending some time on planes - even the Man in Seat61 only offers a few suggestions about looking for passenger places on freighters, but there are ways.
The second folder hooks into my desire to spend some time talking photographs of wildlife in Africa - the easy way is to jump on a plane at Heathrow and fly due south for 10 or 12 hours.  A much more entertaining way to contemplate this (in my book at least) is to look to the last Royal Mail ship still in regular service which shuttles regularly between Ascension Island, St Helena and South Africa - with the occasional loop back to Portland in southern England.  The added bonus would be the chance to spend a bit of time on Ascension Island or St Helena - I spent a few hours on Ascension last year but didn't manage to leave the airport, next time it would be fun to stay a bit longer.  The real attraction of this would be to spend a bit of time seeing what life was like on a really isolated island.  St Helena is due to get an airport at some time, but the current economic climate means that it won't be any time soon.
The third folder (which is actually at the top of the pile at the moment) is mostly about Japan, which is ideal for train-based travel - with the observation that it ought to be possible to get there by train (and boat) too.  The Eurostar link is the obvious first step (snow in Kent permitting) - then sleepers across Europe to Moscow and then the Trans-Siberian Railway to Vladivostok.  In theory at least it's possible to get a scheduled ferry from Vladivostok to Japan - but I gather that it's actually pretty challenging to book a passage on it.  So maybe I'll agree to fly for the last leg of the journey if I've done the first 12,000 km by train.  I did wonder about completing a round the world rail trip by finding a way to get across the Pacific, and then crossing Canada or the US by train (another 6,000 km) before heading back to the UK.
The real problem with all these journeys is the time they take (and the money too) - Phileas Fogg and Michael Palin both gave themselves 80 days to get round the world - and I suspect that doing any of these trips without resorting to jumping on a plane to get home who take this sort of time too.  A friend recently suggested that going round the world on 80K would be a very pleasant way to do the journey - I wasn't sure if she was talking in dollars, pounds or euros.  I don't think it would take quite as much as £80K to do any (or even all of these) but it's going to cost more than a couple of weeks in the Med.
I haven't quite figured how to break the time-money conundrum (I'd like to have both), but I'm working on it.  Then I'll figure out if there are enough blank pages in my current passport.
No comments:

Most years we do the RSPB Big Garden Bird Watch (this year it's 30th & 31st January), but this morning turned into a rehearsal.  An hour peering out of the windows produced a huge amount of bird life, no doubt some of it provoked by the fat-ball bribes we've been distributing around the garden since the cold weather started.

There's nothing particularly spectacular in the list, but it was good to see some goldfinches back (no idea where they went in the snow), and it's been a while since we've seen long-tailed tits in the garden.

We'll be doing the BGBW next weekend - but it probably won't result in nearly such a good haul.
No comments:

In what seems to have now become another regular event - the country (at least the bit I'm in) has ground to a halt again under a layer of snow.

At the moment there is 8-10 inches of snow on the ground (with drifts significantly deeper than this in places) - the most snow I've seen in Oxford in the 20 years we've been here.

The presence of lots of snow certainly makes everyone more friendly, and makes the place much more photogenic.

The turn of the year is an obvious time to reflect on the last 12 months, and to give some serious thought to the next 12.  It’s also the time when I move from one Moleskine to the next.  To the uninitiated the Moleskine  is just a (usually) black notebook, but for me (and others I’m sure) it’s where I capture my thoughts about my travels, including where I've been, where I am and where I’m contemplating for future trips.  I’ve tried a few notebooks and travel journals over the years, but the Moleskine is The Real Thing.  It slips into pockets and bags easily, is just the right size for boarding passes and my passport and it can cope with the wear and tear that travel can inflict. It may not be very Web 2.0 - but it is one of my travel essentials. It’s my aide memoire to help me label photographs after the event, it’s where I capture scenes when I can’t use a camera, it’s my companion when I’m eating on my own, and it’s my travel planner when I’m sitting in airports or on planes. 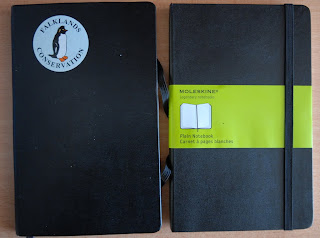 The just-retired Moleskine (with the FC sticker on it) took me as far east as Beijing, as far west as Montreal, as far north as the Cairngorms, and as far south as Sea Lion Island in the Falklands.   On 10 trips it and I have clocked up about 40,000 air miles, and spent 67 nights away from Oxford (including 2 on boats, 4 on planes and 2 in yurts).

As I flick through the old Moleskine I very quickly get pulled back into the experiences I’ve had over the last year and the people I met up with on my journeys.

There’s a little map showing where I abandoned my car in a blizzard at Brize Norton airbase (which I did need to find the car again).  There’s a reminder of the glorious heat on Ascension Island (a contrast after being literally stuck to the runway in Oxfordshire - the wheel-chocks were frozen to the ground).  There’s a reminder of the excitement of sitting amongst the Gentoo penguins on Sea Lion Island, and amongst the black-browed albatross on Saunders Island.  There’s a reminder of the impossibly salty curry served on Alderney, and of the just inedible breakfasts offered along the Silk Road in Xinjiang (I’d never fantasised about muesli and cold milk before). And the observations on how Budapest has changed since 1997 - then lots of US-style burger bars, now lots of US-style burger bars plus western coffee shops albeit with significantly better cakes than we get in the UK.

I also got a bit caught up in visiting places beginning with B.  Barcelona, Beijing, Bishkek, Boston, Budapest, Birmingham and Bromsgove.

There are reminders about the fun (and frustrations) of travelling with groups of people.  I’ve enjoyed meeting up with people who make my travelling efforts look positively amateur, and talked enviously with folks who make a living travelling.  I’ve also enjoyed having time to absorb being in new places without the distraction of crowds and companions.

There’s also a slightly smug entry about being able to get into a Business Lounge during a long lay-over at Istanbul airport where I was able to have a shower and get a bowl of cereal with cold milk. Sorry.

And there are even a few cryptic notes about work in various places - mostly ramblings about IMS specifications and about OERs.

The notebook also highlights my satisfaction in getting to places and doing things that have been on my to-do list for years.  I got to travel along the Silk Road and (at least) some of the Karakorum Highway (I’ve got old guidebooks for these dating from 1993 and 1996).  I got to photograph hump-back whales breaching off the Boston coast - and my bird photography came on leaps and bounds (OK - it’s difficult not to take decent bird photos in the Falklands).

So where is the new Moleskine promising to take me this year?

At the moment two trips are booked (to Shetland and to Svalbard) - so I should get further north this year than last but other than that the plan is blank.  I’d like to get to Japan - and it would be fun to go by train and boat rather than plane. I also feel that my travel pedigree is a bit lacking since I’ve still got one continent missing (Africa).  I’ve also got a real hankering to get back  to Antarctica & the Falklands (and to visit South Georgia for the first time) and to see more of Bhutan. And I’ve not been across the Pacific Ocean. And I’d like to spend more time in the Middle East....

Probably won’t get to do all of these this year. But where-ever I do get to will be captured in my Moleskine.

Happy travelling in 2010 - and may all your journeys be long haul.

P.S. In 2008 I came to the conclusion that my travelling carbon footprint was something like 16 tonnes of CO2 - in 2009 this dropped to just over 11 tonnes (7 from flying and 4 from driving).