If you want to see puffins at close quarters, it doesn’t get much better than Sumburgh Head.  I’m not sure if you can actually see puffins without getting out of the car – but it’s pretty close, and it’s only a few steps from the car park to the puffin-covered cliffs.   July is also a really good time to see the puffins en-masse.  In good years there will be lot of feeding of youngsters obvious, just ahead of fledging time.  However, this year hasn’t been a good year for lots of the seabirds and there has been very little evidence of the puffins bringing in sand-eels for youngsters, for which read there aren’t many pufflings around – and the attentions of the bonxies and the hoodies will have taken a toll of the limited number of chicks around.  This means that lots of the adult puffins are just hanging around on the cliffs waiting for the signal to head out to sea for the winter.  The guillemot cliffs, usually alive with noise, are already bare – the poor breeding season leaving the birds no reason to stay around. 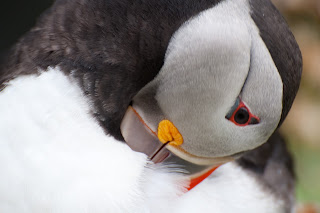 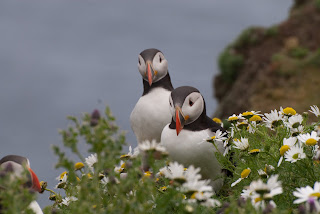 This July there was another reason for heading to Shetland – the return of the Tall Ships. These magnificent boats last put in an appearance in Shetland in 1999, so their reappearance was long overdue. The harbour at Lerwick is pretty picturesque at any time, but adding in the Napoleonic-era sight of masts and spars towering over the waterfront buildings really does make it special. There were almost 60 official Tall Ships in town, including 15 of the huge Class A boats (for those of the right age – think, Onedin Line), and lots more tourist yachts in town to see the festivities.  During the few days leading up to the events in Lerwick, the ships were gradually turning up around the Shetland Islands – their progress being more than slightly impeded by the fierce (and unseasonal) northerly winds coming straight down from the Arctic. I'm not sure that the helicopter escort provided to the Europa was needed, but it did add extra drama to the images. 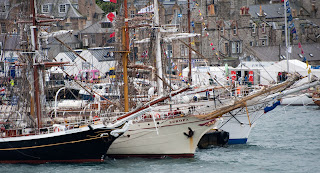 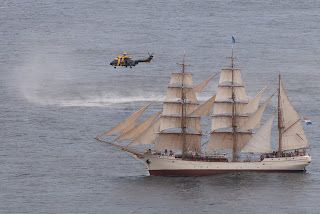 There have always been close links between Shetland and Norway. There is a still controversial story about Shetland being handed over from Norway to Scotland in lieu dowry at the time of a Royal wedding in the 15th Century. Over the years there have always been important trading links between Shetland and Norway.  One of the reminders of this close link is the Shetland Bus memorial in Scalloway, commemorating the Second World War communications link into the Norwegian Resistance movement. The Tall Ships provides another reminder of close relationship between Shetland and Norway. Almost a third of the bigger boats were flying Norwegians flags, and these mostly crewed by teenagers. The breaking news from Oslo on the Friday cast a shadow over the event – every boat in harbour had flags at half-mast, and the Norwegian boats suspended their ‘open-ship’ tours on the Saturday. 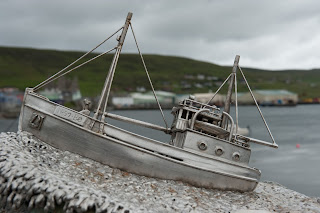 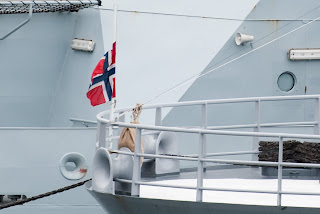