Once upon a time, long long ago, there were lots of ferries across the North Sea from the UK to Scandinavia.

The Shetland Island service stopped in 2007, although frustratingly you can still often see the ferry as it passes close to Shetland, pausing occasionally for just long enough to allow a medical evacuation by helicopter to Lerwick Hospital but not to pick up or deposit paying passengers.  The ferry from Newcastle ran for many years, I first used it in 1972 and most recently in 2004, until the plugs were pulled on the service in 2008.

As the gannet flies it’s about 230 miles from my house on Shetland to Bergen.

Getting my car from the Shetland front door to Bergen, involves at least one ferry to mainland Scotland, then either an 2000 mile drive via the Channel tunnel, up through Germany, Denmark and Sweden before a final drive across Norway or a variety of ferries across the southern end of the North Sea and the mouth of the Baltic, and still needing to drive most of the 2000 miles.

I was therefore delighted to see an announcement recently that there just might be a return for the Newcastle to Bergen/Stavanger service.  Norwegian Seaways are talking, it appears very seriously, about putting this route back into service in early 2014.

I would be even more delighted to see the Shetland Islands properly back on the shipping routes. Historically Shetland has been at the centre of trade across the North Sea, and further west too.  The issue of better communications with places like Norway and the Faroe Islands do periodically make it up the political agenda, but rarely with any visible outcome.

At the moment there are no regular ferries from Shetland to anywhere other than Orkney and Aberdeen, and only a very seasonal weekly flight from Sumburgh to Bergen to complement the regular flights to Aberdeen, Edinburgh and Glasgow.  The only way that Shetland can be called well-connected is entirely virtual – the SHEFA-2 undersea communications link from the Faroe Island to mainland Scotland, briefly comes up for air on Shetland.

I would be first in line to book a berth on a ferry from Lerwick to almost anywhere but in the absence of that I'm already looking forward to being on the Norwegian Seaways service from Newcastle.

When do bookings open?

A collection of my images from remote places is going to be on show in The Boiler Room at the Jam Factory in Oxford from 12th November 2013 until mid-January 2014.

Over the last  few weeks I’ve been publishing a blog post about each of the three regions I’ve covered in the exhibition where I told the stories behind a few of the images.

Part I was an Arctic Assortment, Part II was an Antarctic Aggregation.

This is Part III, images from Shetland.  This selection doesn't reflect all of Shetland, which is over 100 miles from end-to-end, in fact the four images here were all taken within circle about 2 miles across at the extreme south end of the Shetland, my patch on the islands. 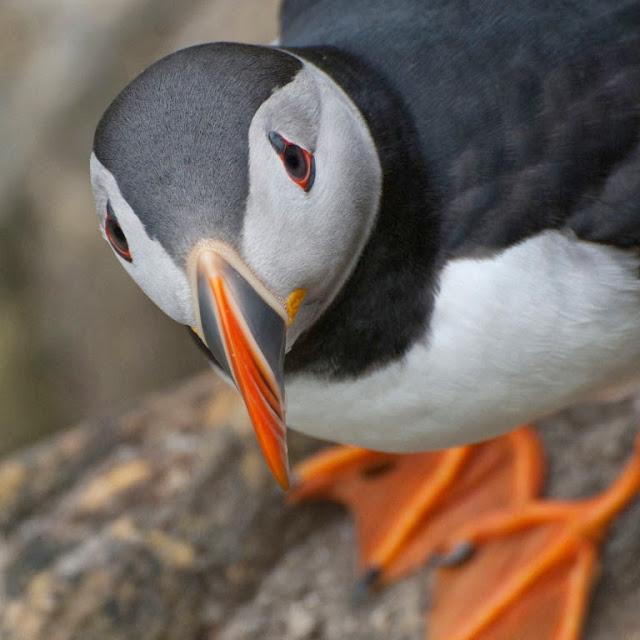 One of the big tourist draws on Shetland are the puffins at Sumburgh Head.  There are numerous places on Shetland where puffins nest, but the RSPB Reserve at Sumburgh is not only a busy location (in puffin terms) it also provides several points where puffins and people can get close together.  At times when I'm not quite sure if the tourists are there to see the puffins, or vice versa.  If you sit still the birds will come very close to get a good look at what you’re doing.  The RSPB reserve is also very close to the main airport on Shetland and during the summer it's very common for people to head straight up to Sumburgh Head as soon as they arrive, and to try and fit in a final visit to the puffins just before leaving.  We know from experience that it’s about 7 minutes from the reserve to the airport check-in desk! 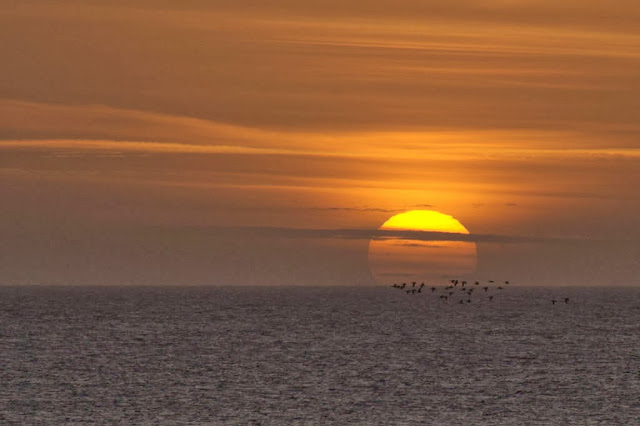 Shetland is roughly 60 degrees north.  This means that during the summer it doesn’t really get properly dark (the locals call it Simmer Dim), and in the winter it feels as if it doesn't really ever get light.  The other ‘quirk’ is that the direction were the sun sets changes quiet dramatically during the year. In the middle of summer, not only do you need to stay up pretty late to see the sunset you also need to find somewhere with a clear view to the northwest rather than the west.  In the autumn however, the sun does what it’s supposed to do and disappears due west of the islands – and if you are lucky and the weather is clear to the west, you might just see the sun dropping into the sea. 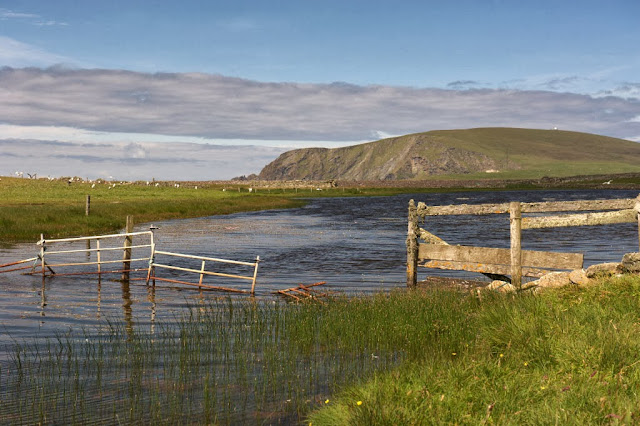 One of my favourite places on Shetland is Scat Ness.  This is one of the two south-pointing peninsulas at the south end of Shetland, the other is Sumburgh Head.  Scat Ness doesn't have the same dramatic cliffs that Sumburgh Head does, nor the Stevenson-era lighthouse for decoration, but neither does it have the volume of visitors.

Scat Ness is a place to go for peace and quite, and for a spot seal-watching and otter-spotting along with nesting terns and numerous other birds dropping in to visit the freshwater Loch of Gards.  In the background is Fitful Head, the highest point at the south end of Shetland. 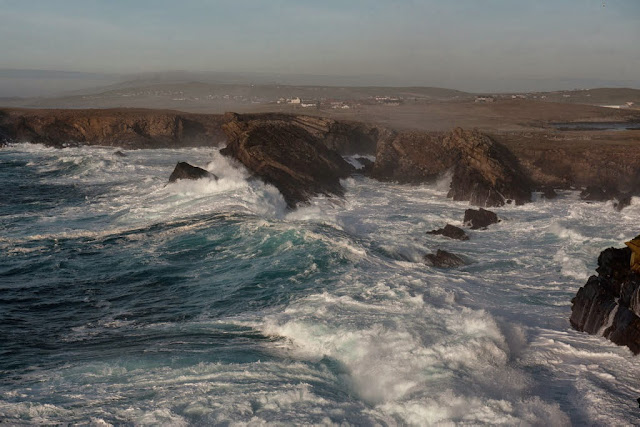 It would be an understatement to say that Shetland can be windy.

The wild winds ensure that there aren't too many trees around on Shetland, and that the buildings are all built to be capable of withstanding winds that would wreak havoc elsewhere in the country.  When the storms blow in they generate huge waves that usually batter the west side of the islands.  However, the storms don’t last forever. Every storm eventually passes, and the days after a storm are some of my favourite days on Shetland.  Sometimes the sun shines, and there are still big seas blowing in from the storm.

On these days, I will regularly go out onto the more remote parts of Scat Ness and watch the waves barrelling in against the rocks, spinning up a mist of salty spray and providing a reminder that wave power might just be worth considering.

Images from this collection are also available on the new North South Images website.

A collection of my images from remote places are going to be on show in The Boiler Room at the Jam Factory in Oxford from mid-November.

Over the next few weeks I'm going to publish a blog post about each of the regions I've included in the exhibition where I’ll tell the stories behind a few of the images. 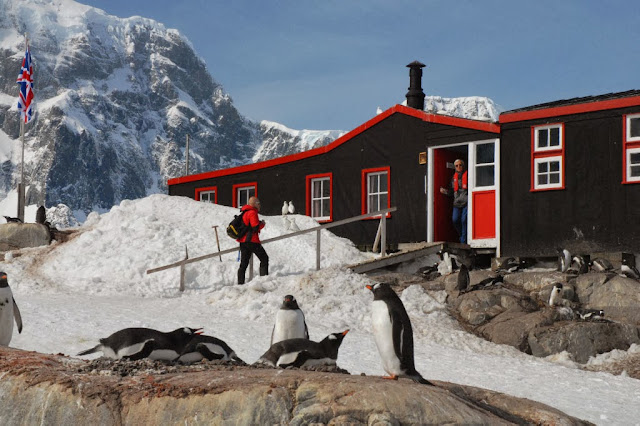 I think this is the furthest south I’ve seen the Union Jack flying.

Port Lockroy is on Goudier Island part of the Antarctic Palmer Archipelago.  The island was named for a French politican, and although the bay around the island was used by whalers in the early years of the 20th Century, the base on the island wasn't built until 1943.  In the 1943, despite or (more likely) because of the war, the Admiralty decided that it would be a good idea to establish a permanent British presence in the Antarctic.  Operation Tabarin resulted in three bases, on Deception Island, at Port Lockroy and at Hope Bay.  The Port Lockroy base was operated continuously until 1962 when it was essentially abandoned.  In 1996 the UK Antarctic Heritage Trust renovated the base which now operates (in the southern Summer) as a museum, post office and souvenir shop.  I visited the island very early in the season, so there was still plenty of snow on the ground, and the penguins were busy building nests – and stealing pebbles from each other. 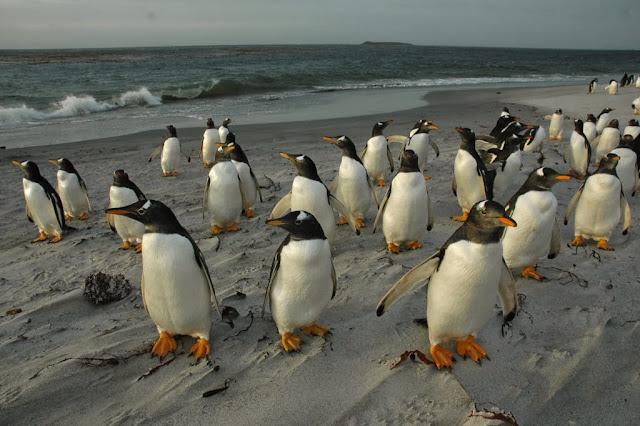 One of the highlights of my first visit to the Falkland Islands was sharing the beach with the penguins.
Each morning the penguins, on Sea Lion Island mostly gentoos, set off from their nesting sites for their morning swim.  If you go out early, and sit down on the beach (so you’re not too much taller than a penguin) you might well become the centre of attention.  Penguins are very curious birds, and they will inevitably come and investigate anything that’s on the beach and doesn't look like a threat.   On this morning, the crowds gathered and for a long time the penguins just shuffled closer and closer to see what this new visitor to the beach might want (or indeed taste like). 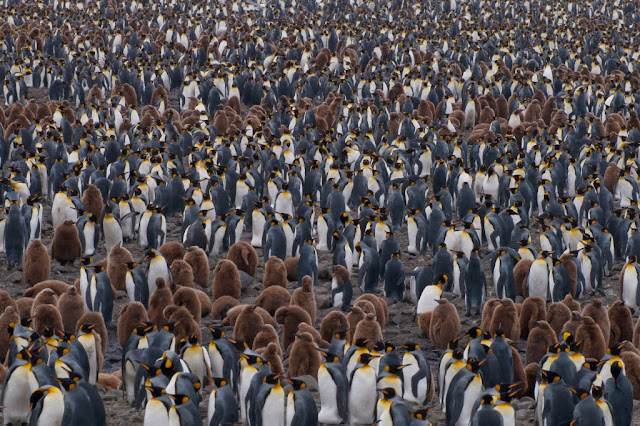 There are a lot of King Penguins on South Georgia.
Salisbury Plain is one of several beaches that are home to big colonies of King Penguins, in this case perhaps as many as 500,000 birds.  The beach is named after the other Salisbury Plain in Wiltshire, although I really did struggle to see any resemblance.  I visited Salisbury Plain at the height of the breeding season in December.  At this time the beaches are covered with adult birds, both nesting and moulting, and with last year’s chicks who are in the final stages of shedding their brown down.  The juvenile penguins tend to gather together leading to the colony appearing to have stripes of brown and black/white.  The early explorers couldn’t quite get their heads round the breeding cycle of the King Penguins, so for several years the juveniles were thought to be a separate penguins species (the woolly penguin).
St Andrews Bay, South Georgia Island 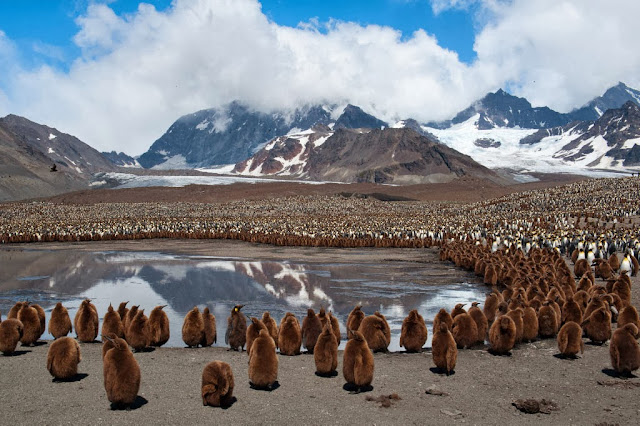 When you’re a young King Penguin, still with a thick winter coat, and the temperature starts to climb, it’s good to have a nice cool pool to dip your feet in.  This pool on St Andrews Bay is just the thing, so lots of brown-coated juvenile penguins loiter around the waters edge.  Far into the distance are thousands and thousands of both juvenile and adult penguins.

The pool looks beautiful with mountains of South Georgia reflected in it, but I wouldn't suggest the pool as a swimming stop for any human visitors no matter how warm the weather got.

These images are also available on the new NorthSouthImages website
No comments:

I've been planning for a while to set up an additional photography-based website to sit alongside my various blog sites and social media presence.

Welcome to North South Images - I'll be using this site to showcase some of my images, and to provide a mechanism to allow you to buy images ready to hang on your living room wall.

Do go and explore. 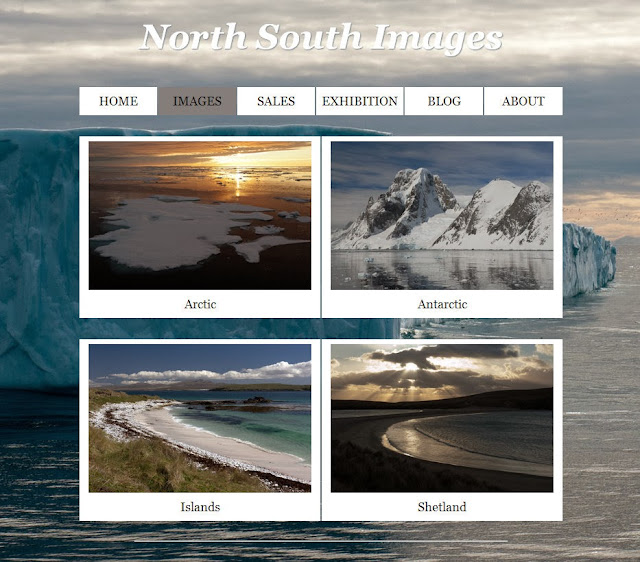 A selection of my images (some of which have appeared on this site) are going to be on display at the Jam Factory in Oxford from 12th November 2013 to 12th January 2014.

If you are going to be around Oxford over that time you'll find that the Jam Factory is a very convenient place to recover from the train journey to Oxford, a splendid place to get a coffee or something to eat and they've usually got some jolly nice pictures on show too. 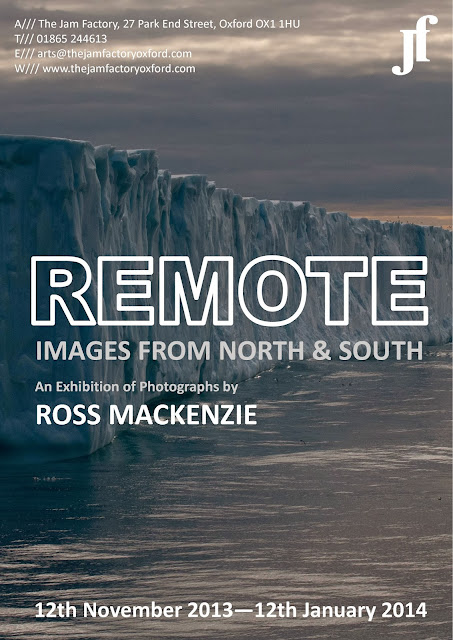