Oslo is a major tourist destination but, fortunately for me, not in February. The competition in the museums wasn't from coach loads (or, worse, cruise-ship loads) of camera-toting tourists, but from legions of back-pack-wearing primary school kids.

I decided to stick to my maritime tourist theme for this trip and after wandering along the snow-covered quay sides, found a bus to the museums ghetto on Bygdoy peninsula a few miles west of the city centre. In the summer there is a ferry across the fjord to Bygdoy, but at this time of year the 'only way is bus' - as the young women in the tourist office assured me. Since the bus is the only way, it's the route that the school groups take too. The seven year old (I'm guessing) sitting beside me was happy to chatter in English about his school trip to see the Viking boats - his English being very much better than my Norwegian. 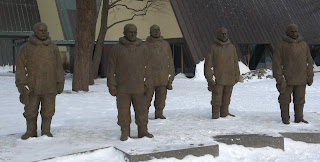 I paid a quick visit Roald Amundsen and his polar colleagues - the five of them are cast in bronze and stand looking gravely down the Olso Fjord just outside the Fram Museum - before going to see the Fram, the ship that Amundsen used on his successful trip to the South Pole in 1911. The boat itself is very similar to the Discovery I've visited a few times in Dundee, but despite being out of the water the Fram is in a much more original condition than the Discovery. 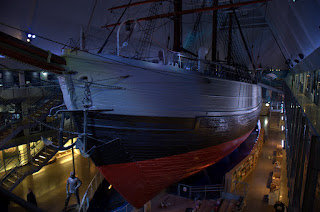 Fram was declared a museum piece in 1925 and retired when it was still pretty much in its original state when Amundsen moved on to his next ship. The Discovery went through several users who changed it to meet their needs before finally being properly 'retired' back to Dundee. I have visited the Fram before (almost 40 years before) but my recollections are I think mainly from the family photographs rather than being 'real' memories. The Fram museum has been through a major refurbishment recently, now it includes sound and light special effects (wind noises plus quite good Northern or perhaps Southern Lights effects). As well as visiting the far South Fram still holds the record for the Northern-most point reached by a wooden ship. There is also a 'freezer' room in the museum with a moving deck to give the passing tourist the sense of what the weather in the far North (or South) might be like when on board. It's probably quite dramatic at the height of summer, but is of limited impact for someone who's just arrived from Stockholm in February. Having seen and heard the Scott Centenary events in the UK, marking both Scott's reaching the South Pole in early 2012, and his death a few weeks later, it's very noticeable that all the similar Norwegian hoopla and souvenirs go big on 2011 being the Centenary. 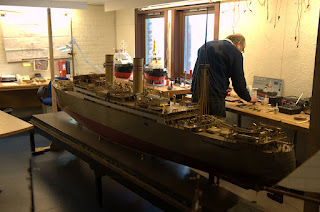 Just next door to the Fram is the Norwegian Maritime Museum, which covers about 2000 years of water-borne history from dug-out canoes though to specialist oil rig vessels and bulk carriers and has examples of some of the older, smaller boats plus fantastic models of the bigger and newer vessels. There is a really good video presentation that flies you along the Norwegian coast from the Lofoten Islands round to Oslo, and combines both modern (helicopter-shot) video footage with historical photographs from the early 20th Century. 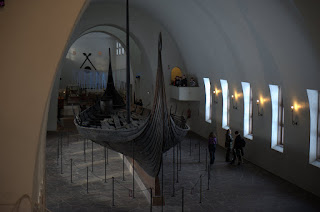 A little further back towards the centre of Oslo is the Viking ship museum - which houses three original Viking longships from various parts of Norway. All three were used as funeral vessels, and were buried with everything needed for the next life. Two of the ships look as if they could, once the ice had cleared, be moved off to the closest fjord and sailed away.

Three museums is my limit for one day, so my final stop in Oslo was Akershus Fort in the centre of the city, with beautiful views over the harbour, the city and along Oslofjord too, which almost, but not quite provided a sunset. 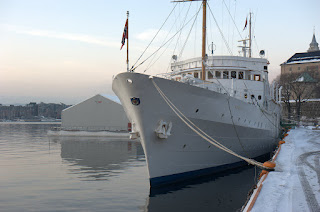 Just to round off the maritime tone that the trip is taking on, I walked past a rather smart looking motor yacht called Norge just below the walls of the Akershus - it's the Norwegian Royal Yacht. I'm told that this is one of only two Royal Yachts still in service in Europe, the other one is Danish.
1 comment:


The ﬁrst stop in what could turn out to be a maritime themed tour of Scandinavia was Stockholm.  A very quick train ride in from the airport on the Arlanda Express saw the temperature drop steadily from about 0C at the airport to -10C as we got into the centre of town. 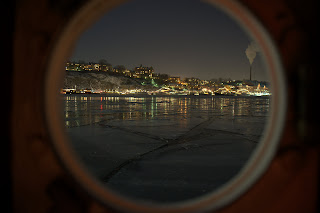 I had been looking for somewhere to stay in the old part of Stockholm, Gamla Stan, which has lots of character and is very close to the main train station, when I came across the Malardrottingen.  Originally called the Vanadis, this old motor yacht was the 18th birthday present for one of the members of the Woolworth family, it's now a small hotel moored on the island of Riddarholmen just beside Gamla Stan.  Very comfortable, with a great view across the sea ice from the porthole in my cabin. 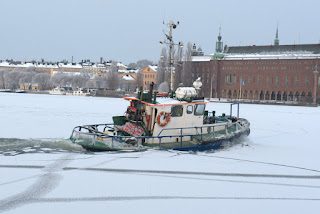 The sound of the sea ice grinding against the hull of the boat was probable less alarming for me than it was for the arctic explorers in their wooden hulled boats at the end of the 19th century.   The further reminder of where I was each morning, was the sound and sight of a little icebreaker charging round the harbour breaking up the sea ice, so that the local ferries can get around. 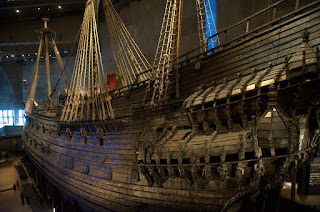 The ﬁrst stop on my brief stay in Stockholm, was again maritime themed.  I went (on one of the local ferries) to the island of Djurgarden which has lots of museums and other entertainments.  My target was the Vasa museum.  This award willing museum is built around the Vasa, a huge wooden warship from 1628.  This warship had a pretty limited military career, in fact it sank about 20 minutes into its maiden voyage.  This might have been pretty bad news for the Swedish Navy at the time (they tried at one time to blame Polish sabateurs, but eventually concluded it was just a bad design), but it's been very good news for Swedish naval historians.  The boat spent about 330 years in cold mud at the bottom of the Baltic, which turns out to be a great place for preserving a wooden ship.  The result is that there is a nearly completely intact 17th Century warship which tells us lots about both ship and the lives of the crew from that time.  There is a great audio tour (in English) on the museum website, if you can't get to Stockholm. 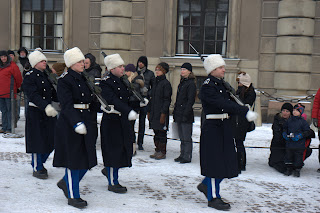 As I got back to Gamla Stan I could hear a military band in the distance, this band accompanies the changing of the guard at the Royal Palace in Stockholm.  This ceremony seems to require a lot of drum banging, wearing of big hats and foot-stamping - and given the temperature the foot-stamping would seem to be a seriously good idea, although I suspect that the foot stamping happens in warmer weather too.  I've been to London lots of times and never seen the changing of the guard - I guess there is probably drums, hats and stamping there too.  My Stockholm afternoon was spent wandering around the snowy streets and waterfronts of Gamla Stan, and of course frequenting at least a few of the many cafes that line lots of the streets.

And to round off my day in Stockholm, A big plate of Swedish meatballs, it seemed rude not to.