Travel A to Z


I was challenged to produce a travel A to Z based on places I'd been to.  Here it is - with photographs as evidence.

Last winter, while I was travelling, I did a Saturday post each week to let anyway who was interested find out what I'd been doing when I didn't need to be based in the south of England.  The blog is still there if you want to go and have a look at it.

Having spent a splendid day watching boats and waves around the southern end of Shetland, I felt inclined to  generate another short post about this Saturday - maybe I'm doing this because I had intended to get on with some writing projects this weekend.  I just hadn't reckoned on the weather.

I sat at Aberdeen airport yesterday morning watching the dark clouds overhead, and made the mistake of looking at the weather forecast for Shetland. It assured me that the rain would be starting about the time I was due to get to Shetland, was going to carry on pretty much relentlessly for the next three days.

Remind me to get a better weather forecast next time.

The shone brightly yesterday, and with the exception of one shower last night the skies were clear. Clear enough to remind me just how many stars are visible when you get away from the city lights. This morning the  skies were pretty clear again, a picture from Lerwick harbour is an indication of the cloud cover.


Having convinced myself that it was sunny in Lerwick I headed from the modern capital of Shetland to the old capital at Scalloway.  Still sunny. Still blue skies.

So back down to the south end of Shetland.  There is a little harbour at Grutness, but there isn't usually anything there - unless the Good Shepherd IV from Fair Isle is around.

What there often is at the south end are great waves.  These can be particularly dramatic when the wind is from the southwest (which it was), and there is bright sunshine around (where there was).

One of the interesting quirks of travel around Shetland is the runway extension that was built in the late 80s. Not only is there a level-crossing set of gates where the main road crosses the runway, I'm told there is only one other airport in the world that has this.  The other quirk is that when the wind is from the southwest the waves break over the western end of the runway.

And my one mistake this weekend - other than reading the weather forecast. I really should have realised that I was going to need sunglasses. On Shetland. In November.

BTW. There are a few more pictures from today on Shetland on Flickr
No comments:

Going to the Dogs


Never agree to be the last sledge out.

They don't tell you this when you sign up for a day driving a team of Siberian huskies.  Huskies are wonderful animals, huge amounts of energy, astonishing stamina and a nature that is remarkably forgiving of the novice sledge driver.  What they don't have is patience.

I was deep in the Finnish wilderness close to the Arctic Circle at a dog farm run by Marika and Lauri Sassali. "I wasn't allowed a dog when I was a boy, so now I've got 60 of them."

The sledges are tied to trees along a lane beside the farm.  Marika, "It's better if she does this, the dogs listen to her" says Lauri, works her way along the sledges attaching a team of dogs to each.  The mushers don't know what's going to happen next, but the dogs do. Their excitement builds. They know they're about to spend the next few hours doing what huskies were bred to do -  running in the snow.

Once all the teams are harnessed, the farm hand releases the front sledge with Lauri driving. The sledge tears off down the lane, round the corner and disappears from view.  This is too much for the next dog team, they want to go too. They get released. Then sledges three, four and five.  Suddenly my rope is released. The sledge surges forward. I'm standing on the brake and hanging on but we're going faster and faster.  My only printable thought. "No wonder Amundsen got to the Pole first." 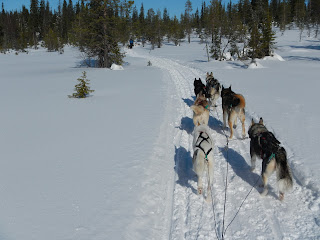 After a few minutes my dogs get sight of the teams ahead, and relax from their frantic chase into a long distance trot.

After each stop during the day, my dogs see their companions head off first and they want to go too. Each time, I'm desperately standing on the brake until the sledge ahead is far enough away to give me some running space.

And every now and again when we're running I step back on the brake to let the other sledges pull away into the distance. Confident that my team are going to see this as a challenge and, when I release the brake, put in that extra turn of speed that gives me that little extra adrenalin kick.

As I said, never agree to be last out. You might find that it's addictive.
No comments:


"Your room is on the waterline, don't leave the porthole open".

Not the usual welcome at the check-in desk. However, the Mälardrottningen Hotel in Stockholm isn't your usual city centre hotel. 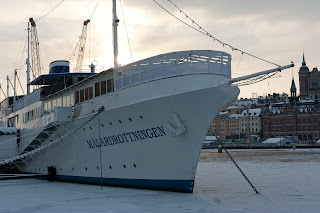 The hotel, a 90 year old motor yacht once owned by a Woolworth heiress, is now permanently moored in Gamla Stan in the centre of Stockholm and provides about 60 rooms with more character than any of the surrounding traditional hotels.  The rooms, or rather cabins, range from compact "Sailor's" cabins down on the waterline, through to the luxurious "Owner's" and "Captain's" cabins.

As soon as you walk up to reception you know that you are on the water.  The yacht isn't rigidly attached to the dock, so as the tide changes and other boats pass by, the hotel rocks gently on it’s moorings.  Throughout your stay you will expect to hear the sounds of the engines getting underway and of the ropes being cast off.  The maritime feel of the hotel is magnified by the profusion of bright brass and dark mahogany - and the navy blue and gold carpets ensure that you think nautical at all times. 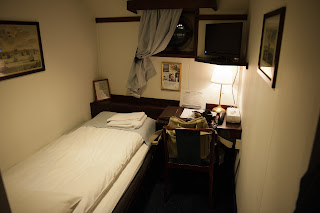 When you check in, particularly if you're down on the waterline make sure you ask for a waterside rather than a dockside cabin. The waterside cabins have views across Riddarfjärden, and in the winter at least provide all the evidence you need that you are in Scandinavia.

In winter, at the Mälardrottningen you don't have the normal city centre noises to keep you awake, instead you get the ever-changing creak and grind of the sea ice in the harbour against the hull of the ship to lull you to sleep.  Your dreams will be of the exploits of Scott, Amundsen and Shackleton and your early morning wake-up call will be the local ice-breaker clearing the way for the harbour passenger ferries.

The traditional fittings don't get in the way of needs of the modern traveller.  The cabins might shout 1920s, but the Scandinavian en-suite bathroom and the facilities are very 21st Century.  There’s really efficient heating (useful when the temperature outside is -20°C, as it was when I visited in early February), satellite TV and wi-fi.

And of course, this being Sweden, there's a snug wood-panelled sauna just down the corridor.
1 comment:

Travel in India is always a challenge.
The sheer volume of people places huge pressure of every aspect of every journey.  As a western visitor, or as one of India’s growing wealthy classes, it is possible to sidestep some of the crowds, but doing this throughout a visit misses the opportunity to sample real India.
Our opportunity came in the form of an invitation to visit friends in Vellore while staying in Bangalore just over 200 km away. “An easy train journey, just come for the day”.
The first challenge is getting a ticket.  The number of travellers mean that you can’t just turn up and travel, and buying a ticket means you seem to need to talk to most of the 1.4 million people employed by Indian Railways. You need to find the right booking office. You need to pick a train, there a lots of choose from.  You need to pick a class of travel, it’s not just first or second.  You need to decide if you want a confirmed booking or just to be wait-listed.  All these decisions should be easy, but everyone involved in the transaction has an opinion, as do lots of bystanders. “First Class air-con.Very comfortable”. 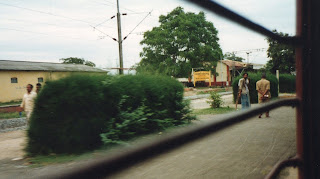 Eventually we find our way through the station crowds, a mix of travellers and others apparently just milling around watching the travellers, and start to negotiate the complexities of the ticketing scheme.  We identify a train. We decide on “non air-con”, previous experience telling us that air-con means you can’t see out of the windows.  We even get a confirmed ticket for at least part of the journey. Success.
We haven’t got anywhere yet, but we’ve managed the first step of being an independent traveller in India.
No comments: 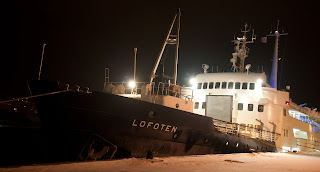 It’s four o’clock in the afternoon and it’s already been dark for hours.  Today, as every day at this time, the south-bound Hurtigruten steamer stops briefly in the little Norwegian town of Vardo.
Not much happens in Vardo. Particularly in winter. The temperature is way below zero. The air is cold enough to sting as you breathe in. Everything is quiet.  The layer of snow on the ground deadens all sound.  The gently falling snow keeps everyone inside the brightly lit houses. 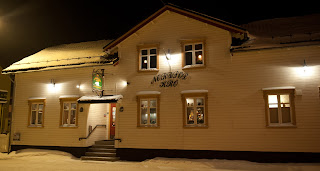 Through the treble-glazed windows of the “Nord Pol” bar I can see, but not hear, the locals sipping “Arctic” beer from the Mack brewery.
The only sign of outdoor activity in Vardo is down in the harbour.  A few packages are winched off the steamer and deposited into the snow on the quayside, before being hauled into the warehouse.  Further along the quay, a solitary small fishing boat comes in out of the darkness, and its two man crew unloads the fresh cargo in thickening snow flurries.
After a few minutes, the ship sounds its plaintive warning hooter summoning any stray passengers back aboard.  After another few minutes, the gangway is hauled away and the ship pulls out into the fjord.  The harbour gate clangs shut and lights start to go out. Vardo fades back into silence. The snow continues to fall.
No comments: