Ross Mackenzie has been talking to himself again… 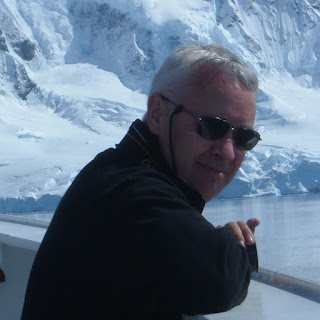 So when did the malady first appear?
The first evidence of an outbreak of polar fever was when I was at school.  I felt drawn to do projects on exploration and science in the Antarctic. Fortunately the symptoms seem to have been at least temporarily calmed by an intense application of books and visits to libraries.

And the first recurrence?
Was when I was finishing a physics degree.  I got as far as filling out the paperwork to join the British Antarctic Survey, but for reasons that escape me now, it seemed like a good idea to volunteer to spend three years sitting in small dark rooms at Bristol University rather than overwintering in small dark rooms in the Antarctic.

Did that get it out of your system?
It certainly seemed to have done, until late 2006.  I’d been doing quite a lot of travelling to hot places and there seemed to be a reaction, initially appearing as an urge to drive north at the slightest provocation.  I once got as far as the Arctic Circle before I was able to turn the car round.  My first attempt to properly address the problem by visiting was to book a trip on the MS Nordkapp from Ushuaia down to the Antarctic Peninsula in early 2007.  That plan ran aground, as did the Nordkapp, and my trip was cancelled at short notice.

So, what did that do to the symptoms?
Made them much worse.  After consultation, my travel agent agreed that there was no alternative therapy other than to arrange treatment in both the Arctic and Antarctic as a matter of urgency.  So in summer 2007 I flew north to Greenland to see icebergs, and in autumn south to Ushuaia to attempt to see real ice.  Of course that southern trip wasn’t without tensions.  The fear, and the fever, that my first peninsula trip would be pulled away again was triggered by getting the news, as I waited to fly south from Santiago to Ushuaia, that another polar ship (this time the MS Explorer) had foundered in the Bransfield strait just north of the peninsula.

That must have been a bit scary?
Not as scary for me and my fellow travellers as for the passengers and crew on the Explorer.  They were all rescued, and we paid much more attention in the safety briefing than we might have done otherwise.

And was the trip worthwhile?
Absolutely.  The polar fever symptoms cleared completely as we crossed the Drake Passage, and the first penguins came into view.

So, did that get it out of your system?
Um, No.  I think the symptoms came back as the boat lurched back across the Drake Passage heading northwards.

I suppose the next fix was to see if going all the way North sorted the problem.
Yes, that was right.  Although I did experiment by visiting the Falkland Island to see if they were remote enough to calm the symptoms, before going to northern Norway and then to Svalbard in 2010 to see if polar bears were sufficient to chase the symptoms away.  Again the relief of symptoms was only temporary.

What were you left with as the next remedy?
I tried another course of intensive travel going all the way to South Georgia, not quite Antarctica but well inside the Antarctic Convergence, then quickly up to the real Nordkapp (as opposed to the ship) at the northern tip of Norway.  Again the relief from the urge to be in polar places was temporary.

Have you given up trying to find a cure?
Absolutely not.  I haven’t tried going to the Northwest Passage yet. So that’s the next course of treatment.  But I’m not optimistic that even that will cure me, so I’ve already started planning for another southern remedy.

Have you considered hypnotherapy rather than air miles?
No.