I don't have a good track record on going back to places - at the end of lots of trips I can be heard saying "I must go back there".  The reality is that the attraction of things and places I haven't seen often, even usually, over-rides the lure of the familiar.  The other problem is that if a holiday is really good, there is the risk (perhaps more percieved rather than real) that the repeat visit won't be as good and the memories of the first perfect trip will some how be sullied.

In early 2009 I spent an excellent two weeks in the Falklands, and this month I've just spent another fantastic two weeks island hopping in the Falkland Islands. In some ways this was a repeat of the 2009 trip, the key differences being that I opted to come south via Chile rather than using the MoD air-bridge from Brize Norton, and I've come much earlier in the southern hemisphere summer.  The birds are either sitting on eggs or are tending to small chicks rather than contempating their autumn migrations.

As with the last trip I opted to spend longer periods on a few islands, rather than trying to visit lots of islands for small periods of time.  I've spent time at Darwin and Stanley, both on the East Falkland mainland at the start and end of the trip respectively.  It is possible to fly out to the islands immediately on arrival off the international flights, but it does require significant faith in the punctuality of the incoming flight (and in 2009 I was over six hours late).  Most people spend a night or two within driving range of the main airport at Mount Pleasant at both beginning and end of the trip. Both Darwin and Stanley have some attractions and interest for both wildlife and history tourists, but for me the real Falklands is out in the islands amongst the wildlife.  I had long blocks of time on two similar but very different islands.  Sea Lion and Carcass Islands are similar in that they are small (i.e. walkable) islands with very good accommodation (including excellent cooking).  They are different in that they are at opposite corners of the of the islands (one in the south east, the other in the north west), and in that Sea Lion is flat while Carcass is mostly rocky and hilly (with just enough flat space to land a FIGAS plane - although the owner of Carcass assures me that the RAF have checked out the ground around the airstrip to confirm that it would be possible, in emergency, to land a Hercules). 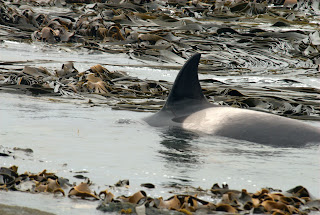 On Sea Lion, the stars of the show this time really had to be the orcas, who regularly put in appearances spectacularly close to shore, with a close second being the ridiculously cute gentoo penguin chicks.  This, of course, in addition to the kelp and dolphin gulls, the rock and imperial cormorants and the huge number of snipe which lurk deep in the undergrowth where you can only see them if they move or decide to start announcing their presence. 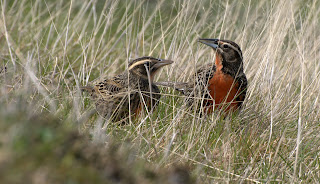 On Carcass there were a lot of the same birds as on Sea Lion, however the Johnny Rooks were very evident, around the settlement at least partly because of Roldan's - the chef - habit of feeding them on a regular basis. I watched over 30 Johnny Rooks follow him down to the beach one afternoon - looking very much like the Falkland Islands answer to the Pied Piper.  It was particularly good to see a pair of magnificant Crested Caracaras roughing it alongside their distinctly more rogue-ish cousins the Johnny Rooks (Striated Caracaras).  However, my favourite birds on Carcass were probably the long-tailed meadowlarks and the Cobb's wrens, both very visible, and with a litle bit of patience ready to be photographed. 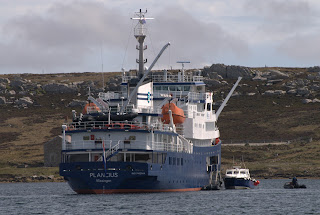 From Stanley, I now join the Plancius for a two week trip to see South Georgia. The boat is sitting in bright sushine in Stanley Harbour as I type, busily off-loading the current passengers to connect with the regular weekly LAN Chile flight.

Even as I sit contemplating South Georgia, I can't help thinking about when I'll be able to get back to the Falklands and what I'd want to do on that trip.  Maybe February?


Logistics and thanks.  I flew into the Falklands with LAN Chile via Santiago, and my local arrangements were sorted by Arlette Bloomfield at Falkland Island Holdays.  In Darwin I stayed with Graham and Fiona Didlick at Darwin House.  On Sea Lion Island I stayed at the Sea Lion Lodge with Jenny Luxton, on Carcass stayed with Lorraine and Rob McGill, and finally I stayed with Arlette Betts at Lafone House in Stanley.  The UK end of the arrangements were made via Sue Grimwood at Steppes Travel.  Thanks to every one who's looked after me over the last couple of weeks, without exception the accommodation and hospitality has been wonderful - and the food, in terms of both quality and quantity just amazing.